From its beginnings more than 75 years ago, Duke's Pratt School of Engineering has grown into one of the fastest-rising in the nation

On June 3, 1939, the Duke University Board of Trustees approved the creation of the College of Engineering—establishing the school as a cornerstone of the young university.

From its beginnings as an undergraduate college with just three faculty members in each department and only 201 students, the School of Engineering has grown into one of the nation’s fastest-rising engineering programs, with nearly 3,000 faculty, staff, and students, 15,000 accomplished alumni, a vibrant research engine and a record of trailblazing achievements that benefit people all over the world.

View a text version of this timeline.

A Brief History of Engineering at Duke 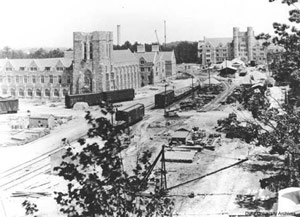 The Pratt School of Engineering traces its history back to 1851 when Normal College, a forerunner of Duke University, advertised a Classical course which included engineering for seniors. Normal College became Trinity College in 1859, and engineering was introduced in 1887. The first student to graduate with an engineering degree was C.E.D. Egerton in 1903.

When Trinity became Duke University in 1924, engineering underwent vigorous development. In 1927, engineering was organized into separate departments of civil and electrical engineering. The Department of Mechanical Engineering started in 1931.

Growth in engineering at Duke in the 1930s closely paralleled the larger departments in arts and sciences. In 1930, there were four faculty members; and in 1938, there were nine. By 1930, 101 students were studying engineering. When Duke established the Division of Engineering in 1937, there were 167 students.

A College Is Born 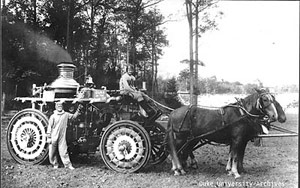 Following a study that concluded further advancement of engineering was justified, Duke's Board of Trustees authorized the formation of the College of Engineering in 1939. William H. Hall, who joined the Trinity faculty in 1915 to teach civil engineering, was named the first dean of the new college.

With engineering alumni active and organized from 1937 onward and with a student body that had grown to 201 in 1939, the college was on its way. Students in each department competed to show off the latest technological marvels, such as the electrical engineers' display of a newfangled telephone-television booth.

By 1937, engineering at Duke had 30,000 square feet of space on East Campus, six times what it had a decade earlier. Engineers were the only men living on East Campus until they moved westward after World War II to join the students of Trinity College of Arts and Sciences. 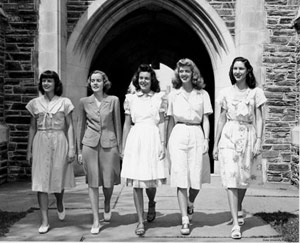 Engineering at Duke grew quickly during World War II in response to a national shortage of engineers. The first women graduated from the College of Engineering in 1946, and all three engineering departments moved to West Campus in 1947 to a new building that became known as “Old Red” (now named Hudson Hall).

In 1951, the university created the Research and Development Program for Engineering, which eventually led to a graduate program and was the foundation for what would become a major national engineering research effort. The R&D program was led by Walter J. Seeley, who came to Duke in 1925 to teach electrical engineering. He became dean in 1953. 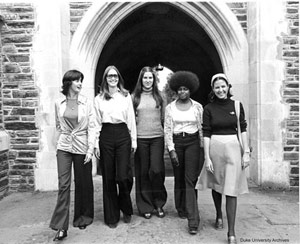 The doctor of philosophy degree was offered in electrical engineering in 1960, followed by a Ph.D. in civil engineering four years later.

James L. Meriam, a professor of mechanical engineering at the University of California, Berkeley, was appointed dean in 1963. The college was named the School of Engineering in 1966 and the school's first black students graduated two years later.

The Division of Biomedical Engineering was established in 1967 and in 1971 it became a department--the first ever at a United States university.

George Pearsall was named dean in 1969 and three years later the Engineering Annex to Hudson Hall opened. In 1974, Aleksander S. Vesic, who joined Duke as a professor of civil engineering 10 years earlier, was appointed dean. After Vesic died in 1982, Pearsall stepped in as interim dean until Earl H. Dowell moved to Duke from Princeton to become dean in 1983. 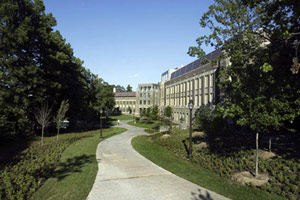 Kristina M. Johnson joined Duke as engineering dean in 1999. Later that year the school was named for 1947 electrical engineering graduate and philanthropist Edmund T. Pratt Jr., who endowed the school with $35 million. It was at the time the second-largest gift in the university’s history, surpassed only by the original gift from James B. Duke to transform Trinity College into Duke University.

In recent years the school has dramatically grown its external research funding and major nationally-awarded research centers, its faculty size and prominence, and its student body and selectivity, making Pratt the fastest-rising engineering school in the country in terms of national rankings.

Duke Engineering Through the Years