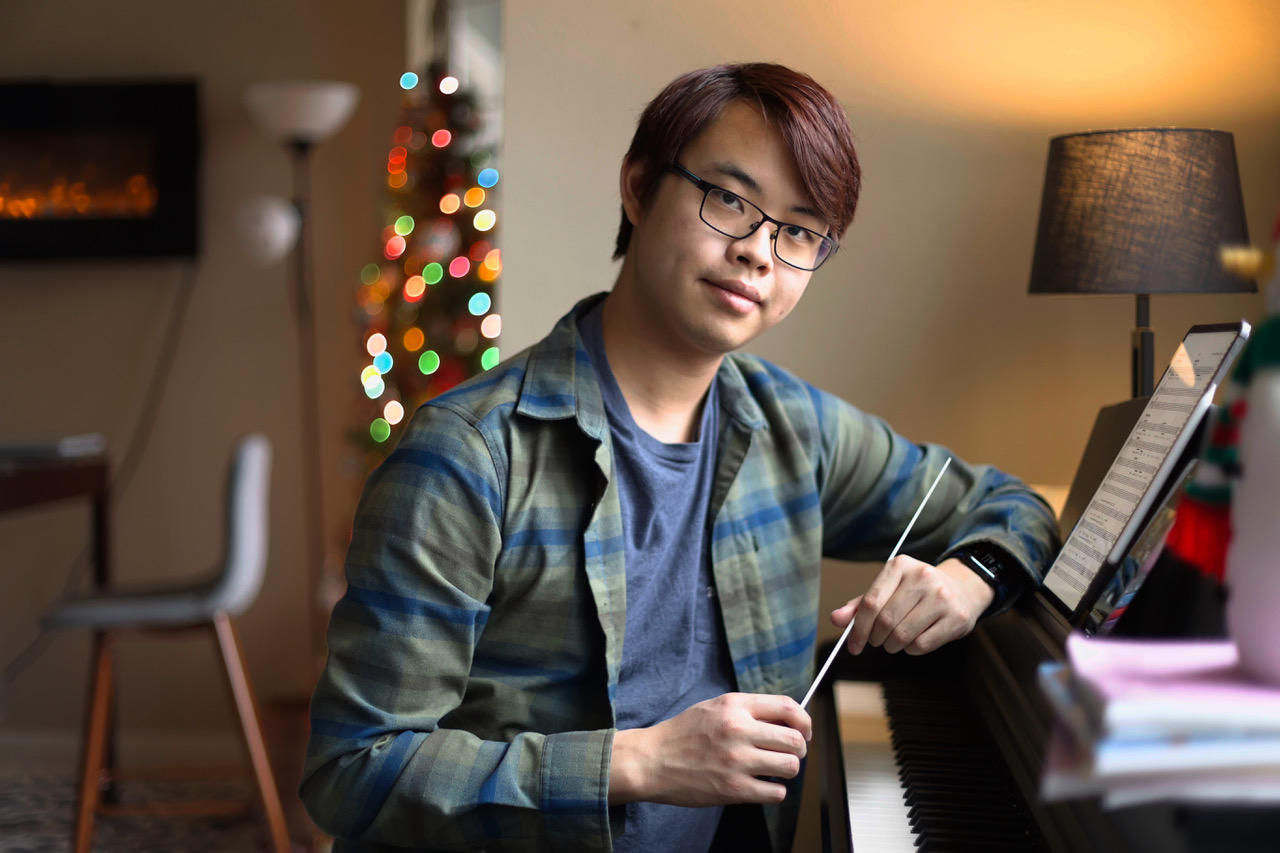 Yi Chen ’22 has studied the piano since the age of five and even entered Duke as a prospective music major, concentrating on composition and theory

“I had the thought that I was going to study music and neuroscience, actually,” said Chen. “Music is one of the best examples of applied neuroscience, in the sense that it's all about the creation and release of tension.”

In the Western harmonic system, explained Chen, a specific progression always creates the same expectation in the listener. “Classical composers’ music is so popular because they are very good at creating those expectations with their harmonies—and then either fulfilling it or not fulfilling it, depending on what their goal is,” he said.

Chen quickly progressed toward a music major, finishing most of the required coursework by the end of his second year. He found he had enough time left at Duke to be able to branch out and explore more of what the university had to offer.

“I've always been interested in tech stuff,” said Chen. “I was looking at courses I could take, and I thought, ‘You know, I really want to add computer science to the mix.’ So, that's what I did first, and after a few months, I realized I was having a lot of fun. But software alone didn’t feel like quite enough for me."

Chen took his first class in the Department of Electrical & Computer Engineering (ECE), and soon he stepped off the academic path he had chosen. He declared a double major in Computer Science (CS) and ECE, minoring in music.

As a Pratt Research Fellow, Chen worked in the lab of Stefan Goetz, an assistant professor of psychiatry and behavioral sciences, neurosurgery, and ECE. Goetz is part of Duke’s Brain Simulation Electronics Lab, which focuses on electronics powered by brain stimulation—an intersection that fits well with Chen’s interest in engineering and neurosciences. Under Goetz’s supervision, Chen has been working to further the development of a new kind of drive train for electric vehicles.

A traditional battery pack has hardwired connections between battery terminals, and voltage is always high. But the multi-level, modularized series-parallel converter, or MMSPC, replaces physical connections between the batteries with wave-producing transistors that can be switched on and off, sending an adjustable alternating-current (AC) signal directly to the motor.

The MMSPC allows the team to rewire all the cells in a battery pack depending on the level of voltage they want to send. They can even choose to route around single battery cells if it’s a more effective strategy. For engineers working on squeezing the highest range out of electric vehicles between charges, it’s a particularly useful concept.

“The amount of range you get from a battery pack is limited by its least effective cell,” explained Chen. “Once one of the cells drops to a certain voltage, you can’t use the battery anymore without charging the entire pack. A system like ours is very beneficial because if one cell’s voltage dips significantly lower than the others, you could just route around it while still tapping into all the other cells.”

Chen has also been working to distribute and balance charge across all the cells, to prevent voltage from dropping in the first place.

“Balancing the cells solves a fundamental problem of batteries right now,” said Goetz. “No two battery cells in a pack have exactly the same properties—there’s always one that is far worse than the others, that limits overall performance.”

According to Goetz, balancing the charge also solves performance issues related to overheating, self-discharge, cell capacitance, aging and cell death.  Chen admitted that he felt out of his depth when he inherited the project from Zhongxi Li, an ECE doctoral student in Goetz’s lab.

“There was already an array of batteries with circuit boards on them and most of the control system. So, I had to learn and to understand how phase AC motors are driven, what field-oriented control is, what trapezoidal control is … just a lot of things to learn,” Chen said.

His first semester was spent doing exactly that: learning.

“That period of time was actually very productive for me because that's when I learned to design circuit boards, how LabVIEW works, and about motor control and some power electronics concepts. Even given a short amount of time, you can learn a lot about a whole bunch of things if you really want to,” said Chen.

“In the next few weeks, I'm going to try to quickly make a mounting plate for the motor on the vehicle to see if I can start getting the system onto the vehicle. I guess my goal is that it drives by the time I graduate,” he said.

After that, Chen will be busy with another different challenge: he’s beginning a PhD program in electrical engineering at North Carolina State University at Raleigh, developing wearable biosensors in the lab of professor Alper Bozkurt.