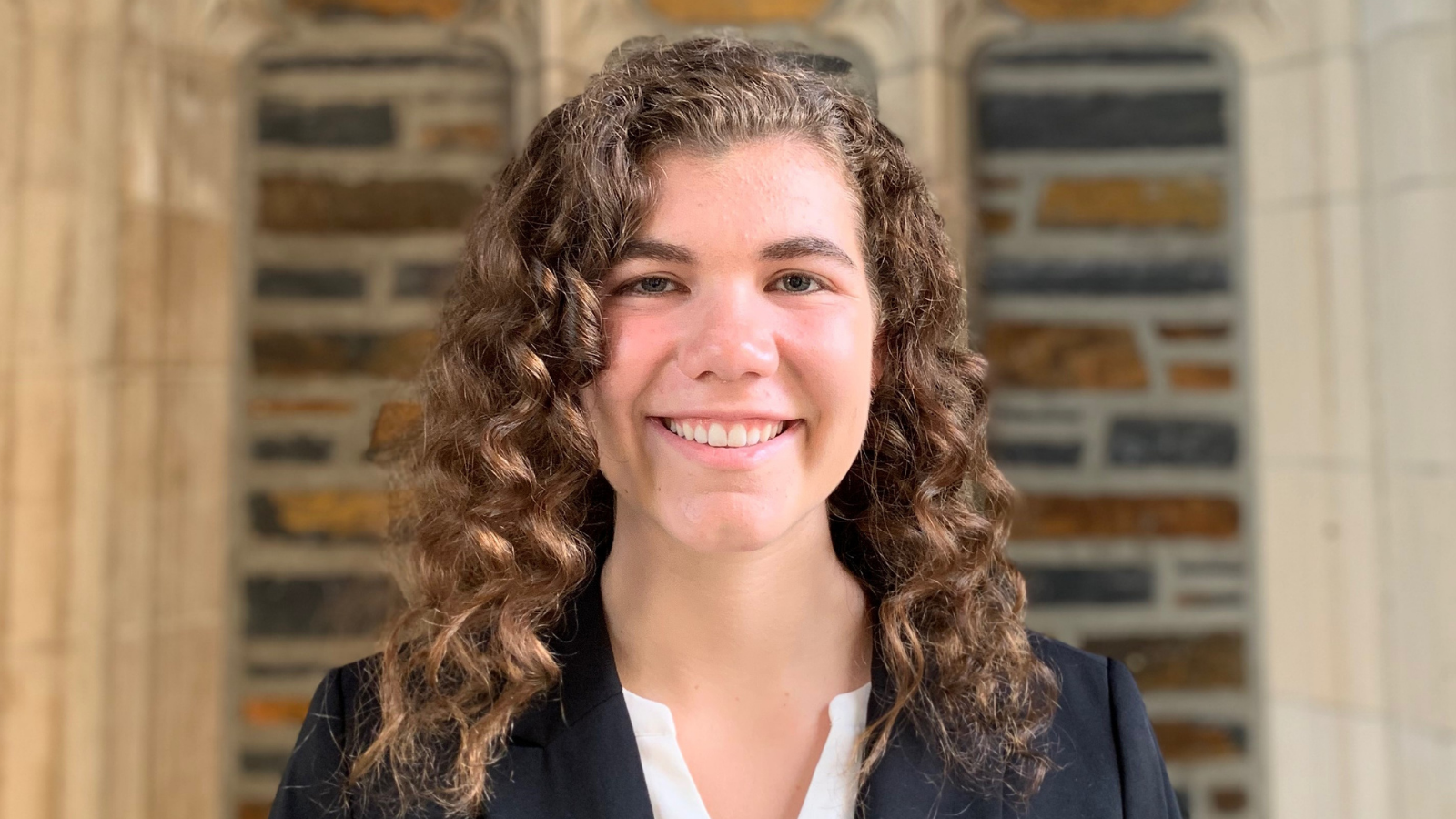 When the global pandemic forced then-sophomore Becca Lau home from studying abroad, little did she know that this initially disappointing pivot to remote learning would open an entirely new side of engineering research for her, and a pathway to a PhD program

Lau, who was all set to take in-person and focus on the mechanical and energy engineering aspect of her degree program with an internship at a German renewable energy company, returned to the U.S. in search of a remote option to replace the internship.

The pivot point in March 2020 was her bold email—without a prior introduction—to Volker Blum, an associate professor of mechanical engineering and materials science, asking for a remote research opportunity.

"The Pratt Research Fellowship was huge for me with regards to pursuing a PhD. Being able to work closely with an established faculty member in materials science really made me enjoy the subject and appreciate the concepts beyond what any class could,” Lau said. “My experience as a Pratt Fellow also made me realize that research is something I see in my future because it’s a never-ending chase of trying to make sense of the world around you.

“I see climate change happening. As an engineer, I want to fix things and make the world better."

“I actually became more computationally focused because of the pandemic, and it worked out for the best because now I’m really interested in learning the smaller details and learning what calculations go behind the research. I could observe how the concepts I learned throughout my courses applied to understand something seemingly unrelated—nanostructures. What's happening in the simulation, and how can we interpret these results? And it's neat because I get really excited when my calculations match experimental results, and you see this validation that happens on both sides.”

Lau is referring to her work with the HybriD3 database and with computational materials science for nanomaterials engineering in Volker Blum’s group.

“Coincidentally, he's from Germany. So, the first time we talked, halfway into the conversation, when I mentioned I was sent home from the Duke in Berlin for Engineers Program, he switched to speaking in German, and so did I,” said Lau, who is fluent in the language.

She has stuffed her proverbial backpack with about as many achievements and experiences an undergraduate possibly can. In addition to her excellent classroom and undergraduate research performance, she has lead student clubs and played saxophone with the Duke University Marching Band at the Sweet Sixteen and Elite Eight rounds in San Francisco and the Final Four round in New Orleans of the NCAA Men's Basketball Tournament. 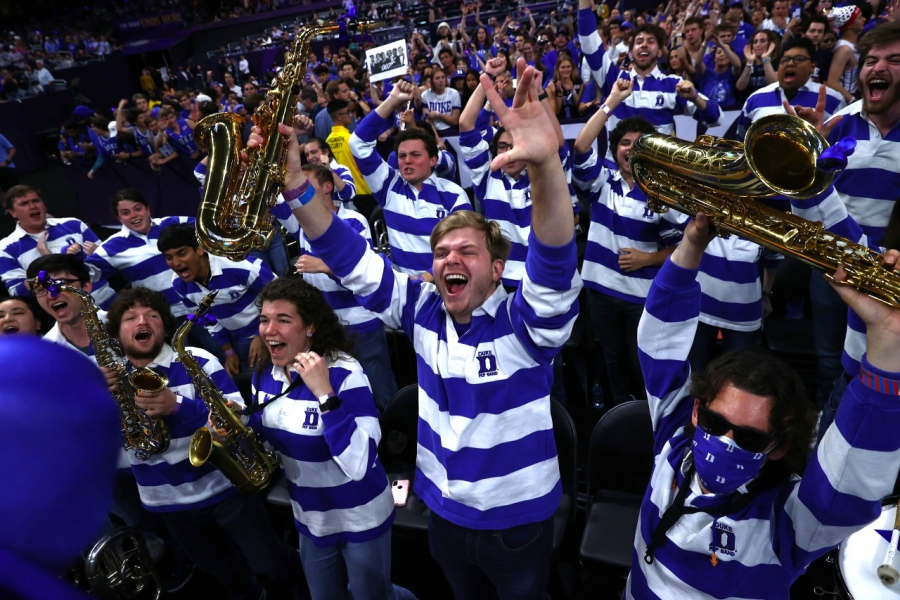 “We set up a mini-Perkins [library] in the lobby of the hotel in San Francisco and did our schoolwork together when we were not practicing or playing at the games,” she said, adding that the band still found time to rent bicycles and ride across the Golden Gate Bridge.

“She's an astounding student. She does a lot of things at the same time, and she gets a large number of things done,” said Blum, who was both her GCS and Pratt Research Fellowship advisor. “And she's optimistic. She's a fantastic team player and a fantastic team leader.”

The GCS program wraps around an undergraduate’s entire undergraduate engineering experience by requiring many components all tied to one of the 14 Grand Challenges that the NAE has identified as necessary to address “to achieve a sustainable, economically robust, and politically stable future for our children and children’s children.” Lau chose “Restore and Improve Urban Infrastructure” as her theme and completed a Pratt Research Fellowship to fulfill the independent research requirement.

“I am passionate about improving modern infrastructure—particularly, energy infrastructure—as well as closing the disparity between regions that have resources and an established infrastructure and regions that do not,” Lau wrote in her electronic portfolio. “I am particularly focused on developing more efficient renewable energy systems that can satisfy the demands of a growing population in a sustainable and environmentally-friendly fashion.” 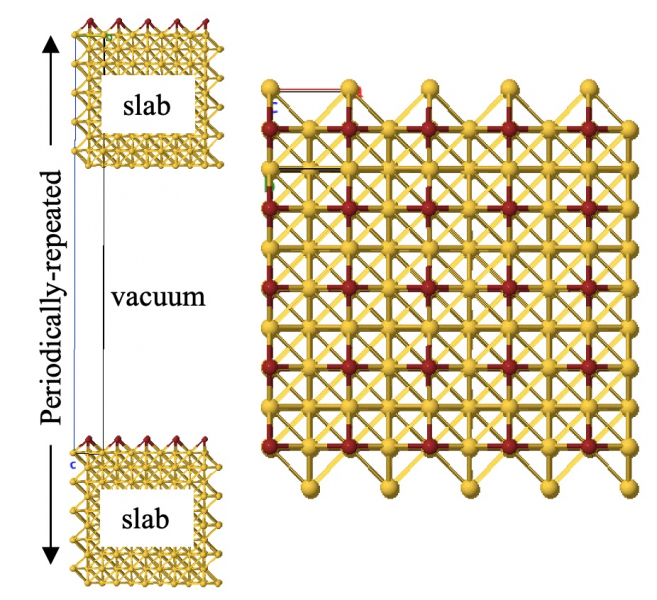 Her three-semester Pratt Research Fellow project enabled her to understand the mechanisms behind and to develop a rational pathway toward designing nanomaterials with tailored shapes. Such materials are studied experimentally in Ben Wiley’s lab at Duke, whose work served as inspiration for Lau’s computational simulations in Blum’s lab. In the process, Lau became proficient in simulation techniques that researchers can apply across a host of challenges in materials science, such as third-generation photovoltaics, fuel cells and lithium-based batteries. Wiley is a professor of chemistry who co-supervised Lau with a team of four other students on a Bass Connections research project in 2020-2021 to design an alkaline water electrolyzer and hydrogen storage system as a less-expensive alternative for heating and cooking fuel than electricity from an electrochemical battery in developing nations.

Lau’s project used the first principles approach to materials science, meaning she employed the fundamental laws of quantum mechanics and thermodynamics to predict the behavior of the nanomaterials in her study.

Specifically, Lau studied the mechanisms driving the growth of shape-controlled gold nanostructures in bromine-containing environments. She showed that different surfaces of gold nanocrystals immersed in a solution containing bromine, chlorine or iodine atoms can be covered by different amounts of these atoms even when in the same solution. The different surface coverage creates a pathway to chemically grow gold nanocrystals with deliberately chosen shapes for specific applications.

In addition to Lau’s brief time in-person in Berlin and subsequent remote work, she also met the global requirement of the NAE GCS program with her role as quality control manager of the Siatha Pedestrian Footbridge Project in Bolivia as a freshman supervised by Civil and Environmental Engineering Professor David Schaad, who also leads Duke’s NAE GCS Program. She also completed entrepreneurship, service-learning and interdisciplinary requirements and wrote a 35-page thesis.

“I see climate change happening. As an engineer, I want to fix things and make the world better,” Lau said. She will continue her studies as a PhD student this fall in materials science and engineering at Stanford University.