Yiyang Gong will join the faculty of the biomedical engineering department in Duke University’s Pratt School of Engineering beginning November 1, 2014. An expert in nanophotonics, Gong is developing genetic sensors that literally light up the brain.

Gong began his career designing optical communications devices. While working on his PhD, he started to explore how he could apply optical technologies to study biological phenomena. Rather than using light to help people send information, he decided to use it to understand how neurons send information. 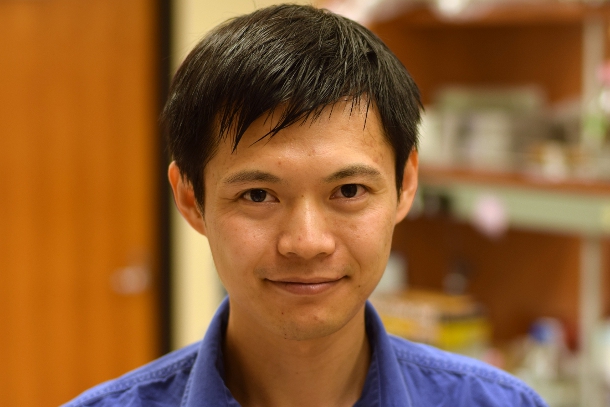 “In between my PhD and postdoc I made a rather large jump into biology, which in retrospect might have been a little rash,” said Gong, who completed his PhD and worked as a postdoc at Stanford before joining Duke. “But in the end it worked out great.”

Long fascinated with the microbiology of the brain, Gong is now working to get a detailed microscopic view of how neurons communicate with each other. His goal is to develop genetic sensors that glow in response to neural signals, as well as the microscopy tools to record these flashes of light within a live brain.

He has already made significant progress in engineering such sensors—bits of DNA that can be delivered to neurons, usually through a virus. Once embedded, the DNA encodes a protein that sits on the cell membrane and responds to voltages coming from the neuron.

Gong’s goal is to be able to target specific types of neurons—there are more than 30 in the cortex alone—with his genetic sensors. If sensitive enough, the sensors should be able to directly record the various types of voltage waveforms that different neurons create. The past few years have seen Gong improve the sensitivity of these genetic sensors and successfully demonstrate their use in cell cultures, intact tissues and, in his most recent paper, a live mouse.

“Historically, the best way to image neural signals on the cellular scale in parallel has been by imaging calcium flows, which is sort of a proxy for the actual neural voltage,” said Gong. “While it is a valuable tool, the method can’t record certain types of waveforms and can’t isolate single action potentials except in special preparations, whereas my genetic sensors can do both. Direct optical recording of cell communications would be a very powerful tool.”

Already looking ahead, Gong sees many avenues for collaboration across Duke’s campus. Besides continuing to develop and optimize his genetic sensors, he will need a hand developing optical tools to record the sensors’ fluorescence inside living tissue. And once he is able to record those signals, he’ll need help processing the large amounts of complex data generated.

He sees areas of strength that can help address both challenges in Pratt’s engineering departments, as well as across campus.

“The neurobiology and neuroscience departments, along with the Duke Institute for Brain Sciences, are very strong,” says Gong. “And of the faculty I’ve already spoken to, they’re very open to trying new imaging and optical technologies. The medical and biology programs also offer great intellectual resources and opportunities to collaborate.”