What Lives in the Rainforest?

Picturing Flora and Fauna
After advancing to the Ocean XPRIZE finals in 2018 and dipping its toes into the ANA Avatar XPRIZE in 2019-20, Duke has its eyes on another XPRIZE—this time, the $10 million Rainforest XPRIZE, which aims to catalogue the astounding biodiversity thriving under the rainforest’s dense, near-impenetrable canopy.

Associate Professor of electrical and computer engineering Martin Brooke is again leading the Duke effort, alongside collaborator Stuart Pimm, the Doris Duke Professor of Conservation Biology at the Nicholas School of the Environment. The two are orchestrating small teams of students as they develop drones that can deploy to identify and count plants and animals. One of those teams this semester (Grayson Elias, ECE/CS ’21; Natasha von Seelen, ECE/CS ’21; Jacob Thomas, ECE ’22; and Umika Paul, ECE/CS ’21) plans to use infrared cameras to identify expertly camouflaged birds and mammals.

“The IR imaging works best at night and in the early morning, before the trees and ground get so warm that it’s difficult to distinguish animals from background,” explained von Seelen. “It will be very useful when non-thermal-photography drones cannot see very well. We are working on software that would recognize areas with high heat signatures and then alert the drone pilot to take a closer look and try to determine what kind of an animal it is.”

The infrared sensor illuminated a nearby mourning dove that was hidden so well it was indiscernible to the naked eye.

The team took some test footage around their homes this semester, using the infrared cameras. Elias captured footage of his dogs that let the team see them as a python or anaconda would—as areas of active warmth in a cooler environment. And von Seelen, in working to distinguish squirrels from their arboreal background and track their motion, found that the infrared sensor illuminated a nearby mourning dove that was hidden so well it was indiscernible to the naked eye.

But cataloguing biodiversity isn’t limited to fauna; each thread of the rainforest’s vegetative tapestry must be identified, too. Of the Duke students working on this aspect of the challenge, half were on campus this semester, and took charge of the drone that will one day deploy to take photos in a rainforest ecosystem. Those students tested flight maneuvers and controls and suggested settings that will one day help pilots navigate their drone through the densely treed environment. The other two students, Carrie Hunner and Harry Ross, both ECE/CS ’21, started developing a plant identification app, working remotely from their home bases in Minnesota and New York City.

“We laid a really good foundation,” said Hunner. “We have a working app that interfaces with Google Photos, letting the user select photos to show to the identification algorithm. The user gets back a list and a score. For example, ‘There is a 50 percent chance that the plant you’re showing me is a rosy periwinkle.’” 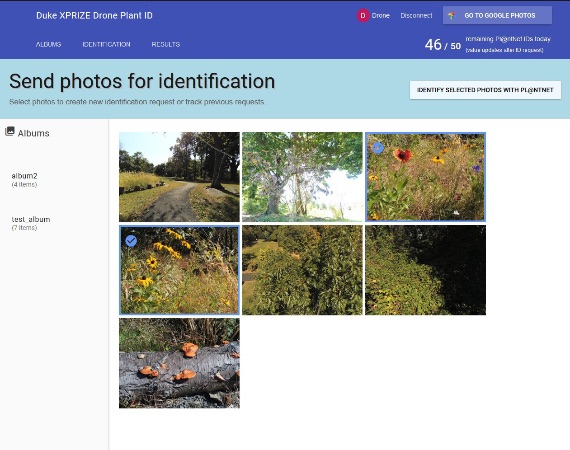 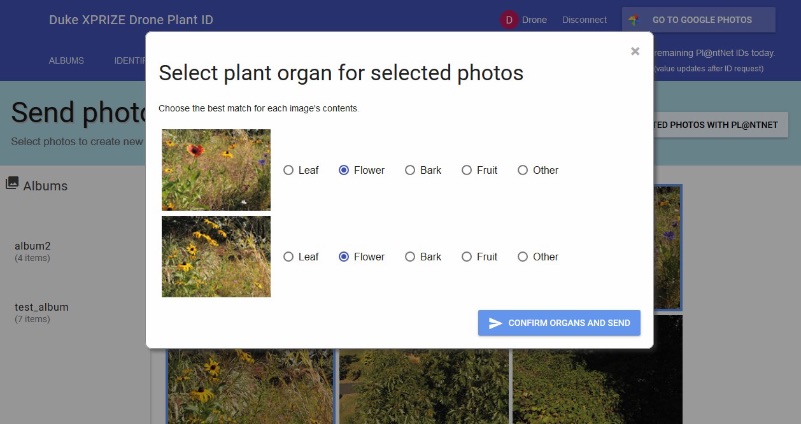 But Ross acknowledges that the identification algorithm they’re using was trained on a limited dataset of plant images—a gap that’s sure to widen in the rainforest, where one new species is discovered, on average, every two days.

“A possible extension for future work is to integrate a second API that lets people crowdsource the plant ID,” said Ross. “You create posts about a mysterious plant, and experienced naturalists can weigh in with what they think the species might be.”

Ross acknowledges that the manual upload is time- and resource-intensive, and presents yet another path for future students to explore. “The biggest hurdle in automating is getting the photos from the drone to the human, remotely. Right now there’s an SD card that must be removed. What happens when a drone crashes in that nearly unnavigable terrain and can’t be retrieved?” asked Ross.

Listening for Clues
The Duke network encompasses nearly as many people as the Amazon has leaves and branches, and two of them—Sam Kelly MEMS ‘18 and PhD candidate David Haas—have been happy to serve as informal advisors to the Duke students as they work through these kinds of challenges, particularly those related to sampling and processing audio information.

Right now, the sound team is working to effectively compress and format all the audio they do collect before writing the data to SD cards, where it can be retrieved and analyzed for the chirps, whistles and hoots that give researchers clues about the animals that shelter in the rainforest.

“It’s an ambitious project for people who have never done embedded programming before,” said Kelly. “The undergraduates designed the architecture to sample the audio the competition requires, at the correct frequency and memory. They really delivered. And what’s even cooler is, now we’ve got them hooked on embedded programming.”

Conservationists desperately need easy-to-use, inexpensive tools to monitor the state of the environment—which is exactly what the Rainforest XPRIZE teams are producing.

Conservationists desperately need easy-to-use, inexpensive tools to monitor the state of the environment—which is exactly what the Rainforest XPRIZE teams are producing, said Kelly, who works at technology company Conservation X Labs.

Though the XPRIZE focuses specifically on quickly cataloguing biodiversity, the Duke team might be able to deliver additional insight into events that are happening in real time if they can figure out how to process some of the data onboard the drone. This could provide a valuable fringe benefit to the ecosystem in question—picking up the sound of chainsaws, for example, or hearing the roar of a fire, might trigger an alert to local authorities. “And,” added Kelly, “the team will be able to reduce the exorbitant amount of ambient noise data that would be otherwise be collected.”

“It’s really hard to create a scientific tool that’s both easy to use and upholds the standards that science expects,” said Kelly. “If we can get this out there, there’s a huge need for it. I’m really excited to see where it goes.”

Brooke has been a client for several First-Year Design teams that are helping him get sound recorders and other longer-term recording devices like camera traps into the rainforest. Those design teams have developed delivery techniques that let the same drones that take the infrared and visual images also drop sound recorders onto branches in the canopy.  (Currently, researchers must climb hundreds of feet into the air to attach these devices.) The recently demonstrated drop-off of a camera trap device using a lightweight Parrot Anfi drone (by first year students Lucas Ramirez, Ian Morales, Zachary Kannam, and Ryan Wolfram)  could usher in a new age of long-term canopy research.