Joseph Izatt reflects on advancements and changes in the field of optical coherence tomography 25 years after its creation. 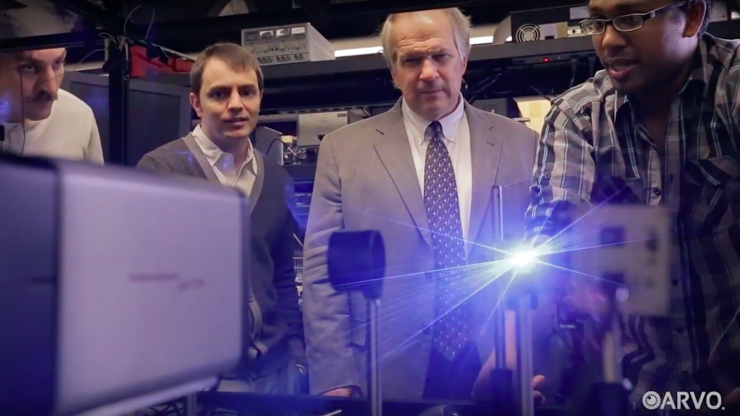 Joseph Izatt, the Michael J. Fitzpatrick Professor of Engineering at Duke University, recently served as the lead editor for a special issue of Biomedical Optics Express published April 1, 2017 in celebration of the 25th anniversary of the invention of optical coherence tomography (OCT). Izatt, who helped pioneer the technology as a postdoc at MIT, has focused much of his career on developing OCT, which is today a primary tool used for detecting and monitoring treatment of serious eye diseases in clinics worldwide.

With a joint appointment in BME and ophthalmology, Izatt is considered one of the leading experts in OCT, a medical imaging technique that allows researchers to peer beneath the surface of living tissues to diagnose and treat diseases. Although there are numerous uses of the technology, it is primarily used by eye doctors to detect and treat vision problems. To recognize how far work with OCT has developed, Biomedical Optics Express invited Izatt to organize the special issue of the journal, where he assembled a guest editorial board to curate articles and reviews about the various fields of OCT research.

“The anniversary was an opportunity to invite our scientific colleagues to reflect and write about the development of their subfields of OCT,” says Izatt. “We were pleased that so many authors were enthusiastic about contributing to the special issue.”

To celebrate the anniversary, the Association for Research in Vision and Ophthalmology (ARVO) also featured Izatt and his collaborator, Dr. Cynthia Toth, a professor in BME and Ophthalmology, in a series of videos about OCT. Together, the researchers discussed how Izatt and his team were creating handheld microscopes for imaging eye diseases in children, as well as operating room microscopes for live imaging during eye surgery, and showed how OCT is directly benefiting patients.

Although Izatt’s laboratory at Duke continues to develop new ways to advance and improve upon OCT, the anniversary has allowed him to reflect on his previous work with the imaging technique and coordinate with his early collaborators, including Professor James Fujimoto, Dr. David Huang and Eric Swanson, members of the MIT team that invented the technique.

“Before these events surrounding the 25th year anniversary, we hadn’t taken much time to discuss and reflect on those early days in OCT,” says Izatt. “The anniversary gave us a chance to come back together and reflect on the worldwide teamwork, collaboration and competition which allowed all of this to happen, and the significance for daily vision care  of the result.”

To learn more about the special issue of Biomedical Optics Express, visit: