For the past 17 years, neurosurgeons have implanted electrodes into the brains of persons with Parkinson’s disease to deliver a constant barrage of electric impulses. For many patients, the treatment known as Deep Brain Stimulation (DBS) immediately relieves the motor impairment caused by the disease.

Unfortunately, nobody really knows why. 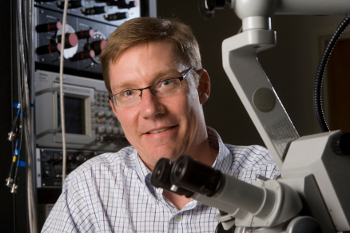 Warren Grill, professor of biomedical engineering and neurobiology at Duke University and member of the Duke Institute for Brain Sciences, is working to understand the mechanisms of DBS and use this understanding to develop innovative improvements to the therapy. And thanks to a prestigious new $4 million grant called the Javits Neuroscience Investigator Award, Grill will delve further into the mystery than ever before.

The Javits Award is a four-year grant that can be extended to seven years that is given by the National Institute of Neurological Disorders and Stroke (NINDS), which is an arm of the National Institutes of Health (NIH). The award is given to scientists for their “superior competence and outstanding productivity,” and it “provides long-term support to investigators with a history of exceptional talent, imagination, and preeminent scientific achievement.”

“The goal of our research is to do a better job at relieving the symptoms of Parkinson’s disease and essential tremor and to do so with less energy,” said Grill. “This will allow us to improve patient outcomes and to make smaller and longer lasting battery-powered implants.”

Previous research has shown that DBS is effective only at frequencies of more than 100 pulses per second, which quickly depletes the battery of the implanted stimulator. Grill’s work, however, has demonstrated that lower frequencies can be effective if an appropriately designed temporal pattern is used—analogous to a Morse code of electric pulses.

Grill and his colleagues will use the new award to understand the neural causes of these movement disorders and to determine why different temporal patterns of DBS work so well. Science’s current best guess is that neurons begin firing together in patterns of oscillations, which is disruptive to their normal behavior. Grill believes that using temporal patterns of DBS suppresses this abnormal oscillatory brain activity, thereby relieving symptoms.

For the next four years, Grill’s laboratory will combine computational modeling with recordings of brain activity during DBS to explore the relationship between temporal patterns of brain activity and the motor symptoms of Parkinson’s disease. They will also look for new DBS patterns that are better at treating patients and attempt to determine how they allow the brain to regain function.

“I am truly honored to receive the Javits award, as it recognizes not only our accomplishments, but the broader impact that neural engineering technology is having to advance neuroscience research and clinical care,” said Grill. “The long runway of support provided by the award will allow us to pursue higher risk, higher impact projects that we wouldn’t otherwise be able to do.”