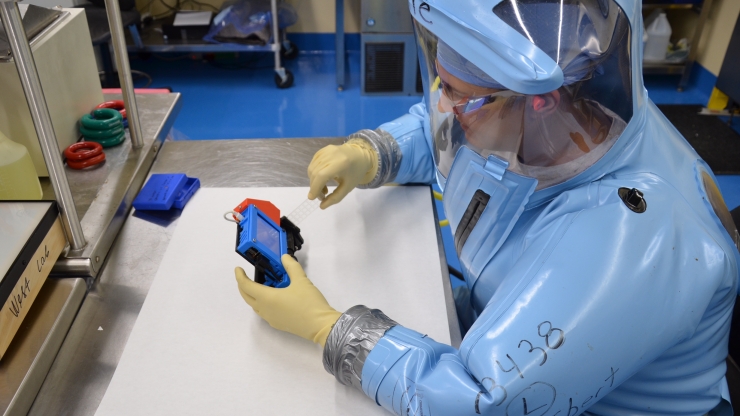 An interdisciplinary team of scientists at Duke University has developed a highly sensitive and rapid diagnostic test for Ebola virus (EBOV) infection. In monkeys infected with Ebola, this diagnostic, called the D4-assay, proved to be 1000 times more sensitive than the currently approved rapid diagnostic test and capable of detecting the virus a full day earlier than the gold standard polymerase chain reaction (PCR) test.

This work, which appears in Science Translational Medicine on April 7, was done by biomedical engineers, molecular biologists, and immunologists at Duke University, and the University of Texas Medical Branch in Galveston and the Galveston National Laboratory.

Ebola virus gained global notoriety in early 2014 after an outbreak began spreading across the populous capital cities in Guinea, Liberia and Sierra Leone in Western Africa. By the time the pandemic was officially declared ended in 2016, more than 28,000 people had been infected and more than 11,300 people had died of the virus.

As of March 2021, there are two ongoing Ebola outbreaks in the Democratic Republic of the Congo that have resulted in more than 2,200 deaths, and Guinea declared a new outbreak of Ebola virus disease (EVD) after a cluster of cases appeared in February.

Early treatment and contact tracing of Ebola virus disease is critical for two reasons: First, patients are highly contagious once they begin showing symptoms, and early diagnosis can help contain the spread of EVD by make contact tracing and patient isolation easier.  Second, the fatality rate of EVD can be as high as 90 percent if left untreated or treated late, but can be reduced to roughly 10 percent with monoclonal antibodies if patients are treated early in the infection.

The current gold standard for detecting Ebola virus is the reverse transcriptase polymerase chain reaction (RT-PCR) test, which identifies and amplifies viral RNA. Although RT-PCR has proven to be sensitive and capable of diagnosing Ebola infection much earlier than current alternatives, it has been difficult to implement in the remote settings where EVD outbreaks frequently originate.

Recent advances in RT-PCR test design have made it easier for untrained technicians to use the platform and reduced the need for expensive equipment. However, at $22.50 per test, the platform is expensive and, because it is lab-based, can be slow. In some studies, the median time required to confirm a diagnosis in the field is 6 days, making it a suboptimal tool when dealing with a highly contagious virus.

The current alternate diagnostic option is lateral flow assays, which detect antibodies or antigens that appear during an infection. These tests are cheaper, easy to use, and typically yield results in less than 30 minutes, but the trade-off is a greatly diminished sensitivity, so there is a greater possibility of the test missing an early infection.

To help address the shortcomings of both tests, the Duke team adapted the D4 assay, an ultrasensitive, point-of-care diagnostic previously developed by the Ashutosh Chilkoti lab, to quickly and accurately detect secreted glycoprotein (sGP), a biomarker produced by the Ebola virus during the early stages of infection.

Besides, Chilkoti, the Alan L. Kaganov Distinguished Professor of Biomedical Engineering, the team included Cassio Fontes, a former graduate student and now a senior research scientist in the Chilkoti lab, Michael Gunn, MD, a professor of medicine and immunology, and Barbara Lipes, an assistant professor of medicine at the Duke University School of Medicine.

“Prior studies suggested that Ebola virus produces secreted glycoprotein at high levels early in infection to act as a decoy and distract the immune system while the virus replicates and binds to the host cells,” Fontes said. “We thought that if we could detect that, we could help facilitate earlier diagnosis, containment, and treatment during Ebola outbreak.”

However, antibodies against sGP were not available, so Lipes, an antibody engineering expert in the Gunn lab, created a large library of antibodies that bind to sGP and screened for the antibodies that bound most strongly.

The two labs then worked together to identify the capture-detection antibody pair that provided the greatest sensitivity on the D4 platform. 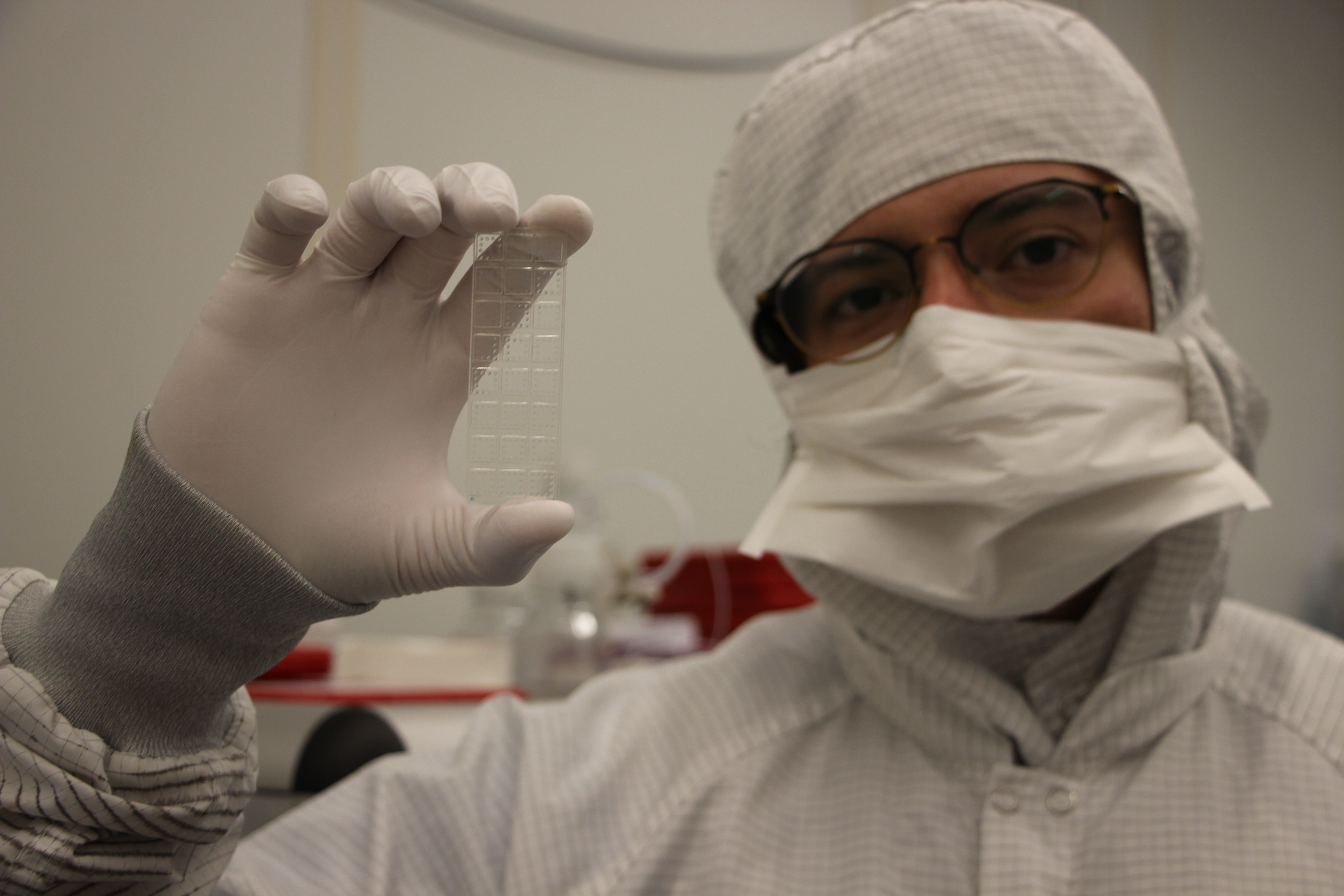 The D4 assay for Ebola is made by inkjet printing these two antibodies against secreted glycoprotein onto a glass slide: detection antibodies, which are tagged with a fluorescent marker, and capture antibodies, which are primed to bind the target antigen. When a drop of blood or a throat or nose swab is placed on the slide, the detection antibodies separate from the array and bind to the target in the sample. These antibody-biomarker complexes then attach to the capture antibodies on the slide, which glow to indicate a capture.

To further improve sensitivity, the D4 assay is printed on a stealth polymer brush coating developed by the Chilkoti lab, which prevents non-target proteins from attaching to the slide’s surface. This removes any ‘background noise’ on the chip, making it easier to detect very low levels of the target proteins, which makes the D4 assay very sensitive.

In parallel, the Chilkoti lab also developed a cheap but highly sensitive hand-held detector — the D4Scope — to read the results of the D4 assay.

“Jason Liu, a graduate student in my lab, worked to develop the D4Scope, which is a low-cost, battery-powered, compact, wide-field fluorescence reader that can image microarray spots with high sensitivity,” Chilkoti said. “It was specifically designed using off-the-shelf components, so that parts could easily be replaced if the reader was damaged in the field.”

To test their platform, the team worked with collaborators at the University of Texas Medical Branch in Galveston, where they showed that the D4 assay could detect EBOV in non-human primates a full day earlier than the RT-PCR.

“We’ve put the lateral flow assay to shame, sensitivity wise,” said Fontes. “This is exciting because by understanding the biology of this virus, we’ve shown that there may be a target to look for where immunoassays like the D4 can outperform the PCR. It’s really breaking new ground.”

As the team moves forward, they aim to continue to refine their platform with the goal of shortening the time to results from 60 minutes to 30 minutes. Experiments are underway using molecular evolution to increase the sensitivity of the capture and detection antibodies.

They are also improving the design of the platform to make it a fully self-contained test. This would mean that users would only need to add a drop of blood to one port of a flow cell and a buffer solution to a second port to run the test under gravity flow. These changes would also allow for improved biocontainment and biosafety when handling potentially dangerous fluids.

Once these changes are made, the team hopes to coordinate clinical experiments in the field.

“When controlling an outbreak, it’s key to identify the infected and be able to trace their contacts very quickly, and our hope is that test would allow you to do that,” Gunn said. “With such a simple and rapid assay, you can also quickly screen people who are at risk of having contracted Ebola. It seems simple, but in the grand scheme of things could represent the difference between an outbreak and a pandemic.”

This research was funded by the National Institutes of Health (NIH, R01AI150888; U19AI142785; UC7AI094660), the US Special Operations Command (w81XWH- 16C-0219), the National Council for the Improvement of Higher Education and the Science Without Borders project. Partial support was provided by the Department of Health and Human Services. The team also received the support of the Biosafety Level 4 (BSL-4) lab at the Galveston National Laboratory.

Competing Interests: The underlying technology of the D4 was developed by Angus Hucknall and Ashutosh Chilkoti, and was acquired by Immucor Inc (Norcross, GA) in 2014. The other authors declare no competing financial interests.