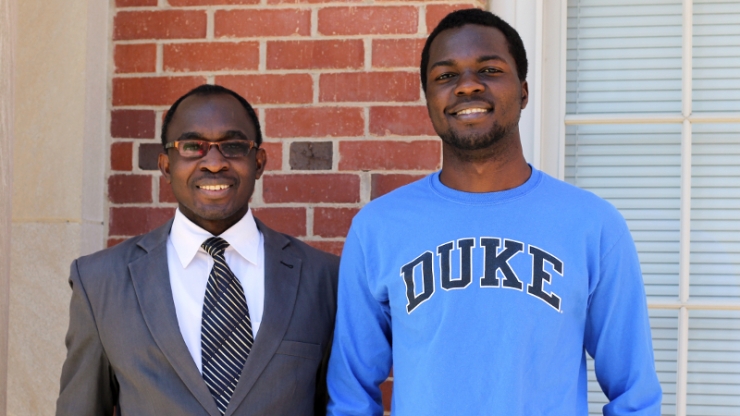 It was with a lot of excitement, and some trepidation, that Kenneth Rubango and Henry Kiwumulo arrived at the Pratt School of Engineering in the fall of 2016 to begin work towards their master’s degrees as the first Duke-Makerere Scholars.

Supported by full scholarships, the two came to Duke from Makerere University in Kampala (MUK), Uganda, as part of the Duke-Makerere Biomedical Engineering (BME) Partnership. Established in 2014 by Professor William “Monty” Reichert, PhD, the program aims to give biomedical engineers and global health practitioners tools to design and implement healthcare technologies in low-resource settings.

For Rubango and Kiwumulo, Durham was a foreign land. Communication was a challenge. Nuances in spoken English were baffling, as was the accent. People’s lifestyles and Duke’s teaching style were not what they were used to growing up in Uganda.

That trepidation, however, has given way to a successful year and charted a path that their peers will follow for years to come.

Both graduate students came here with different challenges, but their purpose was strikingly similar. They recognized an urgent need to improve healthcare in their African homeland, and were willing to invest in sweat equity to acquire the knowledge and skills to do so through Duke’s BME program. 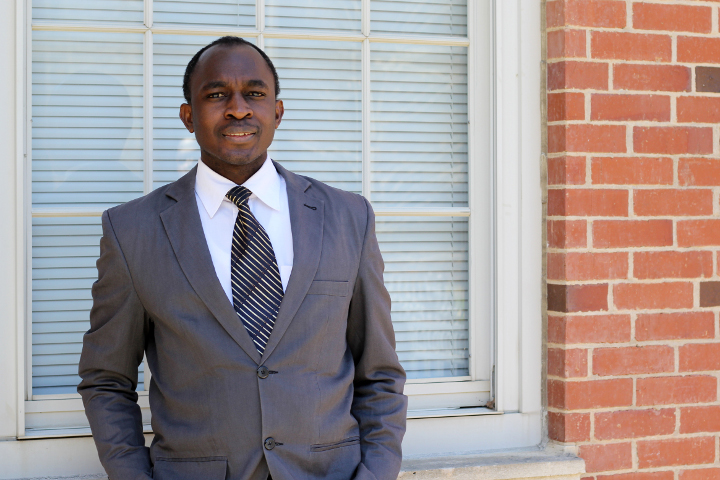 Kiwumulo’s path to BME wasn’t straightforward. In around 2003, he contracted pneumonia that almost claimed his life due to poor diagnostic devices. The hospital’s X-ray machine malfunctioned and at that time there was no expert to repair the machine. This painful scenario ignited this 21-year-old’s interest in healthcare and made him focus his energies on improving the design of imaging machines.

For someone who always disliked hospitals as a child, Kiwumulo found himself constantly thinking of how to make healthcare technology in Uganda more robust. After completing his undergraduate degree in 2006, he joined Philips Medical Systems, and for eight years gained expertise in maintaining imaging machines.

In 2014, Kiwumulo joined the BME program at MUK as an instructor. “It’s through MUK that I met Dr. Reichert who really felt sympathetic with all my efforts and decided that given further professional BME training, I would make my dream more successful. That’s how I got finally to this great Duke University for my MSc in BME,” he informs.

Coming to Duke involved personal sacrifice for Kiwumulo. “The biggest obstacle was the challenge of leaving my family. I am a married man and have two young daughters. So, it was beyond the imagination to leave them for a full year. How would I cope?” He resolved to make his effort count. “I think I am a focused man,” Kiwumulo asserts, emphasizing his goal to train engineering students in imaging systems.

Rubango, on the other hand, plans to paint on a wider canvas and have “a high social impact through medicine.” While his immediate goal is to return to MUK and teach what he learned at Duke, his long-term aspiration “is to set up a venture capital firm in Uganda that would provide a platform for translation to market of high social impact innovations in the academic and non-academic arena.”

Straight out of high school, Rubango researched BME and realized how this field would allow him to innovate and solve problems through technology. Fortuitously, MUK offered its first four-year undergraduate course in BME. “I was in the first class of BME at MUK in 2011,” he says proudly.

As fate would have it, in 2014, Duke’s Professor Reichert decided to take a sabbatical year in Uganda and arrived at MUK as a Fulbright Scholar. He taught six classes in two semesters and helped streamline the curriculum of the nascent BME program. “Kenneth took several classes from me at Makerere and I was always impressed with his smarts and work ethic,” says Reichert. 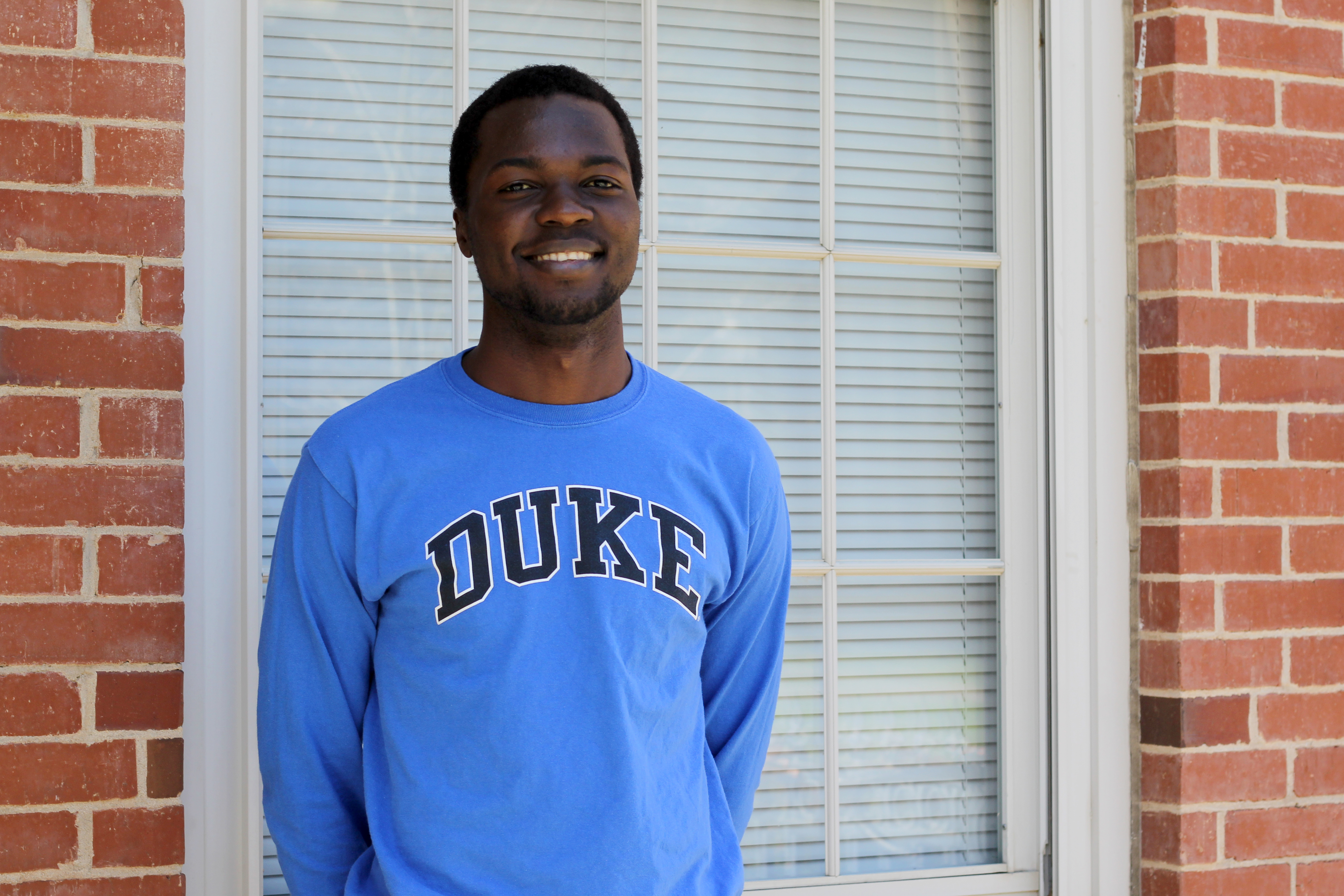 After a lot of groundwork, including organizing funding and constant consults with colleagues at Duke and MUK, Reichert and Ashutosh Chilkoti, professor and chair of BME, launched the Duke-Makerere BME Partnership, a collaborative program to enrich students’ experiences on both campuses across two continents. Rubango and Kiwumulo were handpicked to pursue their master’s degree at Duke on full scholarships under the tutelage of BME professors Roger Nightingale and Kathy Nightingale.

This was a godsend for Rubango. “At the time when I applied, I couldn’t even afford to pay the fee for the GRE exam,” he says. Besides, studying for the exam with no personal laptop was daunting. Even the Internet connection was very expensive, he adds.

Always enterprising, Rubango had the will, and soon found a way. “I borrowed a laptop and a dongle from friends. After studying for the GRE for three months, I gave them back,” he says. Duke, meanwhile, took care of all fees and made the transition as painless as possible.

At Duke, however, it’s not all work and no play for these scholars. Along with intense brainstorming of collaborative ideas with peers, they are also experiencing a total immersion in the Duke culture. Rubango plays for the Duke rugby team and is often seen cheering the Blue Devils at Cameron. Kiwumulo is deeply religious and enjoys church-related activities.

After their degrees, both scholars look forward to fulfilling their teaching obligation at MUK. “Kenneth is very much the entrepreneur so he may move onto other things. Henry, I think, will shoot for a faculty position at Makerere.” says Reichert.

Armed with Duke credentials and an excitement for the future, the world is their oyster.