With the elections of Grill, Gersbach and Becker, Duke Engineering is home to 13 NAI Fellows 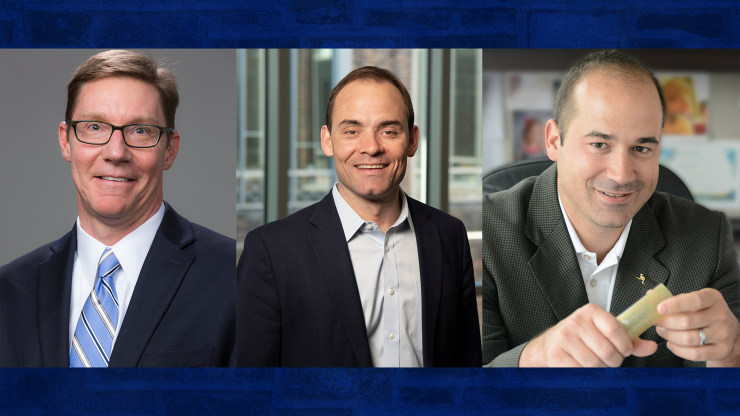 Founded in 2010, the NAI recognizes academic inventors for their prolific spirit of innovation in creating or facilitating outstanding inventions that have made a tangible impact on the quality of life, economic development and the welfare of society. Today’s announcement brings the number of NAI Fellows in the Pratt School of Engineering to 13. Professor Tony Jun Huang was elected in 2020; Kathryn Nightingale and Blake Wilson were elected in 2019; Nimmi Ramanujam, Joseph Izatt and Tuan Vo-Dinh were elected in 2017; David Smith and Jennifer West were elected in 2016; and Robert Calderbank and Ashutosh Chilkoti were elected in 2014.

Becker is an expert in organic polymer chemistry whose multidisciplinary research team works at the interface of chemistry, materials and medicine to develop bioactive polymers to improve human health. A professor with joint primary appointments in the Departments of Chemistry and Mechanical Engineering & Materials Science with collaborators in the Departments of Biomedical Engineering and Orthopaedic Surgery, he both conducts basic science research and develops functional biomaterials for translation into clinical applications.

One of his many projects includes a biocompatible implantable polymer surgical patch that releases a controlled dose of non-opioid painkillers directly to the site of a surgical wound and then dissolves slowly. The goal is to provide localized pain control in the days immediately following surgery, such as for a hernia or cesarean birth, effective enough to eliminate the need for opioid pain relievers and their associated systemic side effects or risk of addiction. Becker also is developing 3D-printable polymers for clinical applications, such as implantable mesh used in hernia surgeries.

Gersbach’s research centers on gene therapy, genomics, and biomolecular and cellular engineering. A widely recognized expert in genome engineering, Gersbach has appeared on Clarivate’s “Highly Cited Researchers” list since 2021, and Nobel Prize winner Jennifer Doudna noted his work in an interview about exciting research in the field.

As the director of Duke’s Center for Advanced Genomic Technologies, Gersbach and his team received an $8 million NIH grant to explore what genes increase the risk of developing schizophrenia. In 2016, Gersbach published one of the first successful uses of CRISPR to treat an animal model of genetic disease. He advanced this work in 2019, where he showed that genetic edits and protein restoration in mouse models of Duchenne muscular dystrophy remain viable one year after a single CRISPR treatment.

Recently, Grill developed a method for using light-based deep brain stimulation to better understand exactly how the therapy works, and he showed that stimulating the vagus nerve can reduce inflammation and restore cognitive function after injury or surgery in older adults. His team has also investigated how certain types of nerve stimulation can restore bladder function. This research was nationally recognized via the NIH SPARC program, which awarded Grill and his team with the highly competitive Neuromod Prize.

The new Fellows will be inducted on June 27, 2023, during the NAI 12th Annual Meeting in Washington, D.C.