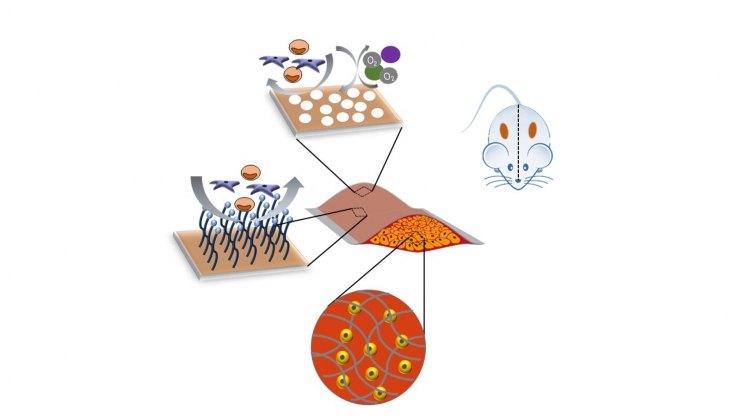 The demonstration offers a potential path toward treating human diseases such as hemophilia and type 1 diabetes with immunologically incompatible cells — from either humans or animals — without needing to suppress the patient’s immune system.

“There’s a growing body of work investigating the potential of transplanting cells to treat a litany of human diseases,” said Shyni Varghese, professor of biomedical engineering at Duke University. “But there will always be a mismatch between the number of cells needed and what is available, so we decided to push the boundaries a bit to see if we can do cross-species implantation.”

“Showing that this device can support cross-species cells makes it much more likely that it will work in any same-species scenario. But there’s always going to be a shortage of human cells available for these kinds of therapies, so one could envision, for example, using pig cells to treat human diabetes as well.”

The idea behind cell transplantation therapy is to transplant an “island” of healthy cells that can provide functions of the compromised organ. The transplanted cells can act as a sort of drug store to deliver key biomolecules, such as insulin to treat type 1 diabetes or factor VII or factor IX to treat bleeding disorders. Such cell transplantation can also bridge the gap until an organ transplant is possible.

Varghese and her lab group are pursuing the idea of using a biomedical device to create a barrier between the cells and the host’s immune system that is porous enough to allow the cells within the device to take in nutrients and oxygen and to send out therapeutic biomolecules. However, it is a delicate balancing act that can easily collapse.

“Most of the time when you try to hide the cells from the immune system, they don’t get enough food or oxygen and just die,” said Varghese, who also holds appointments in mechanical engineering and materials science and orthopedics. “Getting a device’s wall just right in terms of thickness, permeability and interactions with the host tissue is an engineering problem, and it’s one that we wanted to see if we could solve.” 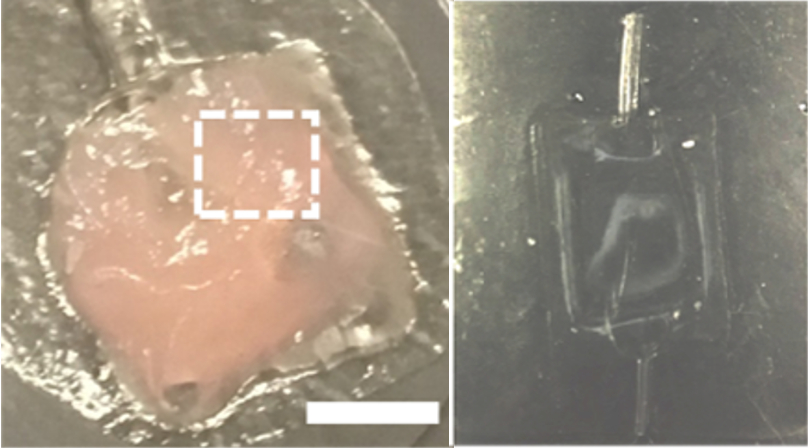 In the study, Varghese and a research team of graduate students and postdoctoral researchers engineered their device out of chitosan — a sugar derived from the exoskeleton of shellfish. Chitosan is a biocompatible material that has been used extensively in biomedical applications. It’s also sticky, which allows the researchers to form two layers and stick them together to form a pouch. It can be easily molded into different shapes with walls of various thickness.

But chitosan is not enough to do the job on its own. One of the challenges similar devices have been unable to overcome is the barrage of sticky proteins that the immune system throws at these types of foreign objects. Over time, these cells form a fibrous tissue that envelops the device, thwarting the transmission of nutrients and therapeutic biomolecules.

To get around this defense, the Varghese lab added another layer to the outside of the device consisting of flexible bristles made out of dodecanedioic acid (DDA) molecules. Commonly used in applications such as corrosion inhibitors, surfactants and engineering plastics like nylon, these DDA “brushes” form a protective layer around the pouch, protecting it from fibrous tissue buildup.

“This creates a buffer zone between the pouch and the body that’s still thin enough for the molecules we need to get in and out,” Varghese said.

The researchers used this approach to create a cell-protecting pouch about half the size of a packet of sweetener commonly found at the local coffee shop that is capable of holding millions of cells. They filled the pouches with human liver cells and implanted them in mice with fully functional immune systems.

By tracking the amount of human albumin — a protein secreted by liver cells — in the mice’s blood, the researchers found that the pouches held up for at least six months. They believe the pouches might have lasted for more time, but the amount of albumin was declining enough at six months that they did not want to risk the study.

Moving forward, Varghese wants to test the device in larger animals to see how well it fares. She also plans to optimize the device to improve it further and test to see if it could be used to treat type 1 diabetes.

“Showing that this device can support cross-species cells makes it much more likely that it will work in any same-species scenario,” Varghese said. “But there’s always going to be a shortage of human cells available for these kinds of therapies, so one could envision, for example, using pig cells to treat human diabetes as well.”