How did you get interested in teaching computer programming?

I came to Georgia Tech for my undergraduate degree in computer science as one of those kids who taught himself programming since the second grade. When I came to college, the intro programming courses were really easy, but at the time I didn't realize that they implicitly assumed you knew a lot already.  For me, they were great in that they polished away many bad habits I had picked up without formal instruction. I was a TA for the introductory programming courses, for many years, but at the time I didn’t really understand the bigger picture educationally that these classes were set up for people who already know how to program, so I was a bit mystified by the struggles of many of the students. Then, when I was doing freelance tutoring as a master’s student, I had this realization that most courses weren’t actually teaching how to program, they were only teaching the syntax. 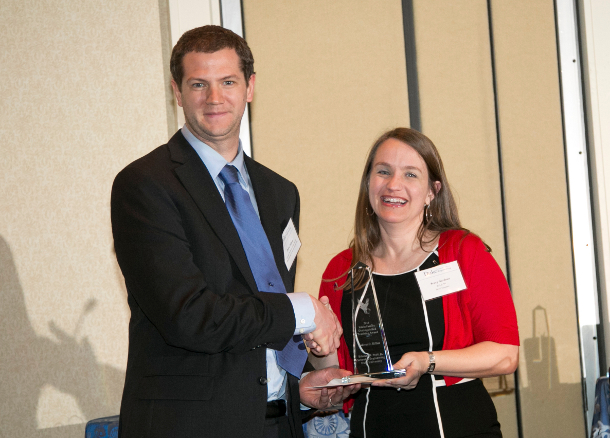 So what’s the difference between teaching programming and teaching syntax?

The analogy I like to make is if you’re learning to play chess, I can show you how all the pieces move, but that doesn’t tell you what you’re supposed to do in a certain situation or how you’re supposed to think of a big strategy.  Knowing the legal moves—the “syntax” of chess—is important to being able to play, but learning what’s legal isn’t the hard part, nor is it what distinguishes an intermediate player from a world champion.

A lot of programming courses don’t really teach how to program. They show the syntax and so forth and then just sort of expect students to make this giant leap from memorizing “if-then” statements and “for loops” to understanding how to put them all together. So we look at explicitly how to do that.

And I think it’s completely crazy to say you’re going to teach somebody to write if they don’t know how to read. So one thing that we cover that I think is really important, is that any piece of code that you write, you should be able to say precisely what it does, no matter what’s going on or where you are along the process.

So your big secret is to teach students how to think about programming rather than just the different moves they can make?

Exactly. When I was tutoring, I sat down and asked myself, “How do you tell someone step-by-step how to write a program?” And that has evolved over the years into the programming approach that I teach in this new e-book that I’ve published along with Anne Bracy at Cornell University as well as in a Coursera specialization course that I’ve developed with my colleagues in the computer science department.

There are seven steps, and the first four are completely independent of the programming language that you’re learning. You start out working by hand and writing down step-by-step what you’re doing. First you try to generalize from a specific problem to the category of problems you’re trying to solve and then you check your work, again by hand. Only now that you have this nice solid plan do you go and turn that plan into code. And then you test and debug your code.

And that’s what’s in the Coursera specialization you’re developing along with your CS colleagues?

Yes. The Coursera course is focused on beginners and is a very gentle introduction to programming. You learn a few programming concepts, get introduced to the basics of Java, and write some simple programs. It’s for people who are just beginning to discover programming, so we try to expose them to the fun and excitement of computing and how it can solve a lot of different problems. The entire specialization is four four-week courses followed by a capstone project. But even then, you only get through about one-third of the new e-book, which I teach in a single semester here at Duke.

It definitely is intense. The course I teach with the new e-book is ECE 551. It’s for master’s students who have decided they want to be computer engineers but have little or no actual experience in programming. As master’s students, we assume they know how to excel in school, have taken hardcore engineering classes and know how to manage their time. They have an undergraduate degree but have decided that they like computer engineering enough that they want to spend two years changing fields. We don’t have to sell them that computing is exciting; they want to be programmers.

As such, we’re working very much on developing very serious programming skills very quickly. Undergraduate students have four years to worry about learning to deal with corner cases, error conditions, and writing codes that are resilient and robust. I have to teach all of that in a semester.

Even though it sounds like an extremely difficult course, the students nominated you for the Klein Family Teaching Award – which you won – for the course last year. How did that happen?

The students really like this class for a variety of reasons. For one, it’s very applicable to them. It’s exactly what they need. Even though a lot of students see this table of contents and the sheer size of the book, and they say, “Okay, wait, you teach this whole thing in a semester?” We move really quickly, but that’s what it takes if these students want to be professional programmers working at top US tech companies like Google, Facebook, IBM or Microsoft in two years.

I also think the students nominated me because I’ve never said no to a student wanting help. For example, way back I taught ECE 250, which is one of the undergraduate classes. After the first midterm I offered to help anyone who was not happy with their grade by setting up a weekly half-hour meeting with me. Generally, the students who got Ds and Fs on the midterm took me up, but I actually got one student who got something like a B-, who came and said, “I know you’re probably talking more to the people who got Ds, but this isn’t what I want.” But no matter what, if you want to put in the work of coming to see me for half-an-hour and getting your questions answered, then we’ll do it.