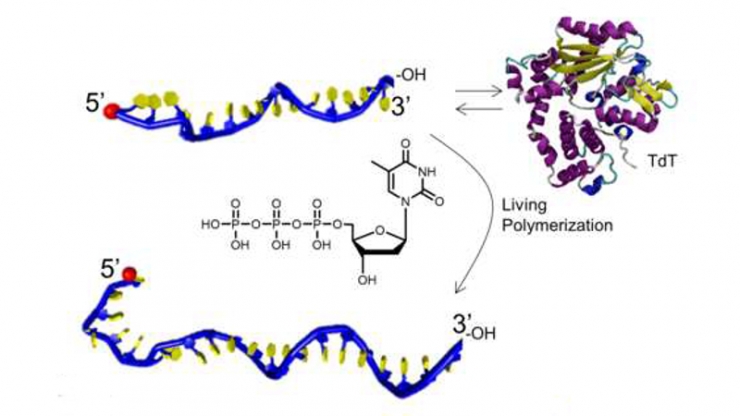 Materials scientists have written the recipe on how to use an oddball enzyme to build new biomaterials out of DNA. The work provides instructions for researchers the world over to build self-assembling molecules for applications ranging from drug delivery to nanowires.

There are, however, a few black sheep in the world of molecular biology that do not require a template. One such outlier, called terminal deoxynucleotidyl transferase (TdT), works in the immune system and catalyzes the template-free addition of nucleotides—the building blocks of DNA—to a single-stranded DNA.

Seemingly random nucleotide sequences in a single DNA strand wouldn’t seem to have much of a biological use—but materials scientists have figured out what to do with it.

In a new paper, Duke University researchers build on their previous work and now describe in detail how the TdT enzyme can produce precise, high molecular weight, synthetic biomolecular structures much more easily than current methods. Researchers can tailor synthesis to create single-stranded DNA that self-assemble into ball-like containers for drug delivery or to incorporate unnatural nucleotides to provide access to a wide range of medically useful abilities.

The results appear online on May 15, 2017 in the journal Angewandte Chemie International Edition.

“We’re the first to show how TdT can build highly controlled single strands of DNA that can self-assemble into larger structures,” said Stefan Zauscher, the Sternberg Family Professor of Mechanical Engineering and Materials Science at Duke University. “Similar materials can already be made, but the process is long and complicated, requiring multiple reactions. We can do it in a fraction of the time in a single pot.”

TdT has advantage over typical, synthetic chain-building reactions in that it continues to add nucleotides to the end of the growing chain as long as they are available. This opens a vast design space to materials scientists.

Because the enzymes all work at the same pace and never stop, the resulting strands of DNA are all very close in size to each other—an important trait for controlling their mechanical properties. The never-ending process also means that researchers can force-feed TdT any nucleotide they want—even unnatural ones—simply by providing no other options.

“Your body makes strands of DNA out of only four nucleotides—adenine, guanine, cytosine and uracil,” said Ashutosh Chilkoti, the Alan L. Kaganov Professor and chair of the department of biomedical engineering at Duke. “But we can create synthetic nucleotides and force the enzyme to incorporate them. This opens many doors in making DNA-based polymers for different applications.”

For example, unnatural nucleotides can incorporate molecules designed to facilitate “click chemistry”—enabling the attachment of a whole suite of biomolecules. Researchers can also start the building process with a foundation made of a specific DNA sequence, called an aptamer, which can target specific proteins and cells.

“This enzyme has been around for decades, but this is the first time somebody has mapped these concepts into a blueprint for synthesizing a whole new family of polynucleotides,” said Zauscher. “In the past, biochemists have largely been interested in what TdT does in the human immunological system and how it does it. We don’t care about all of that, we’re just interested in what material building blocks we can make with it. And the precision with which we can make polymers with this enzyme is actually quite exceptional.”