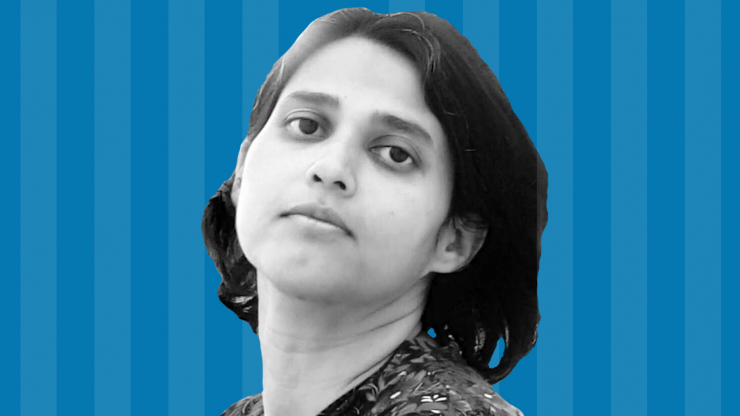 Tania Roy will join the faculty of the Department of Electrical and Computer Engineering (ECE) in Duke University’s Pratt School of Engineering beginning January 1, 2023. With a research portfolio branching into both brain-inspired computer architectures for machine learning algorithms and high-energy electronics for space applications, Roy is set to complement and enhance many of the department’s existing strengths.

Roy joins Duke ECE from the University of Central Florida, where she has been an assistant professor with joint appointments in materials science and engineering and the NanoScience Technology Center for six years. She earned her undergraduate degree in electrical and electronics engineering from the Birla Institute of Technology and Science, Pilani, India and her PhD in electrical engineering from Vanderbilt University before completing postdoctoral stints at Georgia Tech and UC Berkeley.

Roy’s primary focus for the past six years has been applying emerging “neuromorphic” computer hardware technologies to machine learning applications. As the name suggests, this approach is working to create electronic devices that mimic the behavior of the human brain. Rather than being constructed only from traditional circuitry such as resistors and transistors, the hardware also contains building blocks such as “memristors,” which are resistances that also feature an element of memory.

“The brain isn’t great at calculating large numbers like a computer, but it’s very good at pattern recognition. While we don’t fully understand how the brain works, we can model the basic structure of neurons and synapses to make them better at pattern recognition. For example, the more times a memristor sees the same input, the stronger its response, while inputs that don’t repeat become forgotten.”

Duke already has a strong program in neuromorphic computing, including the laboratories of Helen Li, the Clare Boothe Luce Professor of Electrical and Computer Engineering with a joint appointment in computer science, and Yiran Chen, also a professor of both ECE and computer science. But while their focus has largely been on the circuit and architectural levels, Roy says, hers is seeking to address the challenges from the basic device level to develop novel hardware. A machine learning algorithm running on this type of hardware could, for example, make complex programs like voice recognition available on much smaller devices that don’t connect to the internet.

“The brain isn’t great at calculating large numbers like a computer, but it’s very good at pattern recognition,” Roy said. “While we don’t fully understand how the brain works, we can model the basic structure of neurons and synapses to make them better at pattern recognition. For example, the more times a memristor sees the same input, the stronger its response, while inputs that don’t repeat become forgotten.”

The second arm of Roy’s research deals with gallium nitride, a material she wrote her dissertation on and recently returned her focus toward. Gallium nitride is a semiconductor that is poised to replace silicon in certain areas of computer hardware. Because of its physical characteristics, the material is well suited for high-energy and high-radiation applications, such as those found outside of the Earth’s atmosphere.

Roy is part of a Multidisciplinary University Research Initiative (MURI) project led by Pennsylvania State University to investigate just how well suited the material is for extreme environments and how it might be improved. Roy’s role in the project specifically deals with how resistant gallium nitride is to the damaging effects of the various forms of harsh radiation found in space.

“This work has important implications for devices here on Earth as well,” Roy said. “Solar flares can create ion storms that bombard and damage electronics. Silicon Valley giants like Intel have radiation effects groups of their own, so it’s an active field of research.”

At Duke, Roy says her work with gallium nitride fits well with the research of April Brown, professor of electrical and computer engineering. Thanks to the state-of-the-art facilities found in the Duke Shared Materials Instrumentation Facility, Roy can work with Brown and others to develop these alternative technologies and put their radiation resilience and other properties to the test.

Outside of the laboratory, Roy says she loves teaching just as much as she loves research. Back at UCF, she regularly hosted K-12 students for a hands-on laboratory experience during the summer—at least before the pandemic hit. Besides picking this pet project back up, she also says she looks forward to teaching more undergraduate electrical engineering courses than her split appointment at UCF previously allowed.

“Electrical engineering is where I’ve spent the most time doing my own research, and I feel like teaching becomes much more efficient if you have personal hands-on experience with the topic being taught,” Roy said. “I’m looking forward to teaching at Duke. I hear the students are amazing, and I think my research will get stronger because of their input.”

“Ever since I came to the United States in 2006, I’ve always thought of Duke as the Harvard of the South,” Roy added. “Besides always having that attraction in mind, I’m looking forward to the opportunities the area will provide my two children. It seems like a wonderful place to live and raise a family.”