Last year was a particularly bad year for my garden. Deer stripped the apples from the trees, the blueberries from the bushes and the blackberries from the canes. Birds pecked holes in the tomatoes. Even the tulip bulbs were dug up and snacked upon by ravenous rabbits.

Duke University professors of electrical and computer engineering Nan Jokerst and Martin Brooke have had similar problems at their farm. They have tried trapping and relocating the raccoons and other pests that were destroying their crops, said Brooke, but they had little success.

This spring, they tried a different approach: challenging their senior-level design class at Duke's Pratt School of Engineering to solve their garden problems.

Final projects included a motion-activated box that screamed like it was being murdered when anything with a heat signature came near it and a contraption that squirted lavender-scented water at feathered and furred intruders.

The Duke class, ECE 449: Sensors and Sensor Interfaces, is the capstone class meant to synthesize everything students have learned as they’ve worked toward earning their undergraduate degree. Several sections of the capstone are offered every year, and each has a different focus, so students can choose a topic of interest to them.

This spring, if they chose the section taught by Jokerst and Brooke, the students could pick whether they wanted to design a sensor system to actively detect and deter garden pests or one that could protect vulnerable new seedlings from harsh environmental conditions. 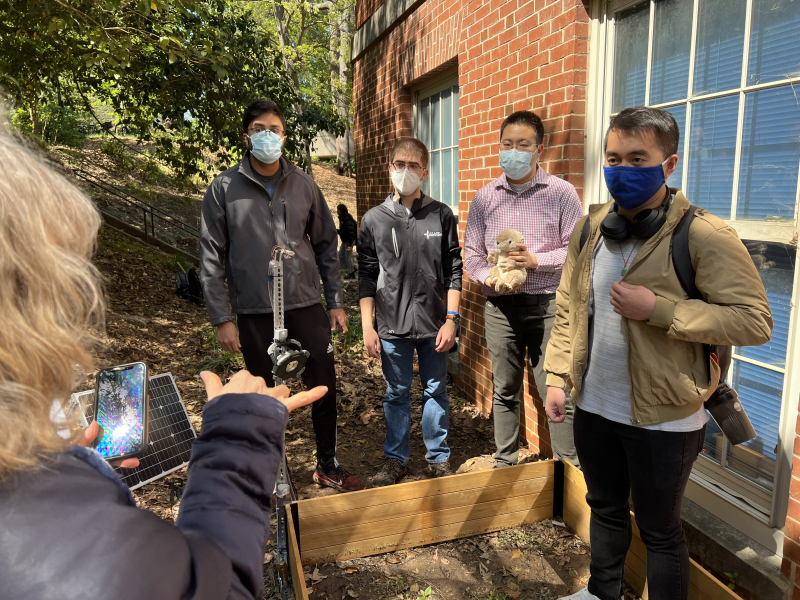 From there, Brooke and Jokerst sorted the 39 students into seven small teams, each of which took a wildly different approach to their challenge. The final projects included a motion-activated box that screamed like it was being murdered when anything with a heat signature came near it and a contraption that squirted lavender-scented water at feathered and furred intruders. There was also a wooden frame with a shade cloth that mechanically unrolled across the top to protect seedlings if the day became too sunny. It also folded down into a tidy package with a carrying strap, which earned its team members bonus points. 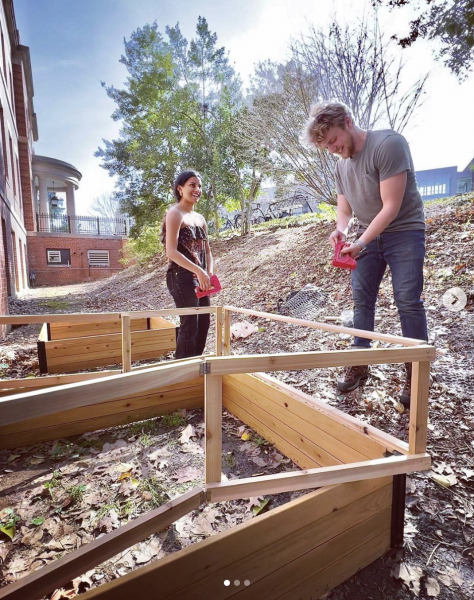 That system was designed by Malvika Jain, Rachel Luria, Oscar McMullen, Luke Turkovich and Livia Seibert. The team was nervous about its final demonstration and had specific concerns about their system’s solar power source. (“Our battery is losing voltage at this very minute,” one team member muttered to another as they waited for their turn to present on Demo Day, the last day of class.) Integrating all the components had been very tough, they admitted, and they figured it all out only through what McMullen called “aggressive noodling.” 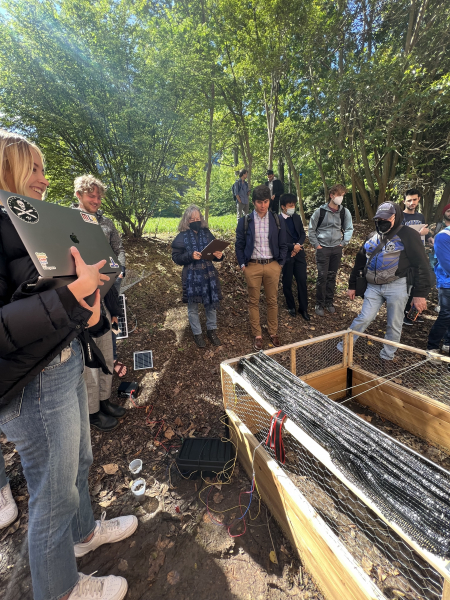 “The systems are only solar powered, with a battery so they can run at night, so the teams have to come up with a power budget. They have to figure out the levels of power and current that each component requires and then make all the components work together,” said Jokerst. “It might seem simple, but it’s actually very difficult.”

And it was only one aspect of many that the students were graded on. Brooke and Jokerst don’t live on their farm, so the ability to check in on conditions there without stepping foot on the property is key. Each team, therefore, also had to demonstrate that its system could be controlled remotely from a computer or cell phone and that it could collect and report the information to the user daily. Basic structural elements like portability, weatherproofing and ease of use also had to be considered.

The teams took opportunities to learn from each other during their weekly classroom presentations. If one team had success with a tricky task—like stepping voltage up or down—students on other teams were allowed to ask, explicitly, how they had achieved it. (Jokerst calls this practice “industrial spying,” and said it’s encouraged.)

“There’s a significant difference in the students who have taken First-Year Design. There’s no ‘random walk.’ They have learned that design is a process, so their approach is systematic.”

In the end, all the teams’ systems seemed—to some degree—to work. Jokerst gave some of the credit for the class’s high success rate to the fact that this year’s seniors were the first cohort to have started their engineering education with Duke Engineering’s signature First-Year Design curriculum. “There’s a significant difference in the students who have taken First-Year Design,” said Jokerst. “There’s no ‘random walk.’ They have learned that design is a process, so their approach is systematic.”

“They also start to build much more quickly because they understand the value of prototyping,” added Brooke.

The team I spoke with agreed that following familiar processes helped, even in a less regimented environment. They also honed some soft skills; effective time management and scheduling was critical to getting the complex project done, they said.

They will surely lean on these skills in the coming years as they launch their careers. Of the graduating seniors on this team, two are headed to Seattle to work for Microsoft and Google and another is taking a job in Austin with semiconductor manufacturer AMD.

As each team wrapped up its final presentation, they faced the last, most important question from Jokerst.

“Did you have fun?” she asked.

Solutions for Seedling Sunburn, Runaway Trash Bins and Other Woes

What Happens When a Dolphin Holds Its Breath?