Strong, lab-grown muscle is the first to heal itself after animal implantation

Biomedical engineers have grown living skeletal muscle that looks a lot like the real thing. It contracts powerfully and rapidly, integrates into mice quickly, and for the first time, demonstrates the ability to heal itself both inside the laboratory and inside an animal.

The study conducted at Duke University tested the bioengineered muscle by literally watching it through a window on the back of living mouse. The novel technique allowed for real-time monitoring of the muscle’s integration and maturation inside a living, walking animal. 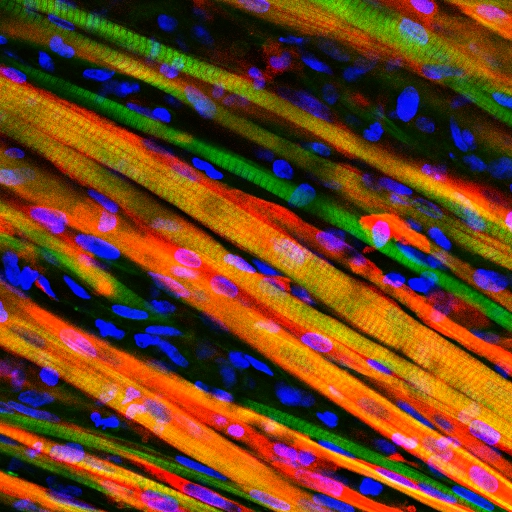 Both the lab-grown muscle and experimental techniques are important steps toward growing viable muscle for studying diseases and treating injuries, said Nenad Bursac, associate professor of biomedical engineering at Duke.

The results appear the week of March 31 in the Proceedings of the National Academy of Sciences Early Edition.

“The muscle we have made represents an important advance for the field,” Bursac said. “It’s the first time engineered muscle has been created that contracts as strongly as native neonatal skeletal muscle.”

Every muscle has satellite cells on reserve, ready to activate upon injury and begin the regeneration process. The key to the team’s achievement was successfully creating the microenvironments—called niches—where these stem cells await their call to duty.

To put their muscle to the test, the engineers ran it through a gauntlet of trials in the laboratory. By stimulating it with electric pulses, they measured its contractile strength, showing that it was more than 10 times stronger than any previous engineered muscles. They damaged it with a toxin found in snake venom to prove that the satellite cells could activate, multiply and heal the injured muscle fibers.

Then they moved it out of a dish and into a mouse.

With the help of Greg Palmer, an assistant professor of radiation oncology in the Duke University School of Medicine, the team inserted their lab-grown muscle into a small chamber placed on the backs of live mice. The chamber was then covered by a glass panel. Every two days for two weeks, Juhas imaged the implanted muscles through the window to check on their progress.

By genetically modifying the muscle fibers to fluoresce during calcium spikes—which cause muscle to contract— the researchers could watch the flashes become brighter as the muscle grew stronger.

“We could see and measure in real time how blood vessels grew into the implanted muscle fibers, maturing toward equaling the strength of its native counterpart,” said Juhas.

The engineers are now beginning work to see if their biomimetic muscle can be used to repair actual muscle injuries and disease.

“Can it vascularize, innervate and repair the damaged muscle’s function?” asked Bursac. “That is what we will be working on for the next several years.”

This work was supported by a National Science Foundation Graduate Research Fellowship and the National Institute of Arthritis and Musculoskeletal and Skin Diseases (AR055226).

A PDF of the article is available for download for free courtesy of DukeSpace.