Hoffman says it’s time to focus on a little-studied factor in human development and disease: Physics

Medicine has come a long way as scientists figured out more and more about the body’s chemistry, biology, and genomics. To take it further, Duke engineer Brenton Hoffman says it’s time to focus on another important, but little-studied, factor in human development and disease: physics. 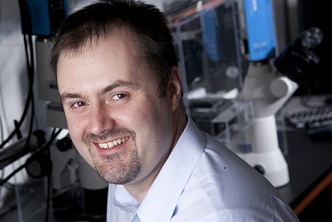 “Usually when we get sick, we take a pill that affects our chemical systems,” says Hoffman, an assistant professor of biomedical engineering in the Pratt School of Engineering at Duke. “But if you look at diseases like cancer, cardiovascular disease, some of the muscular dystrophies, they have a very large mechanical component that’s not well understood.”

Hoffman’s forays into the relatively new field of mechanobiology—the study of how physical forces like those from blood flow or cell movement affect cell behavior—could yield new approaches to tissue regeneration, new treatments for disease, and new ways to understand and prevent birth defects. In fact, the promise is so great that he’s won two major awards this spring to further his research, including the 2013 Searle Scholar Award, given to the nation’s 15 most promising new faculty in the biomedical sciences and chemistry, and the 2013 Basil O’Connor Starter Scholar Research Award from the March of Dimes.

“Brent is an outstanding scientist and engineer. He is very personable and collaborative and has already done a great job making connections at Duke with faculty in the medical center. The Searle Scholar award is a testament to his hard work and creativity.”  -- Craig Henriquez, professor and chair of biomedical engineering

These awards rarely go to engineers—but Hoffman is an unusual engineer, who earned his PhD in chemical and biomolecular engineering while studying under a polymer physicist at the University of Pennsylvania and then learned molecular biology as post-doctoral fellow in the Cardiovascular Research Center at the University of Virginia.  He says that bringing engineering expertise in physics and math into the biological arena will open the door to new discoveries.

“Engineering is about helping—‘what can I put together to help other people?’” he says. “Until now there has been no way to study how physical forces change cellular behavior on the molecular level. As an engineer, I want to make the tools we need to solve the problem.”

For example, it’s known that cells respond to force by altering their structure—for example, the force of blood flow is critical to helping the cells of the vessel walls develop and behave normally. With cancer, some scientists now believe that the physical changes in cells and their local environment that make cancerous tissue stiff—the palpable “lumps” we all look for in self-exams—may actually be a trigger for cancer to spread. And part of what’s holding up the goal of growing new tissue and new organs in the lab is the fact that cells won’t grow properly in a culture that holds them too tightly or too loosely. 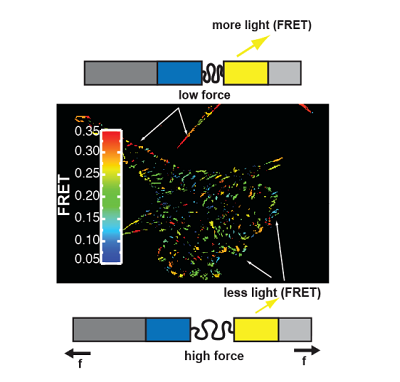 Until recently biologists had no way to understand how these processes worked. But Hoffman and his team have developed the first tool to help cell biologists see under a microscope which molecules within a cell are reacting to a physical force and which ones aren’t. The “tension sensor” consists of a specially engineered sensor that glows like a fluorescent jellyfish under normal conditions, but dims if it is stretched out by force. The scientists place the sensor inside certain proteins that help form the physical link between the cell and its surrounding environment. When a physical force touches the engineered protein, the protein stretches, and the resulting tension dims the sensor’s glow.

The tool allows scientists to see exactly which proteins the cell is pulling on or being pushed by its external environment. Even better, unlike many of the traditional tools used cell biology studies, which must destroy the cell and its mechanical connections to tell scientists what its proteins are up to, the tension sensor tool allows cells to remain in a natural state.

With the $300,000 Searle Scholar grant, Hoffman plans to use the tension sensor tool to develop a “parts list” to determine which of the 150-plus types of proteins that mediate the linkages  between a cell and its external environment are mechanically sensitive. He then will use time-lapse imaging and mathematical modeling to determine, for the first time, the exact pathways and process by which physical forces result in molecular changes inside a cell.

Learning which molecules help the cell sense its mechanical microenvironment can ultimately contribute to the development of a completely new class of targeted therapies for diseases like cancer, he says.

Hoffman’s work is also important to understanding how cells migrate during normal and abnormal human development. With support from the March of Dimes, he’s studying how cells “hold hands” to pull and push each other along in processes like embryonic development, when armies of cells band together to move into position to eventually form a spine, a brain or a belly. Many congenital diseases, such as cleft palate or neural tube defects, arise from faulty connections between the cell and external environment – the cell can’t sense pulling or pushing the way it should and so does not bind to other cells to move into position. Hoffman’s tension sensor tool provides a way to show precisely where the faulty connection lies, giving biologists a better sense of how to target the problem.

“This is early work,” Hoffman says. “Mechanobiology is such a new field, we don’t have the tools or sophisticated ideas to understand every mechanical contributor to disease. But we will. And we have to understand it before we can fix it.”