Li’s piece, published by Slate, featured her own research on the psychology and neuroscience of risk-taking in children

Rosa Li, a PhD student in psychology and neuroscience, has been named the winner of the 2016 Merritt Science Journalism Award. The $500 award recognizes a Duke graduate or undergraduate student for the best piece of science journalism produced during the previous calendar year. 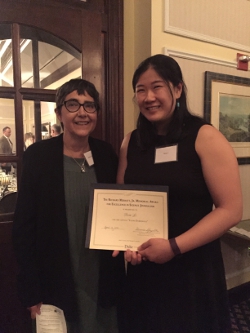 In this year’s competition, nearly 20 Duke graduate and undergraduate students submitted articles and blog posts on topics from invasive beavers to digital health innovation to atmospheric haze. Li’s piece, originally published on Slate.com, featured her own research on the psychology and neuroscience of risk-taking in children. The judges praised the entry as a well-written, solidly reported, compelling and highly accessible piece that provides an excellent model for other researchers who wish to share their work with the general public.

The award was given on April 18, 2016, at the Washington Duke Inn during an event hosted by the DeWitt Wallace Center for Media & Democracy held in conjunction with the Melcher Award and Futrell Award programs. Li was congratulated by Kathy Merritt Flynn, wife of the award’s namesake Richard Merritt, who was a longtime writer and media relations specialist for Duke University and Duke Medicine, with 25 years of service at the time of his death in 2013.

The committee also recognized two other excellent submissions as runners-up: