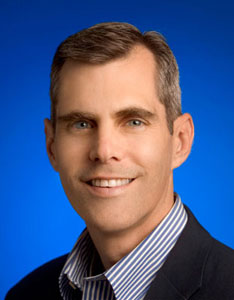 The analytical thinking and problem solving skills that come from an engineering background have been common threads throughout my entire working career.

It seems his engineering studies at Duke, and subsequent studies at business school and work in start-up technology companies were all leading to this – an upper management position at Google, a firm that is not only a company, but a verb.

It was an Angier B. Duke scholarship that lured the Salisbury, N.C. native to Durham. And while he always had a keen interest in science and mathematics, he tried to maintain a balance between academic and outside interests, whether by participating in intramural sports or taking humanities classes. It also didn’t hurt that two of his four fours year at Duke coincided with national championship men’s basketball runs, most of the games he witnessed personally at Cameron Indoor Stadium.

“I initially came to Duke as a Trinity freshman,” Alfonsi said. “At the time I wasn’t really sure what I wanted to do. I took a lot of science and math courses in that freshman year, like calculus and chemistry. However, when it came time for sophomore year – I transferred to engineering. In a way, I was swimming against the tide. Many kids were transferring out of the engineering school after their first year because it was so hard. He recalled a saying going around at the time at Duke that EE did not necessarily mean “electrical engineering,” but “eventually economics” as a major.

“A lot of eyebrows were raised when I transferred to engineering,” he continued. “At the time, it was unusual. I enjoyed science, but I was determined not to be one-dimensional – so each semester I made sure I took one class just for the soul.”

In fact, between his junior and senior years he spent a summer at Oxford studying English literature.

As it turns out, his engineering background proved invaluable as he combined his love of technology with a growing interest in the business side of technology development. With his Duke degree in hand, he spent the next two years in the Atlanta offices of McKinsey & Company, a management consulting firm, before heading off to the Stanford University Graduate School of Business. It was then the West Coast bug bit, and hard. Though he tried on several occasions to move back to the East Coast, California always beckoned.

After another stint at McKinsey, he served as vice president at a number of high-tech start-ups, including Zaplet, Inc., Velant, Inc., and Tellme Networks, which was acquired by Microsoft in 2007 for more than $800 million. Ironically, many friends and colleagues from those earlier ventures are now at Google as well.

While the uncertainty of starting and running a new venture satisfied both his technical and business aspirations, Alfonsi said that Google – for a large company – is an inspiring place to work.

“I serve as vice president of global online media sales,” he said. “My team is responsible for a big chunk of advertisements that reach beyond the core search ads we show on Google.com.  These areas include display ads on partner websites, ads on mobile devices, and video ads on YouTube. We handle the mid-market clients – not the Fortune 500 companies or really small businesses – but those in between. Google has had a lot of success in these markets – my team is responsible for several billion dollars in annual revenue, serving clients across the Americas, Europe, and Asia, so it keeps us pretty busy.

“The future for Google depends on many of these newer business areas.  We’re making big investments in areas such as mobile, which as a business has been on fire,” he continued. “It’s hard to imagine a more exciting time than now in this space. Smart phones have become so ubiquitous that they’ve practically become invaluable extensions of ourselves and fundamentally change how we interact with information and each other.”

In all his journeys throughout the entrepreneurial world, Alfonsi finds that his engineering training has served him well.

“Google is a company that is remarkable in how highly it prizes and values engineering and innovation,” he said. “It is an engineering-driven culture. Even though I’m on the business side now my engineering and product management background make it easier to connect very well with the product guys too, which is critical.

“More broadly, the analytical thinking and problem solving skills that come from an engineering background have been common threads throughout my entire working career,” he added.

Though he personally hasn’t been on campus for recruiting trips for Google, he does have a word of advice for current Pratt students.

“Google is famous for asking off-the-wall questions to see how potential recruits can think on their feet,” Alfonsi said. “So be prepared. Also, academic performance is important – some people are surprised how important that can be. The recruiters look at your overall performance – just be ready to tell your story and what distinguishes you from the others.”