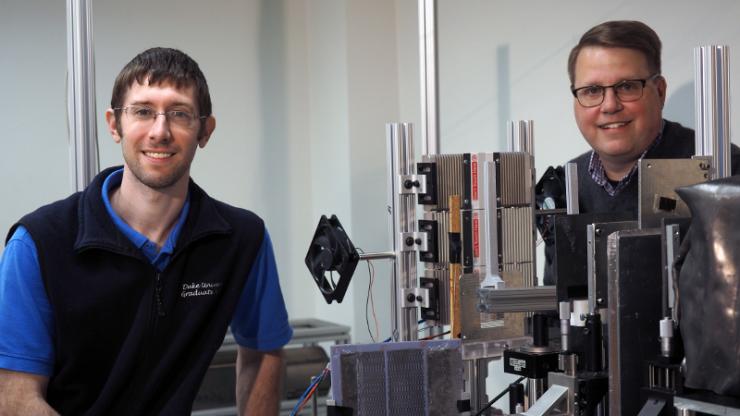 The US Department of Homeland Security (DHS) has tapped the expertise of electrical engineers at Duke University to design and develop a new type of X-ray scanner that combines the best features of the two technologies. With the ability to detect not just the 3D shape of an object but its molecular composition, the resulting device could one day become standard in airports the world over.

Under a three-year, $5.83 million contract with DHS, Duke researchers will work with collaborators at the University of Arizona, private industry firm Smiths Detection, and Durham, NC-based startup Quadridox, Inc. to bring to market the advanced X-ray detection technology.

“A hospital will spend a million dollars on a thorough scanning device that can process four relatively predictable people in an hour,” said Greenberg. “An airport wants a device that can process thousands of bags—which could literally contain just about anything—each hour for less than $100,000. That’s why airport security technology is so challenging.”

The technology at the heart of the new project is a hybrid X-ray system that combines a multi-view transmission with X-ray diffraction tomography. The former involves passing X-rays through an item from multiple angles to develop a 3D image and is already in use in many airport screening devices. The latter currently doesn’t exist outside of laboratory prototypes and was originally explored beginning in 2012 by Greenberg and David Brady, the Michael J. Fitzpatrick Professor of Photonics at Duke.

X-ray diffraction tomography involves gathering information from X-rays that have bounced off of an object to determine what materials it is made out of. When an X-ray ricochets off of an object, its deflection angle and wavelength create a sort of “fingerprint” unique to that material’s atomic structure. The technology to ID these fingerprints already exists. The challenge is in engineering a system that can do it quickly.

The standard approach is to block all X-rays except those coming from a specific direction to ensure the detector only gathers the ones carrying the fingerprint information. This results in very few X-rays reaching the detector, however, and takes too long to gather enough data to be useful to a high-throughput security scanner.

The Duke team’s approach has been to use a coded aperture, a sort of pierced shield that allows X-rays traveling at many different angles to pass through its holes. The trick is in knowing the exact pattern being used to block the X-rays, which a computer can then use to process the larger, more complex signal. This allows the researchers to gather enough deflected X-rays in a short time span to make a positive ID on the material being scanned.

The original project culminated in a prototype that worked, but was far from a commercially viable product. Now, Greenberg and Gehm along with Arizona’s Amit Ashok plan to use computer simulations to improve on that initial design while simultaneously integrating multi-view transmission technology.

“We’re actually kind of taking a step back in this project in the hopes of taking several steps forward,” said Greenberg. “We’re going back to the drawing board in terms of system design and trying to determine the fundamental performance limits of such a hybrid system. That will help us then create an optimal design and build a real, robust scanner that considers performance as well as commercial and deployment constraints.”

“We’ve spent the past five years developing a really high-performance X-ray simulation tool that allows us to probe many thousands of synthetic pieces of baggage to explore the performance of arbitrary systems,” said Gehm. “We’ll be turning that simulation capability loose on the problem of finding the hardware configuration that provides the best hybrid transmission/diffraction approach.”

Ashok’s expertise will allow the team to use information-theoretic design to look at the fundamental limits of the group’s designs. By computationally modeling various configurations, Ashok will help determine the optimal framework for the system’s hardware and software before anything is even built.

“A system can succeed despite bad software if the signal coming from the hardware is excellent,” said Ashok. “Similarly, it can have terrible hardware but get the job done through an amazing algorithm. Information-theoretic design allows us to disentangle these two aspects of a final system to determine the optimal solution for each.”

Helping move these simulations forward will be a new $400,000 GPU-enabled computing resource being added to the Duke shared computing cluster. Once the system is designed, the team will turn to Smiths Detection, a global leader in threat detection and screening technologies, and a local startup called Quadridox—formed by Greenberg, Gehm, Ashok and Anuj Kapadia, assistant professor of radiology at the Duke University School of Medicine—to build and test a prototype device.

“The initial work on this technology never quite got to the point where a commercial partner would want to take a shot at developing a device,” said Greenberg. “But we’re hoping in taking a slightly different approach, we can engineer a security scanner that combines two useful technologies for the first time that works much better than any scanner that relies on only one or the other.”