One day your new smartphone will slip from your hand to the sidewalk, and the shattered screen will need to be replaced—and then replaced again. The speaker will stop working. The processing speed will slow under the weight of 10,000 photos of your dog. Soon, you’ll be headed to the store for an upgrade, like more than 1.5 billion others every single year.

The endless production and disposal of consumer electronics has an oversized impact on the environment, though. Take for example just one of a smartphone’s many components: the touch-sensitive glass, which is doped with rare earth elements.

Most of those rare earth elements come from Chinese mines. To get at them, vast swaths of topsoil are stripped from the earth, and chemicals are used to leach them out. Those chemicals are either pumped directly into the earth or held in ponds that are prone to leakage and spillage. 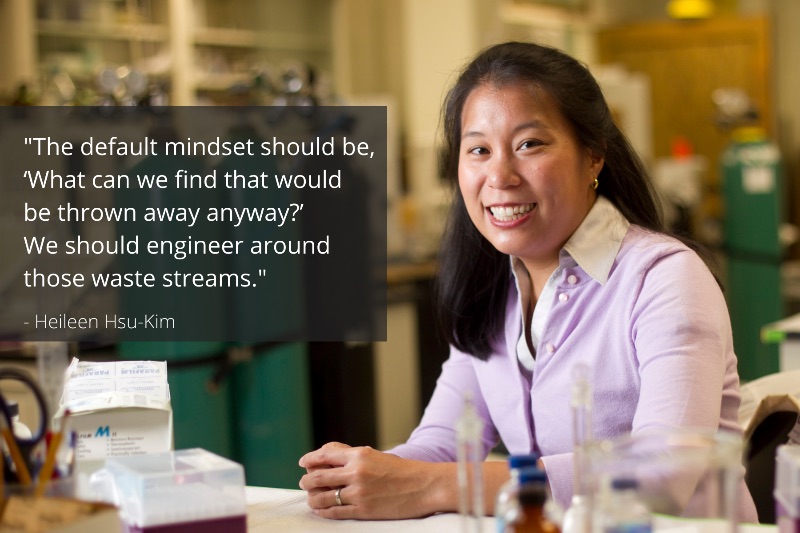 The U.S. generates almost a quarter of its electricity by burning coal, a process that leaves a considerable amount of coal ash waste behind. Much of the ash is incorporated into building products including cement, but sometimes, if the coal isn’t burned completely, the ash contains a lot of small carbon bits. If these coal fragments were incorporated into concrete, air pockets would form around them and make the concrete prone to cracking. So instead, that low-grade ash is shoveled into vast pits, which are susceptible to the same kinds of failures as mining wastewater ponds.

“Oftentimes, virgin materials are desirable because they’re high quality,” said Hsu-Kim. “I’d like to see a different approach—the default mindset should be, ‘What can we find that would be thrown away anyway?’ We should engineer around those waste streams.”

Hsu-Kim said the discarded ash is rich in resources and can be further refined to make specialty building materials like high-strength concrete and barrier walls. “You just have to get out the impurities,” she said, “which are rich in heavy metals, as well.”

Revenue isn’t the only thing of value that can come from re-engineering the supply chain.

Economic models show that the heavy metals wouldn’t generate nearly as much revenue as building materials would, for the plants extracting them—but revenue isn’t the only thing of value that can come from re-engineering the supply chain, said Kim. “There are aspects of the reclamation process that are hard to monetize—like having a domestic resource for metals that are mined overseas and diversifying a resource supply so you’re not as highly subject to geopolitical instability,” she said.

Often, the strategies used to remediate abandoned industrial sites are also intensive—and expensive. To clean contaminated soils and sediments around abandoned industrial sites, they’re frequently dredged and the toxic waste disposed of elsewhere, or capped. But Duke civil and environmental engineering professor Claudia Gunsch is battling toxic pollutants with the help of some unlikely allies. She studies naturally existing microbial communities in soil, water and sediment—microbes that can break toxic pollutants down and render them harmless.

But of the multitudes of microbes out there, how exactly does she identify and select the right communities for the job?

Microbes sometimes evolve over decades to adapt to the pollutant as a food source.

Frequently, she’ll look at the site of the pollution, where microbes sometimes evolve over decades to adapt to the pollutant as a food source. In that case, she can take a sample back to the lab, cultivate it and experiment with ways to supercharge the microbes’ abilities, then replicate those conditions at the contaminated site.

“Think of it like precision health, where you consider a medicine for a particular condition for a particular person,” said Gunsch. “We’re trying to figure out how to manipulate an environment to promote the growth of targeted microbes at that particular site.”

Other times, if Gunsch is interested in a specific pollutant, she can look at the local wastewater treatment plant for a microbe capable of breaking it down. That’s because the veritable witch’s brew of pollutants that we humans collect on our skins and wash down the drain, or excrete and flush away, is brimming with microbial specialists. 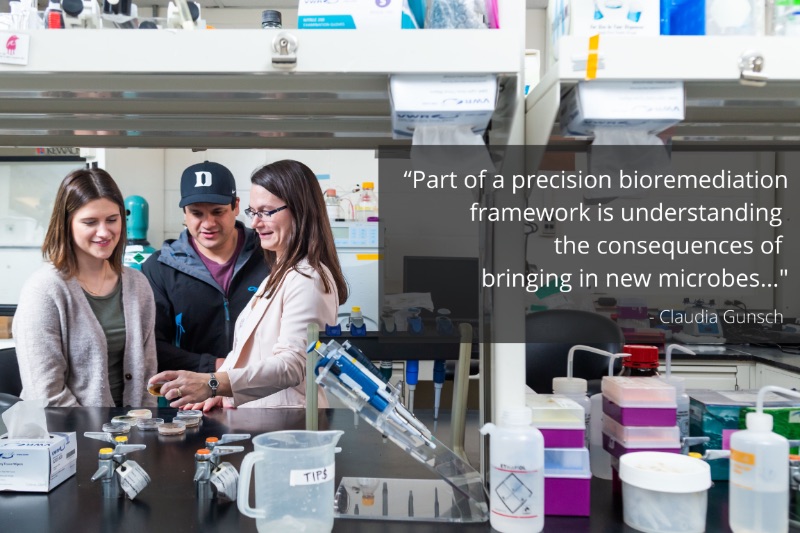 “It’s really simple. We take a sample of wastewater, we take it back to the lab, we add whatever contaminant we want, and we look at the fate of that compound over time,” said Gunsch. “If the compound breaks down, then you try to enrich the microbe that does that.”

The less-simple part of Gunsch’s research is trying to predict what will happen to an entire delicately balanced ecosystem when a new microbe is introduced. “Part of a precision bioremediation framework is understanding the consequences of bringing in new microbes whose functions have been carried out by some of the other microbes in the community. What is the net impact?” Gunsch asked.

In the long term, said Gunsch, she aims to develop a “menu” from which specific bacteria could be chosen to break down a designated contaminant, based on their ability to coexist with the microbial fingerprint already at a site in need of remediation.

Gunsch said that goal is complicated by the fact that the vast majority of microbes have never before been cultured—less than 0.1 percent of them, in fact. And to understand one microbe, she said, you must also understand all of its neighbors in the community; you can’t cultivate one by itself, without also cultivating the next-door strain that contributes something the community needs to thrive.

Just down the hall from Gunsch’s lab, a couple of her colleagues are wading into another research wilderness—a sea of plastics.

Let’s take another look at your new smartphone. Consider how many of its components are made of plastic. The case, the charger, and even the thin plastic film the box is wrapped in are usually thrown into the trash. In fact, humans have produced billions of tons of plastic--and recycled less than 10 percent of it.

Increasingly, researchers are sounding alarms about how these materials break down after they’re discarded, where the nanoscale particles of the plastic and the plastic additives end up, and what effects they can have on the environment and human health.

Increasingly, researchers are sounding alarms about how these materials break down after they’re discarded, where the nanoscale particles of the plastic and the plastic additives end up, and what effects they can have on the environment and human health.

“When we think about plastics in the environment, we think about the bird with the six-pack ring around its neck, or fish whose guts are full of fishing line,” said professor and CEE chair Mark Wiesner.  “But there’s also what we believe to be a huge amount of plastic out in the ocean—and in fresh waters as well—that’s at the nanometric scale.” 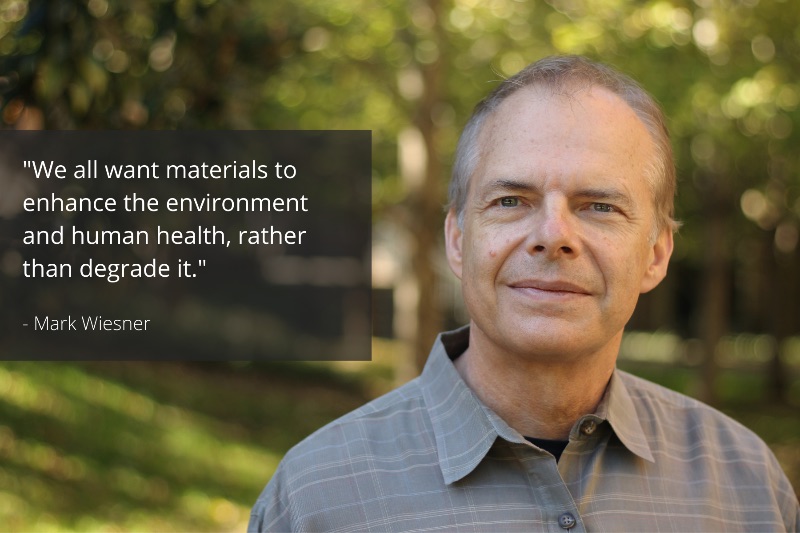 Wiesner is one of the world’s leading experts in nanomaterials; he’s led the NSF-funded Center for the Environmental Implications of NanoTechnology, or CEINT, for more than a decade. Recently, he’s been working on a project with the Army and the Consumer Product Safety Commission, looking at different ways that plastic composites can degrade—whether they’re being tossed around by ocean waves or gnawed on by a teething child—and calculating the rate at which they release.

“We know where engineered nanomaterials go, because they’re so brilliantly designed,” said Wiesner. “We can track them in complex environments, and we know the really small particles collect in animal tissues. They cross the blood-brain barrier and the intestinal tract, and they accumulate in the liver.”  Plastics can even be passed maternally in zebrafish, with adverse effects to heart and neurological function.

And it’s not just the plastic itself that’s the problem, according to environmental chemist and CEE associate professor Lee Ferguson. 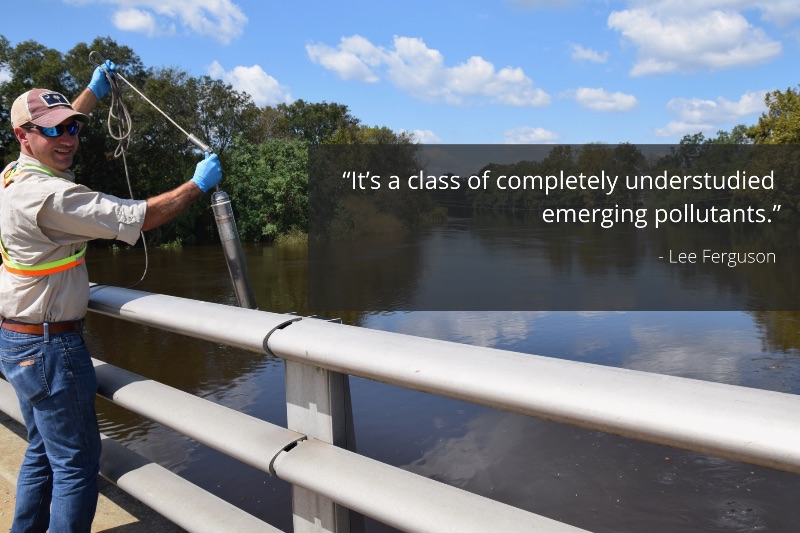 Ferguson has made locating and studying emerging contaminants the focus of his entire career. His lab specializes in non-targeted analysis, which is exploratory in nature—rather than zeroing in on a single known contaminant, his lab characterizes the sample’s entire composition. Some of his earliest experiments with the technique involved house dust and river water, and over and over Ferguson saw plastic additives popping up in the samples he was collecting—things like antioxidants and UV inhibitors, which keep plastic materials from degrading, and plasticizers, which make them more flexible.

Over and over Ferguson saw plastic additives popping up in the samples he was collecting—things like antioxidants and UV inhibitors, which keep plastic materials from degrading, and plasticizers, which make them more flexible.

Sometimes, said Ferguson, the chemistry points to an origin. In water sources including North Carolina’s Haw, Neuse and Cape Fear rivers, for example, Ferguson’s lab has identified compounds associated with the manufacture of car tires—vulcanization accelerants and hindered amine light stabilizers, to name just a couple. These compounds peel away from tires as the rubber meets the road and make their way into the environment in stormwater.

Yet it is difficult to find information about how these compounds affect human health and the environment, Ferguson noted. “When I went to look at the literature, there was almost nothing known about these additives, from the standpoint of their environmental fate or potential toxicity,” he said. “It’s a class of completely understudied emerging pollutants.”

Ferguson co-leads the water quality monitoring program of the Polyfluorinated Alkyl Substance Testing (PFAST) network, which has sampled around 350 municipal water supplies around North Carolina—a program established by a $5 million grant from the state legislature after GenX, a Teflon byproduct, showed up in Wilmington’s drinking water several years ago.

That’s not his area of expertise, he emphasized—his specialty is in assessment. But along with his colleagues in Duke CEE, he’s working to make materials more sustainable, from cradle to grave.

It might be making packaging from algae-based substances rather than plastic, said Wiesner, or applying Gunsch’s microbial biofilms to the soil via a biodegradable matrix like cellulose rather than a traditional polymer.

“We all want materials to enhance the environment and human health, rather than degrade it,” said Wiesner.