DURHAM, N.C. -- Just as a chameleon changes its color to blend in with its environment, Duke University engineers have demonstrated for the first time that they can alter the texture of plastics on demand, for example, switching back and forth between a rough surface and a smooth one.

By applying specific voltages, the team has also shown that it can achieve this control over large and curved surface areas. “By changing the voltage applied to the polymer, we can alter the surface from bumpy to smooth and back again,” said Xuanhe Zhao, assistant professor of mechanical engineering and materials science at Duke’s Pratt School of Engineering. “There are many instances, for example, when you’d want to be able to change at will a surface from one that is rough to slippery and back again.”

Scientists have long been able to create different patterns or textures on plastics through a process known as electrostatic lithography, in which patterns are “etched” onto a surface from an electrode located above the polymer. However, once the patterns have been created by this method, they are set permanently.

“We invented a method which is capable of dynamically generating a rich variety of patterns with various shapes and sizes on large areas of soft plastics or polymers,” Zhao said.  The results were published online in the journal Advanced Materials. 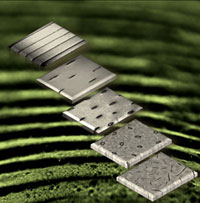 “This new approach can dynamically switch polymer surfaces among various patterns ranging from dots, segments, lines to circles,” said Qiming Wang, a student in Zhao’s laboratory and the first author of the paper. “The switching is also very fast, within milliseconds, and the pattern sizes can be tuned from millimeter to sub-micrometer.”

The findings follow Zhao’s earlier studies, which for the first time captured on videotape how polymers react to changing voltages. Those experiments showed that as the voltage increases, polymers tend to start creasing, finally leading to large craters. This explained in physical terms, for example, why polymers used to insulate electric wires tend to fail over time. The new lithography strategy takes useful insights from this failure mechanism.

On a more fanciful note, Zhao described the possibility of creating rubber gloves whose fingerprints could be changed on demand.

“The changeable patterns we have created in the laboratory include circles and straight and curved lines, which are basic elements of fingerprints,” Zhao said. “These elements can be dynamically patterned and changed on a glove surface that covers fingertips.

“A spy’s glove may be cool, but probably not for everyone,” Zhao said. “However, the same technology can produce gloves with on-demand textures and smoothness tuned for various applications, such as climbing and gripping. Furthermore, surfaces capable of dynamically changing patterns are also useful for many technologies, such as microfluidics and camouflage.”

Other potential usages of the new method include creating surfaces that are self-cleaning and water-repellant, or even as platforms for controlled-release drug-eluting devices.

This is beautiful basic research with a huge potential for applications, a new technology platform is developed that allows the
generation of dynamical patterns on large areas simply by theapplication of electrical voltages," said Siegfried Bauer, soft matter physics chair at the Johannes Kepler university in Linz, Austria.

The Duke study was supported by the Research Triangle Materials Research Science and Engineering Center, which is funded by the National Science Foundation, as well as the Lord Foundation and a Haythornthwaite Research Initiation grant.

Other members of the research team were Duke’s Mukarram Tahir and Jianfeng Zang.