Printing Outside the Borders 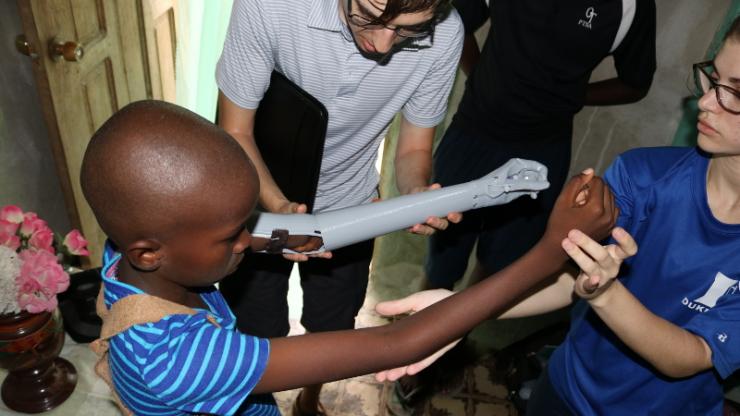 As soon as Emily Shannon saw the little boy missing half of his left arm from across the street, she knew she had to try to help him.

Designing and building a prosthetic limb, of course, is not an easy task. It’s even harder when the prospective recipient is a Haitian boy living 1,200 miles away. And you don’t speak Creole. And his country is on your school’s Restricted Regions List. And you’ve barely begun delivering your first finished prosthetics.

None of those hurdles mattered to Shannon, who had just completed her second year at Duke University—where, coincidentally, she had joined a fledgling student group focused on designing and 3D printing prosthetics.

And she knew she had to try.

“It was a total long shot,” said Shannon, who met Chris, as the Haitian boy’s name turned out to be, while delivering meals in Haiti during a summer trip with her church. “But I told our host that I was in this club where we actually build arms, and asked if I could talk to the boy to see what we could do?”

Their host agreed, and helped convey Shannon’s idea to Chris and his family, who were happy to receive the help.

Maker Club with a Mission

The club Shannon was referring to—called eNable—is an international community that shares open-source files and designs for 3D-printing prosthetics. The Duke chapter was founded by Henry Warder and Richard Beckett-Ansa, who discovered the foundation through a local chapter in Virginia.

The duo got a small grant to start the club from the Duke Innovation Co-Lab, a creativity incubator focused on exploring how new and emerging technologies can fundamentally reshape the research, academic and service missions of the university.

That was in the spring of 2016. After a presentation at the Co-Lab, the group recruited Shannon, who became president when Warder and Beckett-Ansa graduated. By the end of the fall semester, Duke eNable, advised by Michael Faber, manager of the Duke Innovation Co-Lab, was more than 30 people strong, working to deliver a handful of prosthetics to people in the Durham community. One is being designed from scratch to provide a local baker with a custom solution for decorating cakes. Another for an 11-year-old boy relies more on shared files from the open-source community, but with a few tweaks, like gadgets to help him ride a bike and use a slingshot. A third recipient, recently graduated from pharmacy school, needs a design that will help her pinch skin to deliver subcutaneous injections.

Whether based on open-source files or built from the ground up, all three are challenging tasks.

“This is anything but plug and play,” said Gabriel Antoniak, a senior studying biomedical engineering and design lead on the cake-decorating prosthesis. “Even when you start with a file that looks good in the software, lots of details need to be tailored. When you actually bring a prototype to a recipient, it’s always a little tight here or a little loose there. And making those changes to a source design file is never as easy as it sounds.”

And then, of course, there’s Chris, whose prosthesis presented an entirely different set of challenges.

For the most part, 3D-printing prosthetic limbs is not an expensive proposition. The Duke Co-Lab provides printing filaments for free, and extra materials typically only involve things like screws, string, Velcro or foam. All told, a finished device can be produced for a mere $20 - $30 in raw materials.

But traveling to Haiti is expensive. To fund Shannon’s quest, the group turned to The Given Limb Foundation, which is dedicated to improving the lives of veterans and other individuals with amputations or diminished use of their limbs. After pitching their project to co-founders Martha McDade and Janis Rehlaender—both Duke Engineering alumni themselves—the foundation agreed to provide funds for travel.

“That was the first indicator that we could actually make this happen,” said Shannon. “That’s also when we realized that Haiti is on Duke’s Restricted Regions List.”

The Restricted Regions List is a list of destinations deemed unsafe for travel by Duke, with decisions being made by the Provost based on recommendations from the Global Travel Advisory Committee (GTAC). While this presented another obstacle to the group, it didn’t end their journey.

The group filled out a large proposal filled with references, forms and comments on the safety of their proposed area of visit. After some deliberation reaching all the way up to Provost Sally Kornbluth, the travel was approved.

“The students were really great to work with,” noted Eric Mlyn, the Peter Lange Executive Director of DukeEngage, assistant vice provost for civic engagement and chair of the Provost’s GTAC. “They had a goal and they executed each step to achieve it like a well-oiled machine.”

Now the group could finally book travel and begin the design process. The problem was that they didn’t have any actual measurements.

“When we meet a recipient here in Durham, we have access to laser scanners, rulers, tape measures and everything else you might need,” said Antoniak. “The prototype for Chris’s prosthetic was based on pictures of his arm sitting next to a ruler.” To help mitigate this problem, Antoniak suggested they split their visit to Haiti into two trips. The first would have Shannon and Antoniak bring several prototypes to actually try on Chris’s arm while also allowing them to take actual measurements. The second would see Shannon travel with club member Joel Tewksbury to deliver the final product.

The group prepared for their first visit by printing three version of the prosthetic arm—one at the dimensions of their best guess, one scaled up by 10 percent, and another scaled down by 10 percent. The goal was to have at least one socket that would at least roughly fit to give them an idea of where they stood.

As it turned out, the one scaled up by 10 percent was the closest. But it was far from perfect.

“The prototype had the arm bending slightly away from his body, which is not quite right,” said Antoniak. “While we were there, we took a plaster cast of the arm so that we could pour a plaster mold once we returned. We also took a 3D scan using a structure scanner, and we took copious measurements with tape measures and calipers. After that, it was ironing out a lot of little details and designing an arm that, if changes needed to be made when we went back, could be tweaked as effectively as possible.”

After spending several weeks preparing for the final fitting, Shannon and Tewksbury embarked on a five- day, four-night journey to deliver Chris’s prosthetic arm. The task was nerve-wracking, as the group had to anticipate any obstacles that might pop up that couldn’t be solved with what they brought with them.

But the team’s hard work paid off, as only a few minor adjustments were needed. The foam padding buffering between Chris’s arm and the prosthetic’s plastic was a little loose, and the hand grip was not strong enough to allow him to open a new water bottle. The former was a quick and easy fix, while the latter only required a tightening of the gripping device and the addition of non-slip material around the entire gripping device.

“We had to adjust the harness to get the size and tightness right as well, but we had planned on that,” said Tewksbury. “As long as the adjustments didn’t need us to design or print anything, we knew we could handle them.” The team also brought replacement parts and a couple of larger sockets with them, and, through the help of a translator and the little bit of Creole Shannon had learned, showed Chris and his family how to swap pieces in and out. Because Chris doesn’t use his amputated left arm for much, the muscles aren’t as developed as they would be otherwise. As he gains new abilities with his prosthetic, and as nature takes its course with a growing boy, his arm will get bigger, and new sockets will be needed.

“The materials we delivered should be able to last Chris at least a few years,” said Shannon. “That gives us time to figure out what our next steps will be, whether that means rebuilding him a new arm down the line or getting him in touch with a larger philanthropic organization that can transition him to a more professional prosthetic.”

Whatever happens in the future, Chris and his family were very happy and thankful for the group’s efforts. It’s an experience the three Duke seniors won’t soon forget.

“The first thing that really struck me was the language barrier,” said Antoniak. “Trying to convince someone to lie down and stick their arm straight up in the air so you can take measurements made for some pretty interesting experiences.”

“And even though we were strangers in their home telling them to do all of these weird things, what struck me was the gratitude we saw in their faces,” said Shannon. “They put up with everything and then said thank you at the end. It was such an emotional interaction.”