Like alchemists, engineers from Duke University and the University of Missouri are developing a process to turn sewage into drinkable water, energy and useful byproducts at a cost of less than a nickel per person per day. 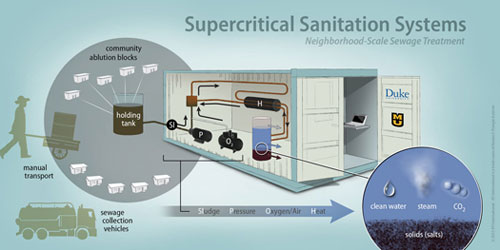 In addition to the technological aspects of the project, the researchers are investigating plans to make the technology economically self-sustaining in developing countries, since many areas with the greatest sanitation challenges are typically urban and low-income. The new approach will operate without connections to water, sewer or electrical lines.

The Bill & Melinda Gates Foundation is supporting the team’s efforts with a $1.18 million grant as part of the Reinvent the Toilet Challenge. Researchers expect that a working prototype will have been constructed at Duke in 15 months. It will be tested first in the U.S. and then deployed in South Africa, India or Ghana, depending on the results of ongoing feasibility studies.

"We not only want to design and build the right piece of equipment to improve sanitation, but one that is well-integrated into its community, both economically and socially," said Marc Deshusses, professor of civil and environmental engineering at Duke’s Pratt School of Engineering and principal investigator of the project. "We expect the end products of the process will be used by the communities to build businesses that make it self-sustaining."

The proposal is to produce a self-contained "toilet" unit that can be transported to locations overseas in a 20-foot container. The prototype will have the capacity to handle the daily fecal waste of about 1,200 users collected from community centers or neighborhood latrines directly piped or transported to the facility for processing. 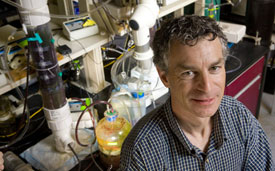 Deshusses, who received a grant from the Gates Foundation in 2011 to develop a novel sanitation system for the developing world, describes the technology that powers the process as a "pressure cooker on steroids." The technology behind the proposal is known as supercritical water oxidation (SCWO).

"When you heat water above 705 degrees Fahrenheit under pressure, it becomes a 'supercritical fluid,' thicker than steam but less dense than water," said co-principal investigator William Jacoby, associate professor of biological engineering at Missouri and director of its Carbon Recycling Center. "When we add oxygen to the process, it quickly 'burns up' any carbonaceous materials, including human waste."

Jacoby said that the SCWO process has been used to treat hazardous wastes, such as polychlorinated biphenyls (PCBs) and chemical weapons.

"In terms of human waste, the process is faster than other treatment methods, and it produces hot, and potable, water and excess energy in the form of heat," Jacoby said.

The reaction produces clean water, heat, carbon dioxide, benign salts and nitrogen, which can be used by the community or turned into business opportunities to support the system, the researchers said. For example, the water could be used in community showers or clothes-washing facilities and the heat could generate electricity.

While one team of engineers works on the technical aspects of the project, another will work in parallel on developing business plans to make the endeavor feasible not only economically, but also from a regulatory and cultural standpoint.

"The technology to treat the waste is not necessarily low-tech, but it is very sustainable, with no adverse environmental impacts, so our challenge is to make it cost-effective and self-sustaining," said co-principal investigator Jay Golden, who directs Duke’s Center for Sustainability & Commerce. He is also on the faculty of Pratt and Duke's Nicholas School of the Environment.

"By working with people on the ground, we’ll develop a plan for linking the system and its byproducts to specific community needs," Golden said. "More broadly, we’ll try to identify other regions where our model can be effectively duplicated."