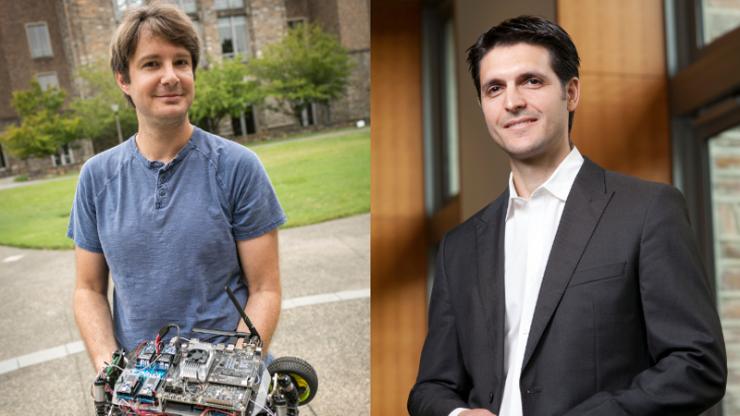 Two faculty members from Duke University’s Pratt School of Engineering are part of a new consortium that will pioneer the development of autonomous technologies for the United States Air Force to enable assured autonomous missions in complex, uncertain and adversarial conditions.

The sponsorship will cover an initial two-year period of $2 million, with extensions up to a total of six years and $6 million dollars. The consortium will collaborate with the Munitions (RW), Sensors (RY), and Space Vehicles (RV) Directorates within the Air Force Research Laboratory (AFRL).

“This Center of Excellence is the scientific embodiment of basic research for assured and trustworthy autonomy of the U.S. Air Force’s future cyber-physical systems operating in contested environments,” said Frederick A. Leve, program officer for the Dynamics and Controls Program at AFOSR.

"Autonomous systems must execute high-level mission plans with verifiable assurances despite operating in uncertain, potentially adversarial environments, where the integrity and availability of sensor information and communications may be challenged,” continued Pajic. “Consequently, the center’s efforts will focus on development of analysis, design and synthesis techniques and tools for potentially resource-constrained systems with complex dynamics to  enable their autonomous operation even in highly-contested adversarial environments.”

Pajic’s research at Duke focuses on high-assurance system design methodologies for cyber-physical systems (CPS), which feature tight interaction of computing with the physical world. CPS are the next generation of safety-critical embedded control systems, in domains spanning from autonomous vehicles, industrial automation and advanced manufacturing, to medical devices and systems, energy-efficient buildings and smart cities.

Pajic will lead the center’s efforts to design attack-resilient autonomous systems for the Air Force. He and his students will develop algorithms and design methods to ensure that these systems are capable of successfully performing their missions, with no human supervision, even under a range of cyber and physical attacks.

Zavlanos’s work at Duke centers on creating algorithms that allow groups of robots to work autonomously and collaboratively toward completing complex tasks in unknown environments. Within the new consortium, he will focus on tasks that extend beyond the classical point-to-point navigation and can capture temporal and Boolean requirements. For example, they can be sequencing or coverage, data gathering, intermittent communication or persistent surveillance, and can be captured using formal languages.

These methods are notoriously computationally expensive, especially for large numbers of robots, so his research will emphasize methods that are scalable and distributed. Reinforcement learning methods will also be developed for optimal decision-making in unknown environments.