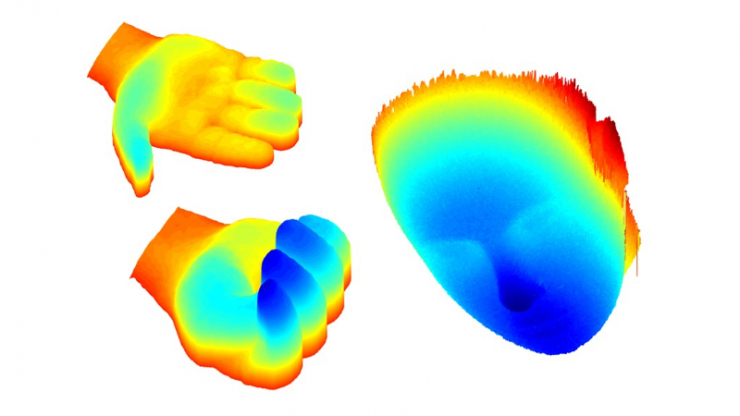 Even though robots don’t have eyes with retinas, the key to helping them see and interact with the world more naturally and safely may rest in optical coherence tomography (OCT) machines commonly found in the offices of ophthalmologists.

One of the imaging technologies that many robotics companies are integrating into their sensor packages is Light Detection and Ranging, or LiDAR for short. Currently commanding great attention and investment from self-driving car developers, the approach essentially works like radar, but instead of sending out broad radio waves and looking for reflections, it uses short pulses of light from lasers.

Traditional time-of-flight LiDAR, however, has many drawbacks that make it difficult to use in many 3D vision applications. Because it requires detection of very weak reflected light signals, other LiDAR systems or even ambient sunlight can easily overwhelm the detector. It also has limited depth resolution and can take a dangerously long time to densely scan a large area such as a highway or factory floor. To tackle these challenges, researchers are turning to a form of LiDAR called frequency-modulated continuous wave (FMCW) LiDAR.

“FMCW LiDAR shares the same working principle as OCT, which the biomedical engineering field has been developing since the early 1990s,” said Ruobing Qian, a PhD student working in the laboratory of Joseph Izatt, the Michael J. Fitzpatrick Distinguished Professor of Biomedical Engineering at Duke. “But 30 years ago, nobody knew autonomous cars or robots would be a thing, so the technology focused on tissue imaging. Now, to make it useful for these other emerging fields, we need to trade in its extremely high resolution capabilities for more distance and speed.”

In a paper appearing March 29 in the journal Nature Communications, the Duke team demonstrates how a few tricks learned from their OCT research can improve on previous FMCW LiDAR data-throughput by 25 times while still achieving submillimeter depth accuracy.

OCT is the optical analogue of ultrasound, which works by sending sound waves into objects and measuring how long they take to come back. To time the light waves’ return times, OCT devices measure how much their phase has shifted compared to identical light waves that have travelled the same distance but have not interacted with another object.

FMCW LiDAR takes a similar approach with a few tweaks. The technology sends out a laser beam that continually shifts between different frequencies. When the detector gathers light to measure its reflection time, it can distinguish between the specific frequency pattern and any other light source, allowing it to work in all kinds of lighting conditions with very high speed. It then measures any phase shift against unimpeded beams, which is a much more accurate way to determine distance than current LiDAR systems.

“It has been very exciting to see how the biological cell-scale imaging technology we have been working on for decades is directly translatable for large-scale, real-time 3D vision,” Izatt said. “These are exactly the capabilities needed for robots to see and interact with humans safely or even to replace avatars with live 3D video in augmented reality.”

Most previous work using LiDAR has relied on rotating mirrors to scan the laser over the landscape. While this approach works well, it is fundamentally limited by the speed of the mechanical mirror, no matter how powerful the laser it’s using.

“The world around us is 3D, so if we want robots and other automated systems to interact with us naturally and safely, they need to be able to see us as well as we can see them.”

The Duke researchers instead use a diffraction grating that works like a prism, breaking the laser into a rainbow of frequencies that spread out as they travel away from the source. Because the original laser is still quickly sweeping through a range of frequencies, this translates into sweeping the LiDAR beam much faster than a mechanical mirror can rotate. This allows the system to quickly cover a wide area without losing much depth or location accuracy.

While OCT devices are used to profile microscopic structures up to several millimeters deep within an object, robotic 3D vision systems only need to locate the surfaces of human-scale objects. To accomplish this, the researchers narrowed the range of frequencies used by OCT, and only looked for the peak signal generated from the surfaces of objects. This costs the system a little bit of resolution, but with much greater imaging range and speed than traditional LiDAR.

The result is an FMCW LiDAR system that achieves submillimeter localization accuracy with data-throughput 25 times greater than previous demonstrations. The results show that the approach is fast and accurate enough to capture the details of moving human body parts —such as a nodding head or a clenching hand — in real-time.

“In much the same way that electronic cameras have become ubiquitous, our vision is to develop a new generation of LiDAR-based 3D cameras which are fast and capable enough to enable integration of 3D vision into all sorts of products,” Izatt said. “The world around us is 3D, so if we want robots and other automated systems to interact with us naturally and safely, they need to be able to see us as well as we can see them.”