The "Pratt pouch," filled with anti-retroviral medication, could be a life-saver for a baby born in Africa of a mother infected with HIV

Americans by the millions rip open ketchup packets for their French Fries without even thinking twice about it.

This simple act, however, could in the near future be a life-saver for a baby born in Africa of a mother infected with HIV, especially if the pouch is filled with anti-retroviral medications. Studies have consistently shown that if newborns receive these drugs shortly after birth, their chances of coming down with the disease can be cut significantly.

For the past three years, Duke engineers have been tackling this simple question -- how best to get life-saving drugs into these babies, especially since most births occur in the home instead of a medical facility. Their solution is the “Pratt pouch,” named after Duke’s Pratt School of Engineering, and it could be an effective, simple and low-cost solution. 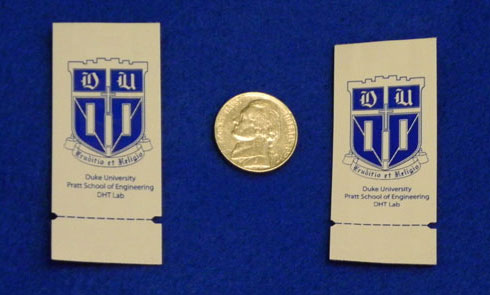 The U.S. Agency for International Development (USAID) is optimistic about the pouch’s potential -- it just awarded the Duke team a $250,000 grant to demonstrate how effective its approach can be in delivering a pre-measured dose of life-saving medication to newborns of HIV-infected Tanzanian women. Watch conference video.

The Duke team, as well as others from across the world, was honored earlier this month at a six-day conference in Washington, D.C., attended by U.S. and international dignitaries, including U.S. Secretary of State Hillary Clinton. The conference highlighted new technologies being developed for nations with little no resources for health care. Research grants were announced on the last day.

In Africa, the World Health Organization (WHO) estimates that more than 90 percent of new cases of AIDS were attributable to mother-to-child transmission.

“It is well-established that if these newborns can get anti-drugs within several days of birth, their chances of developing the disease decrease significantly,” said Robert Malkin, professor of the practice of biomedical engineering and director of the Developing World Healthcare Technology Laboratory at Duke. “However, many of these babies in Africa are born at home, and can’t always get the medicine in time.”

While health care workers in Africa have in the past tried packaging single doses by other means – syringes and containers – the doses have all suffered the same fate, namely water loss during storage and/or preservative loss. Drug manufacturers have not shown much interest in devising single-dose systems because of development costs and limited marketing potential outside the Third World, Malkin said. 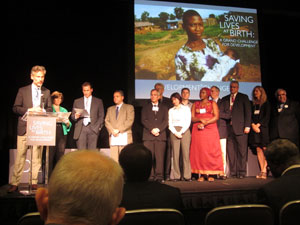 So the Duke team designed and produced its own solution -- a foil pouch lined with plastic that can hold a single dose of anti-retroviral medication. Under the Duke system, the drug is shipped in bulk overseas, where a local pharmacist fills individual pouches with specialized syringes that extends the shelf-life of the drug and reduces costs.

The hope is that the mother can tear off the top of the pouch and squeeze the drug directly into her newborn’s mouth. That may sound easy, but it is not always true, said Amanda Britt, a senior mechanical engineer student. She will be working with Malkin this semester researching strategies for making the process as easy as possible for the mother.

“The pouch itself has been undergoing modifications over the years, and our main focus now is fine-tuning its design to make sure it is easy to open, especially since the people who will be using it likely will not have seen anything like it before,” Britt said. “We’ll be looking at such things as notches along the side, or arrows or dotted lines – anything that will make process as uncomplicated as possible for the mother.”

The purpose of the two-year project, which starts later this fall, is to gauge the success of HIV-positive mothers in Tanzania correctly administering the drugs to their newborns. Malkin’s team will be working with a team of physicians and researchers from Duke University Medical Center, who have had a long relationship with Tanzania in conducting HIV/AIDS and infectious disease research.

“We’d like to enroll up to 200 mothers, about half who get their care in an urban setting, and half from a rural setting,” Malkin said. “In Tanzania, about 57 percent of births take place in the home. In other Africa countries, like Ethiopia, the rates are as high as 95 percent.”

The team plans to give the drug-filled pouches to pregnant mothers when they first see medical professionals for their pregnancy. At this time, they will be instructed on how and when to administer the drug after their baby has been born.

If the current study shows that mothers successfully utilize the pouch, the next step could be a much larger study involving two countries, and probably other anti-retroviral agents as well. Ultimately, Malkin would like to see a trial covering all of Africa.

The conference, and the granting of research support, was the first of its kind sponsored by the USAID.