Adapted from a press release from UPenn 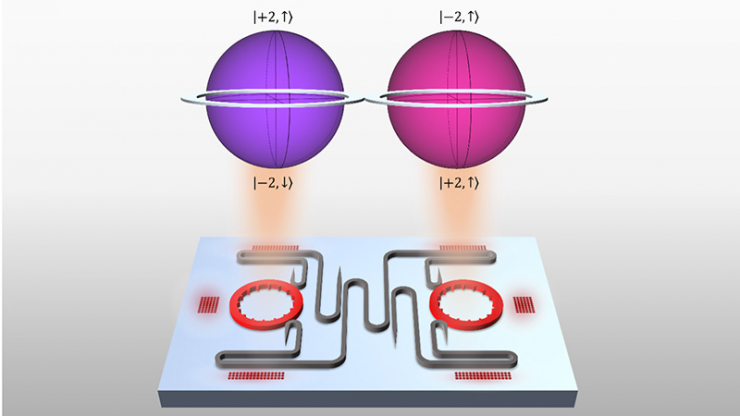 Researchers at Penn Engineering have created a chip that outstrips the security and robustness of existing quantum communications hardware. Their technology communicates in “qudits,” doubling the quantum information space of any previous on-chip laser.

Liang Feng, Professor in the Departments of Materials Science and Engineering (MSE) and Electrical Systems and Engineering (ESE), along with MSE postdoctoral fellow Zhifeng Zhang and ESE Ph.D. student Haoqi Zhao, debuted the technology in a recent study published in Nature. The group was partly inspired through a collaboration with Natalia Litchinitser, professor of Electrical and Computer Engineering at Duke University, who helped develop the original concept of using spin-orbit coupling to generate and manipulate states of light with increased degrees of freedom.

The collaboration also involved scientists from the Polytechnic University of Milan, the Institute for Cross-Disciplinary Physics and Complex Systems, and the City University of New York (CUNY).

While non-quantum chips store, transmit and compute data using bits, state-of-the-art quantum devices use qubits. Bits can be 1s or 0s, while qubits are units of digital information capable of being both 1 and 0 at the same time. In quantum mechanics, this state of simultaneity is called “superposition,” and makes it physically impossible for hackers to steal information.

Qubits, however, aren’t perfect. With only two levels of superposition, qubits have limited storage space and low tolerance for interference. To get around these limitations, researchers are working toward quantum bits that can have a state of superposition greater than two levels, which they call a qudit.

The Feng Lab device’s four-level qudits enable significant advances in quantum cryptography, raising the maximum secrete key rate for information exchange from 1 bit per pulse to 2 bits per pulse. The device offers four levels of superposition and opens the door to further increases in dimension.

“This demonstration of a microlaser generating reconfigurable high-superposition states is likely to advance high-capacity optical communication technologies,” said Litchinitser, who also helped interpret the results of the experiments.

Quantum communication uses photons in tightly controlled states of superposition. Properties such as location, momentum, polarization and spin exist as multiplicities at the quantum level, each of which is governed by probabilities. These probabilities describe the likelihood of a quantum system—an atom, a particle, a wave—taking on a single attribute when measured.

The hyperdimensional spin-orbit microlaser builds on the team’s earlier work with vortex microlasers, which sensitively tune the orbital angular momentum (OAM) of photons. The most recent device upgrades the capabilities of the previous laser by adding another level of command over photonic spin.

This additional level of control—being able to manipulate and couple OAM and spin—is the breakthrough that allowed them to achieve a four-level system. The difficulty of controlling all these parameters at once is what had been hindering qudit generation in integrated photonics and represents the major experimental accomplishment of the team’s work.

“Think of the quantum states of our photon as two planets stacked on top of each other,” says Zhao. “Before, we only had information about these planets’ latitude. With that, we could create a maximum of two levels of superposition. We didn’t have enough information to stack them into four. Now, we have longitude as well. This is the information we need to manipulate photons in a coupled way and achieve dimensional increase. We are coordinating each planet’s rotation and spin and holding the two planets in strategic relation to each other.”

“There is a lot of concern,” says Feng, “that mathematical encryption, no matter how complex, will become less and less effective because we are advancing so quickly in computing technologies. Quantum communication’s reliance on physical rather than mathematical barriers make it immune to these future threats. It’s more important than ever that we continue to develop and refine quantum communication technologies.”