Researchers have determined that the health risks taken on by artisanal, small-scale gold miners extend far beyond the miners themselves.

Based on a study of gold-mining operations in Peru, the miners’ practices not only contaminate local soil, sediment and water resources with mercury, they create hazardous levels of the neurotoxin in the food chain at least 350 miles downstream. 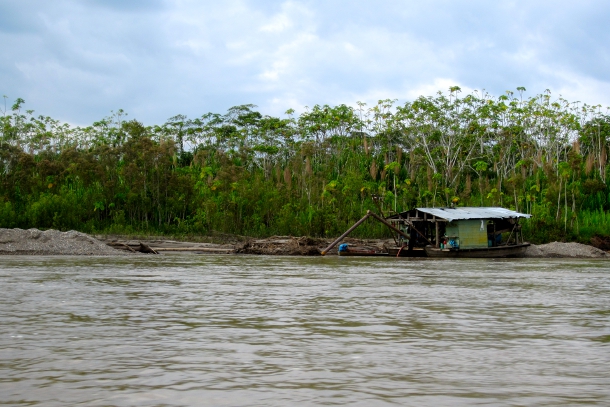 The study, led by Heileen Hsu-Kim, professor of civil and environmental engineering at Duke University, William Pan, professor of environmental science and policy and the Duke Global Health Institute, and Sarah Diringer, a Ph.D. candidate mentored by the pair, was recently published online in the journal Environmental Science: Processes & Impacts.

The Duke team looked at the wide-reaching effects of mercury contamination from gold-mining operations in Peru’s southern Amazon region of Madre de Dios. However, the same mining practices are present throughout South America, as well as in Africa and Asia. 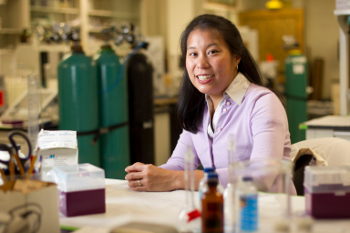 As the price of gold has soared during the past decade, thousands of Peruvians—mostly from the Amazon and sierra region of Cusco—have embraced artisanal small-scale gold mining to supplement their income. Mercury is used to bind loose flakes and bits of gold ore into hard chunks that can be more easily extracted from soil and sediment, and then burned off with blowtorches once the chunks are in hand.

The study found that the miners and their families are highly vulnerable to the impacts of mercury, with limited knowledge of mining’s environmental or human health effects. Rarely do they have adequate safeguards to limit the release of mercury into the air, soil or water, the researchers said.

Once in river sediments, mercury is taken up by microorganisms that convert it to a highly neurotoxic form. As other animals consume the microorganisms, the levels of the neurotoxin accumulate in larger predators, such as carnivorous fish, according to the study.

“We’ve known that the use of mercury presents health risks to miners and their families, but it also releases a lot of contamination that ends up downstream,” said Hsu-Kim. “Some of that mercury ends up in fish that other communities depend on as part of their diets, and that risk was not documented at all. We had heard anecdotal evidence, but this was the first scientific study to document the actual contamination.” 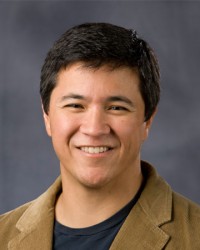 In the study, Hsu-Kim, Pan and their colleagues took samples from river sediment, water and fish at 62 sites near 17 communities over a 350-mile stretch of the Madre de Dios River and its major tributaries. The results showed an increase in mercury concentrations in the mining areas as well as downstream, where concentrations in fish now exceed World Health Organization guidelines for safe consumption for children and women of maternal age.

“The calculations were made assuming that people ate two fish meals per week,” Hsu-Kim said. “However, we have preliminary data from household health surveys indicating that fish consumption is actually much higher in many communities, which could increase the body burden and exceed safety limits even for healthy adults.”

While mercury can be dangerous to adults, the primary concern is how it can impair neurological development in children, infants and fetuses. Because mercury can cross the placental barrier if it is ingested by the mother, the metal can affect the development of a baby's cardiovascular and nervous systems. 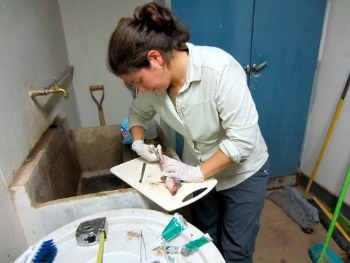 According to the Environmental Protection Agency, impacts on cognitive thinking, memory, attention, language and fine motor and visual spatial skills have been seen in children exposed to the neurotoxin in the womb.

The Madre de Dios region, home to some of the Amazon’s largest remaining swaths of virgin rainforest, is thought to host among the highest number of mammal, bird and amphibian species in the world. Animal and plant life there is so diverse that Peruvian law proclaims it to be the world’s “Capital of Biodiversity.”

“We recognize that these gold mining practices are a beneficial economic activity for families and have the potential to be environmentally sustainable,” Pan said. “To identify pathways toward sustainability, we have begun working with the Ministry of Health in Peru and local NGOs in Madre de Dios to raise awareness about the impacts of mining as well as engaging families, communities and other regional stakeholders to find mutually beneficial solutions for the humans and the environment."

This research was supported by the Inter-American Institute for Global Change Research (CRN3036).

The Once and Future Gene Therapy