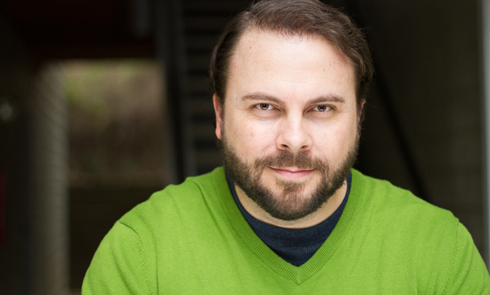 As an engineer, you’re learning how to think creatively. You’re accessing both sides of your brain much more than the layperson would assume.

Getting a Duke engineering degree as preparation for becoming an actor? For Matthew Cornwell, it wasn’t the most direct path, but it’s worked just fine.

“Whether it’s ever expressly stated or not, as an engineer, you’re learning how to think creatively,” he points out. “You’re accessing both sides of your brain much more than the layperson would assume.”

Similarly, actors don’t get by on raw talent, emotion, and passion alone. They use a series of disciplines and techniques – a process, a framework – if they practice their art at a high level. “To succeed and be versatile, you can’t just sort of survive on raw talent,” Cornwell says.

Cornwell was a sophomore in high school in Tampa, Florida, when the halves of his brain began vying to influence the direction of his life. He excelled at science in school, and when he went to the dollar theater by himself and watched Jim Carrey play Ace Ventura, Cornwell remembers, it was a revelation.

“I thought, yeah, that’s what I want to do,” he remembers. “I was always funny, but I was nonchalant. I was more likely to be a teacher’s pet than a cutup. But I thought, ‘This thing that I have inside? People do actually make a living letting that thing out.’ What kept me from totally focusing at that point was the idea of a real-world job and a real-world career and that what I should be focusing on was education and college.”

So, Cornwell accepted early admission at Duke, “a no-brainer, because it was really the only top-tier school I had applied to,” and after arriving in Durham, he was pleased to find himself on a campus with something to offer both his cranial hemispheres.

Though he was majoring in mechanical engineering, he relished the opportunity to take any course that interested him. And at Duke, many did.

“Whether the creative side of me or the engineer side of me, I craved all the disciplines.” He remembers selecting and being fascinated by a course in cognitive psychology: “The more random class I could take, the better.” And he took an introduction to acting class with Jeffery West, who encouraged Cornwell to audition for the fall show, “Arcadia.”

Cornwell made a mistake: He declined the offer.

“I used the excuse that engineering was going to take far too much time with classes and homework, so I wouldn’t be able to do it,” he remembers with regret. “But there was also the fear that I would be such an outsider, and honestly, I hadn’t really done anything at that level before.”

He graduated still unsure about which career direction to take. And so he did what many students before and since have done: He enrolled in a master’s program, to study acoustics at Georgia Tech.

That degree would eventually be his ticket to two years with an architectural consulting firm. And while at Georgia Tech, he overcame his fears and auditioned for parts in plays being produced on campus. He got those parts, and performing was as wonderful as he had imagined all those years before.

“Hilariously enough, Georgia Tech has a really good theater, although they don’t have a theater program,” he says. “But the theater that they run is one of the longest running theaters in Atlanta. We put on some really good productions, and that really exposed me to doing some theater at the next level.”

It also led him to join The Professional Actors Studio in Atlanta, which helps actors learn and master the disciplines that can make them better through ongoing classes, “like joining a gym.” During a performance showcase with the studio, a talent agent signed him, and “that was when the snowball started rolling down the hill,” Cornwell remembers. Cornwell quit his consulting gig and accepted an offer to begin teaching at the studio, a role he still holds today more than a decade later. He is earning his living as an actor.

Cornwell has landed several recurring roles in TV dramas and sitcoms, including “The Gates,” “Nashville” and “Reed Between the Lines.” He’s hoping to build on that momentum and become a starring cast member in a series. In the meantime, he and his wife, Brooke Jaye Taylor, whom he met on the set of a Longhorn Steakhouse commercial, have launched a Web series called Becky & Barry (watch at beckyandbarry.com) about two actors and the trials and tribulations of show business.

And whenever he acts in stage productions, he notices that his engineering expertise is never far beneath the surface.

“If I’m in a space that is acoustically horrible, it definitely haunts me all that could be done to make the space better,” he says. “Everything from what seats they’ve installed, how they shaped the walls, the audiovisual systems, and whether they’ve carefully chosen building systems to make sure they were quiet. That’s definitely where the education comes back to help me or haunt me.”

He pauses and laughs at himself. “But it was really helpful in setting up a home studio.”