Confirming a theoretical model required blasting a sample at 3,000 degrees with neutrons 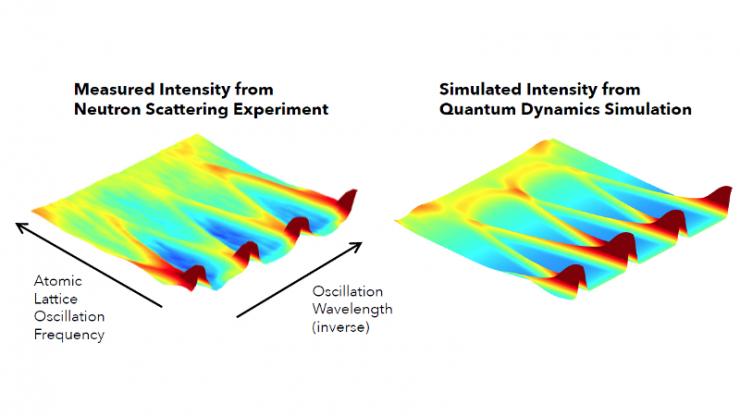 By ricocheting neutrons off the atoms of yttrium manganite (YMnO3) heated to 3,000 degrees Fahrenheit, researchers have discovered the atomic mechanisms that give the unusual material its rare electromagnetic properties. The discovery could help scientists develop new materials with similar properties for novel computing devices and micro-actuators.

The experiment was conducted as a collaboration between Duke University and Oak Ridge National Laboratory (ORNL) and appeared online in Nature Communications on January 2, 2018.

Ferromagnetism is the scientific term for the phenomenon responsible for permanent magnets like iron. Such materials exist because their molecular structure consists of tiny magnetic patches that all point in the same direction. Each patch, or domain, is said to have a magnetic dipole moment, with a north and a south pole, which, added together, produce the magnetic fields so often seen at work on refrigerator doors.

Ferroelectricity is a similar property, but more rare and difficult to conceptualize. In much the same way as a permanent magnet, a ferroelectric material consists of domains with electric dipole moments aligned with one another. This produces a naturally occurring permanent electric field, like a collection of microscopic balloons with a long-lasting charge of static electricity.

Yttrium manganite is one of the very few materials that combine both the ferroelectric property and also magnetic ordering at extremely cold temperatures. This rare combination presents the interesting possibility of controlling the material’s magnetic properties with electricity and vice versa. Harnessing this ability could let scientists create more efficient computers based on four digit-states rather than just today’s 1s and 0s by flipping both electrical and magnetic states, as well as new types of sensors and energy converters.

“These so-called multi-ferroic materials are very rare,” said Olivier Delaire, associate professor of mechanical engineering and materials science and of physics at Duke. “But if we can understand the mechanisms of what is happening at the atomic level, we have a better chance of designing and discovering more materials enabling new technologies.”

Because the ferroelectric behavior of yttrium manganite only turns off above 3000 degrees Fahrenheit, researchers have never been able to probe the atomic vibration waves that yield the desired arrangement of microscopic electric dipoles. While the molecular underpinnings of yttrium manganite’s ferroelectric properties have been theorized, there have never been direct measurements to prove them.

“This material was never previously understood on such a fine atomistic level. Our experimental results will allow researchers to refine theories and create better models of these materials so that we can design even better ones in the future.”

To determine how the property arises, researchers must probe the wave-like vibrations of the stacking of atoms in the material, which oscillate at frequencies over a thousand billion times per second. They also must do this both above and below the 3000 degree ferroelectric switching temperature, which is a tall task, to say the least. But that’s precisely what the researchers did.

“It was challenging to measure the atomic oscillations above 3000 Fahrenheit,” said Dipanshu Bansal, a postdoctoral scholar in the Delaire research group at Duke and the lead author on the study. “It required high-intensity neutron beams, special high-temperature materials and a controlled atmosphere furnace heating the sample in the air to avoid decomposing the sample, which would otherwise happen in a more standard vacuum furnace.”

The experiments involved shooting the extremely hot sample of yttrium manganite with neutrons. By detecting where the neutrons ended up after colliding with the sample’s atoms, the researchers could determine where the atoms were and how they were collectively oscillating. There are very few places in the world that have such capabilities, and the Oak Ridge National Laboratory, a few hours’ drive from Duke, happens to host both the High-Flux Isotope Reactor and the Spallation Neutron Source, the most powerful source of neutron beams in the world.

The researchers probed the material using neutrons at various energies and wavelengths, giving an overall picture of its atomic behaviors. They found that above the transition temperature, a certain group of atoms were free to move around and vibrated together in a particular way. But as the material cooled and shifted phases, those atoms froze into the permanent crystalline arrangement that is responsible for the ferroelectric properties.

And to confirm the neutron results, the researchers also used the ultra-bright X-ray beams at the Advanced Photon Source at Argonne National Laboratory and performed large-scale quantum simulations of atomic behavior with the supercomputers of the National Energy Research Scientific Computing Center at Lawrence Berkeley National Laboratory.

“This material was never previously understood on such a fine atomistic level,” said Bansal and Delaire. “We’ve had theories about the importance of atomic oscillations, but this is the first time we’ve directly confirmed them. Our experimental results will allow researchers to refine theories and create better models of these materials so that we can design even better ones in the future.”