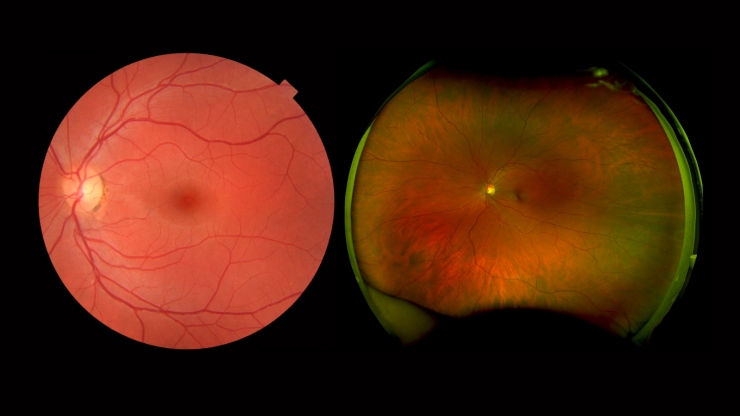 Hafeez Dhalla, assistant research professor of biomedical engineering at Duke, is no stranger to Harrington Engineering Quadrangle, or to its reputation for innovation in health care. After graduating with his bachelor’s in biomedical engineering, Dhalla stayed at Duke to pursue his PhD while helping Joe Izatt, the Michael J. Fitzpatrick Distinguished Professor of Engineering, develop a surgical microscope with built-in optical coherence tomography (OCT) capabilities. After several years working in industry, he returned to campus on a new mission—leverage Duke’s capabilities and resources to develop low-cost scanning laser ophthalmoscopes (SLOs) to combat diabetic retinopathy.

You’re career thus far has focused on two different eye imaging technologies, OCT and SLO. What’s the difference between them?

OCT, or optical coherence tomography, produces slices of image data that can be stacked to produce a 3D representation of the tissue of interest. In the context of retinal imaging, it produces cross-sectional views of the retina that allow the ophthalmologist to readily visualize subsurface features of the retina that are much more difficult to visualize in two-dimensional en face, or top-down views.

SLO, or scanning laser ophthalmoscopy, is one of these en face imaging technologies. It does not provide tomographic slices or depth information, but rather produces a surface view of the retina.  Thus, it primarily competes with fundus photography—which is basically just taking a color photograph of the retina—rather than OCT.

But from a technological standpoint, OCT and SLO are very similar. Both involve scanning a focused spot of light along the retina and collecting light that is backscattered. And while the light sources and light detectors are quite different, the scanning optics and patient interface are virtually identical.

What are the advantages between the two?

The advantages that SLO and fundus photography have over OCT is that they typically are implemented using visible wavelengths (red, green and blue) rather than in the near-infrared. This gives them an additional dimension of spectroscopic (color) information that can be important in identifying retinal features that are associated with disease. These are particularly important as they can be early markers of blinding diseases like diabetic retinopathy and age-related macular degeneration.

Thus, while OCT, SLO and fundus photography can all be used for diagnosing retinal disease, each technology has its own niche. While OCT has become the standard of care in the ophthalmologists’ office, SLO has seen less adoption. This is primarily due to competition from fundus photography, which has existed for much longer and was the standard of care in retinal imaging before OCT.  And even in the post-OCT ophthalmology world, fundus photography still has a place due to its spectroscopic information and relatively low cost.

What’s stopping SLO from being adopted as widely as OCT?

Between SLO and fundus photography, SLO is clearly the superior technology in terms of performance, offering high resolution, wider fields of view, better contrast, fewer image artifacts and superior ease of use. However, SLO products are currently considerably more expensive than their fundus photography counterparts. Particularly in price-sensitive markets such as screening programs and optometry offices, fundus photography is generally thought to be sufficient for referrals to ophthalmologists, where OCT is readily available, at least in the USA.

One of my research projects is to leverage emerging technologies to produce a lower cost SLO device that can unlock all of this technology’s inherent benefits over fundus photography while still being competitive with fundus photography on a cost basis. In particular, there is plenty of data to support that screening programs for diabetic retinopathy (DR), which typically employ low-cost fundus cameras, often miss early cases of DR due to image artifacts and poor usability. If we can replace those low-cost fundus cameras with low-cost SLOs, we can greatly improve the screening accuracy of these DR screening programs that are vital to preventing blindness.

How can new, low-cost SLO devices help in this effort?

Diabetic retinopathy is a complication of diabetes, and the leading cause of blindness in working-age adults. It is a growing problem as diabetes becomes more prevalent. Fortunately, it is highly treatable if detected early, but detecting it early enough for treatment to work depends on compliance with annual eye exams or screenings.

To combat poor compliance rates with eye exams, health systems often employ telemedicine screening programs where fundus photographs are acquired by technicians—often in PCP offices, community clinics and even in patient homes—and then read by a remote ophthalmologist. While somewhat effective, most of these programs use handheld fundus cameras, which, frankly, are not very good, though they are quite cheap. Their poor performance results in a huge fraction of these imaging sessions ending with inconclusive results.

A low-cost, portable SLO device would be a huge improvement over the handheld fundus cameras, as it is inherently robust against the glare and artifacts that render so many fundus photos ungradable. Creating an SLO device that is portable and cheap is a technological challenge, but one that I believe is surmountable by leveraging economies of scale and emerging technologies such as MEMS and 3D printing. Over the past couple of years, we have developed a cost-scalable, portable SLO device, and are just waiting for the pandemic to get under some semblance of control before we can evaluate its performance in clinical settings.

Why did you come to Duke to pursue this work?

I was an undergraduate BME major at Duke, and it was in my senior capstone biophotonics design course that I was first introduced to both OCT and Professor Izatt. I enjoyed and excelled in the course, and after its conclusion, Professor Izatt asked if I would be interested in joining his group as a graduate student. While I considered other BME PhD programs, I had developed deep ties to the Triangle over my four undergraduate years. Staying in Durham, and pursuing a PhD in a field I was interested in, was the natural choice.

After completing a joint post-doc at MIT and OHSU under Jim Fujimoto and David Huang, respectively, the inventors of OCT, I returned to Durham and joined Professor Izatt’s startup company, Bioptigen. There, I helped develop a device where an OCT imaging system is integrated into a surgical microscope to provide real-time cross-sectional imaging and guidance during ophthalmic microsurgery. This work exposed me to how real-world considerations affect medical device development, in particular, understanding clinical use cases and workflows, gaining regulatory approval and navigating new product introduction. After Leica Microsystems acquired Bioptigen, I was recruited away to Volk Optical in Cleveland, Ohio to manage the strategy of their portfolio of ophthalmic devices.  Through those roles, I learned a great deal about how the commercial side of the medical devices world works, and, importantly, gained a lot of experience working with end-users and regulatory bodies. But ultimately, I missed the intellectual freedom of academic research, and so when the opportunity to come back to Duke presented itself, I jumped on it.

What do you think the biggest developments in your field will be over the next five to 10 years?

As with most fields, artificial intelligence and deep learning will likely be major drivers of new technologies in the ophthalmic imaging field in the next decade. The revolution has already begun with the recent FDA clearance of AI algorithms that can diagnose diabetic retinopathy from a fundus photo. These technologies are still relatively young, and only work under very well controlled conditions, but it is likely only a matter of time before all types of medical images will be able to be read and graded by AI algorithms, as opposed to physicians. This will have dramatic implications for telemedicine in general, and imaging-based diagnostic screening in particular.