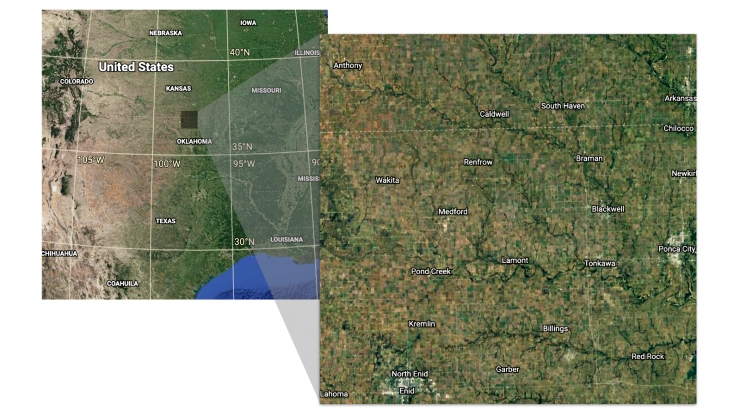 By leveraging a popular weather forecasting model, environmental engineers at Duke University have demonstrated that sharp contrasts in relatively small land features play an outsized role in local weather developments, which can in turn influence larger climate trends. The study indicates that the addition of such detailed data, which is currently overlooked in climate and weather forecast models, should make such predictions more accurate.

“Our research illustrates that landscape heterogeneity, such as croplands next to a city, or a lake next to a forest, can lead to more powerful thunderstorms,” said Nathaniel Chaney, assistant professor of civil and environmental engineering at Duke.

“What makes this important is that the scale at which these patterns happen is smaller than what we can include in current global models,” added Jason Simon, a postdoctoral associate working in Chaney’s laboratory and first author of the paper.

Whether making long-term global climate predictions or short-term weather predictions, climatologists and meteorologists turn to a handful of global models (e.g., the United States uses the Global Forecasting System). One of the limitations of these models is the scale at which they make their calculations. To avoid months of simulation runtime, these models split the Earth’s surface into boxes measuring between 10 to 100 kilometers (62.1 miles) per side. Variables such as temperature, wind speed and moisture are directly calculated at each node where the corners of these boxes meet but are interpolated or averaged for all the space between them.

“That’s a large distance between points, in which there’s plenty of patterns causing changes on their own,” Simon said. “It’s a whole aspect of weather that’s being missed. And if it involves clouds, then it’s going to have a large impact on the energy balance in relation to climate change on a global scale.”

In their study, Chaney and Simon used a higher-resolution weather model, the Weather and Research Forecasting model (WRF) to see what effect sharply defined changes in soil moisture at a 100-meter spatial resolution have on cloud formation. They focused on a 100-kilometer box over north-central Oklahoma on three summer days, considering landscape patterns where small lakes and rivers lay next to forests or thunderstorm-drenched plains, for example. Acquiring actual ground data from specific days ensured that the small-scale features they used were accurate representations of the real world.

After running the simulations, the results showed that sharp differences in landscape at these scales can have a disproportionately large effect on the formation of clouds. For example, a drier, hotter area next to a cooler, moister area — like an area where plains and city meet — will create surface atmospheric pressure differences between the dry and moist regions that triggers secondary circulations in the atmosphere. These circulations, in turn, lead to the enhanced formation of clouds.

While this is not the first study to reveal these sorts of dynamics, it is the first that uses realistic land surface data versus statistically simulated spatial patterns that may or may not reflect reality. It is also novel in its spatial resolution, which was shaved down to just 100 meters in the Weather and Research Forecasting model.

Chaney and Simon say that it would take a lot of work to get global models like the Global Forecasting System to be able to run simulations with this scale of land surface data included. But according to their new results, it could be possible if researchers adopted the tricks used by Chaney’s group to simulate high-resolution landscape spatial patterns.

“Whether it’s a multi-year global climate model or a local daily forecast, incorporating this level of detail would improve their accuracy,” Simon said.

“In the summer months — especially in North Carolina — we don’t know if it’s going to storm until it’s almost raining on us,” added Chaney. “Using this approach in a forecasting model could help us know several hours in advance.”