Chakrabarty is a professor of electrical and computer engineering at Duke 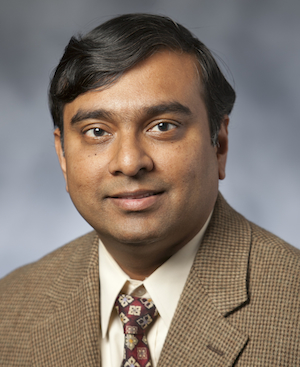 Krishnendu Chakrabarty, professor of electrical and computer engineering at Pratt, was named a fellow of the Association for Computing Machinery today. Along with 49 of his peers from around the world, Chakrabarty was recognized for his contributions to computing that are driving innovations across multiple domains and disciplines.

Specifically, Chakrabarty was cited for his work developing optimization methods for system-on-chip test automation, microfluidic biochips and sensor network infrastructure. The group will be recognized at the the 2013 Fellows at its annual Awards Banquet on June 21, 2014, in San Francisco.

It is Chakrabarty's second honor in as many months, as in November he was elected to receive the Humboldt Research Award, granted by the Alexander von Humboldt Foundation to "outstanding researchers whose fundamental discoveries, new theories, or insights have had a significant impact on their own discipline and who are expected to continue producing cutting-edge achievements in the future."