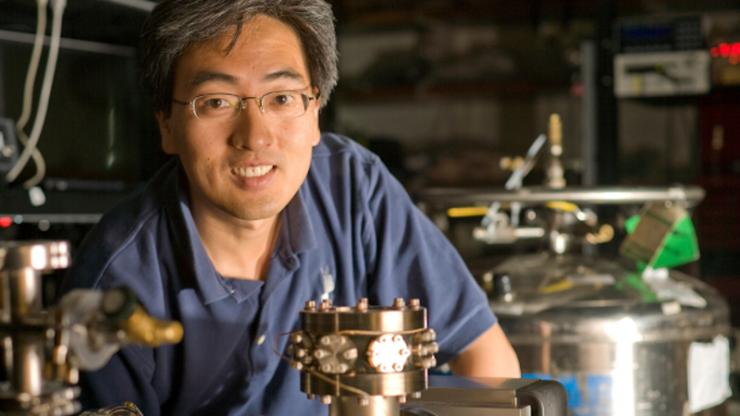 Jungsang Kim, professor of electrical and computer engineering at Duke University, has been named a Fellow of The Optical Society of America. Kim was cited for “research on scalable modular quantum computers and networks using trapped ions, large-scale optical switches, quantum optics with single-photon sources and detectors, and gigapixel-scale cameras.”

Kim has spent the past decade at Duke working to translate advances in controlling the quantum states of individual atoms into scalable, reproducible components for a quantum computer. Quantum computers ditch the traditional binary bits of information for “qubits” that can occupy many different states at the same time. This gives quantum computers the ability to solve types of problems that would take traditional computer years to solve, if they could solve them at all. The qubits in Kim’s quantum computer are individually trapped ions—atoms with electrons stripped away to give it a positive electric charge. That charge allows researchers to suspend the atoms using an electromagnetic field in an ultra-high vacuum environment. Kim and his colleagues then use precise lasers to manipulate their quantum states. Kim and colleague Christopher Monroe at the University of Maryland have secured more than $60 million in grants to transition these ideas into large, scalable quantum computers.

At Duke, Kim has also collaborated with David Brady, the Michael J. Fitzpatrick Professor of Photonics, to construct gigapixel-scale cameras. Prior to coming to Duke, Kim led a team of engineers at Bell Labs to realize the world’s largest all-optical switch based on micro-electromechanical systems (MEMS) mirror technology.

Fellows of The Optical Society are nominated by their peers as members of the society who have served with distinction in the advancement of optics and photonics. Founded in 1916, The Optical Society is the leading professional organization for scientists, engineers, students and business leaders who fuel discoveries, shape real-life applications and accelerate achievements in the science of light.