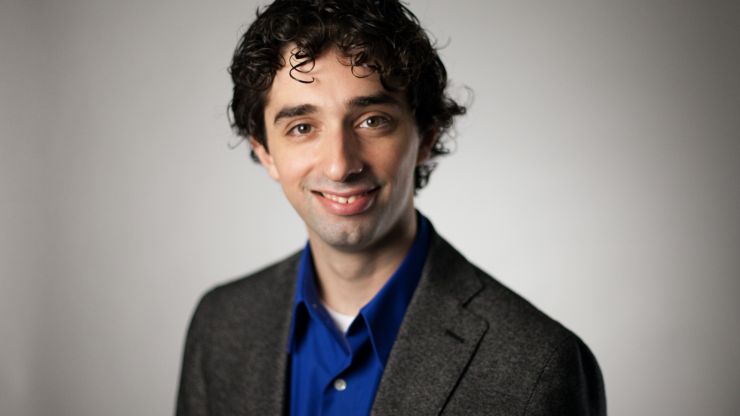 Jonathan Viventi, an assistant professor in Duke University’s Department of Biomedical Engineering, has been awarded multiple grants from the National Institutes of Health and the Department of Defense, totaling more than $7 million in funding. These grants will support Viventi and his team as they develop and optimize flexible brain interfaces for multiple uses.

Traditionally when researchers study brain activity or neurological disorders, they use electrodes that are individually wired to a separate, far-away recording device. The sheer amount of wiring in a constrained space means that researchers can only use about 100 electrodes, so they’re often required to choose between obtaining a high-resolution reading by focusing on a small area of the brain or collecting low-resolution readings over a large area of the brain.

But Viventi has sidestepped this limitation by designing thin, flexible electrode arrays that require a fraction of the wiring and dramatically increase the number of sensors available for use.

In three new projects, Viventi and his team will explore how they can further optimize these tools for improved uses in neuroscience research, for a wireless speech prosthetic, and in post-traumatic epilepsy.

In the first NIH project, called Neuro-CROWN, Viventi and his collaborator Dr. Hui Fang at Dartmouth College’s Thayer School of Engineering, are developing flexible, three-dimensional electrode arrays that will enable neuroscientists to sample brain activity with improved coverage and resolution. The team will receive $3 million over four years to advance the project.

While Viventi’s prior electrode arrays are flat, two-dimensional, flexible shapes that can be placed on the brain, the team developed an entirely new electrode array using an ultra-flexible neural interface dubbed the Neuro-CROWN (CMOS-based, rollable, low-noise neuroelectronics). The electrodes, multiplexing electronics, and wiring for the Neuro-CROWN device will be fabricated in a flexible form factor, and then rolled into a tight, small cylinder with shanks at one end. Thousands of sensors will be placed along these shanks, which can then be easily inserted into targeted areas throughout the brain so researchers can collect a variety of brain measurements.

“There are existing tools where you can have hundreds of electrodes along a single penetrating shank so you can collect information at different depths within the brain, but you can’t see what else is going on across the brain,” says Viventi. “Other arrays are like a bed of nails, where they cover a wider brain region, but the electrodes only reach one depth within the brain. Our effort will combine both together to have simultaneous recordings at multiple depths, from multiple locations throughout the brain.”

According to Viventi, this new array could house more than 2,000 sensors and use fewer than 20 external wire connections. The limited use of wires would help make it an ideal array for long-term experiments to study the behavior of freely behaving animals.

“This project will be useful for BRAIN Initiative Investigators and the broader neuroscience community as they perform very large-scale recordings in animal models,” says Viventi. “We’re optimistic that the technology that we develop in this project can also be rapidly translated to humans in the future.”

In their second NIH project, which is supported by an R01 grant and provides the team with $3.8 million in funding for five years, Viventi and his team will develop and optimize wireless electrode arrays that can be used for speech neural prostheses.

Patients who suffer from neuromuscular diseases such as locked-in syndrome, amyotrophic lateral sclerosis (ALS) or muscular dystrophy have difficulty communicating through speech, which negatively impacts their quality of life. The most common speech aids for these disorders can track a patient’s eye movement to spell and read out words, but these signals and spellers are often slow and inconsistent. Researchers have long explored how they can use neural prostheses to translate brain signals into speech, but these efforts have faced numerous technological limitations.

“Our goal is to develop a speech prosthetic where a patient could imagine saying words, and the computer can produce a voice for them,” says Viventi. “Previous teams have shown that this is possible with just 128 individually wired electrodes, but our goal is to develop an array with 1000s of electrodes that are fully implanted and wireless. This would allow for higher performance decoding and would also support natural language speech that is both faster and more efficient.”

To accomplish this, Viventi has been working with Dr. Gregory Cogan, an assistant professor in the Department of Neurosurgery at the Duke University School of Medicine, to study speech patterns and the speech areas of the brain during surgery. They’ve already shown that early prototypes of their electrode arrays can quickly and efficiently decode speech signals after just 10 minutes of recording.

“Our focus is on developing the electrode arrays and the recording system, while Greg’s lab will develop the decoding algorithms that translate the electrical signals into speech,” explains Viventi. “These arrays include their own electronic components, so they can be packaged and sealed up without requiring any external wiring.”

“We are grateful for the partnership with Dr. Viventi and Duke University in our efforts to develop devices that help people who have lost function and so urgently need new solutions,” says Dr. Florian Solzbacher, co-founder and Chairman of Blackrock Neurotech. “Further, this new technology platform has the potential to revolutionize how smart implants are designed, manufactured and tested. It fits perfectly into Blackrock’s strategic technology portfolio, which we are building to increase options for future neural interface products that leapfrog existing technologies.”

In their final project, which is supported by the US Department of Defense and provides $715,000 over three years, Viventi and his collaborators will develop a wireless electrode array that can help researchers and physicians diagnose and manage epilepsy disorders caused by traumatic brain injury (TBI).

TBI affects more than 2.8 million people a year, and it is especially common among veterans. One of the main consequences of a traumatic brain injury is posttraumatic epilepsy. So far, researchers have been unable to pinpoint what brain signals trigger epilepsy, and it’s difficult to predict if and when patients will develop epilepsy, as they can have their first seizure more than a year after their TBI.

“We have developed wireless and implantable arrays that would enable long-term brain recordings for patients with TBI who are at an increased likelihood of developing epilepsy,” explains Viventi. “This tool would give physicians and researchers unprecedented access to human electrophysiological data, and it would ideally help them gain a better understanding of how and why epilepsy develops in these patients.”

According to Viventi, these electrode arrays would be sensitive enough to allow physicians to localize the neural circuits that trigger their seizures, and they could provide data that would guide surgical interventions. Because these arrays are also self-contained and wireless, they could be left in the brain for up to a year, limiting any complications, such as infections, from external wire connections.

“These wireless arrays would allow patients to live their lives at home rather than be confined to a hospital bed for a month,” says Viventi. “By tracking long-term data, we can learn more about when we need to intervene to prescribe medication or surgery, and we can learn how to treat epilepsy more effectively overall.”