Jennifer West, the Fitzpatrick Family University Professor of Engineering with appointments in the Departments of Biomedical Engineering, Mechanical Engineering and Materials Science, Cell Biology, and Chemistry, has been awarded the 2015 Clemson Award for Basic Research from the Society for Biomaterials. 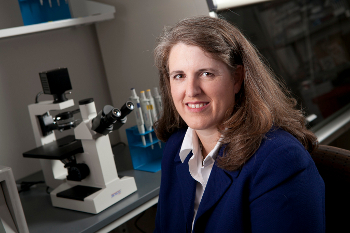 The award for basic research recognizes outstanding contributions to the basic knowledge and understanding of the interaction of materials with tissue, focusing on theoretical concepts, developing new materials or studying the interactions of a bacterial in a biological environment.

West was cited for “her significant utilization and application of basic knowledge in science to accomplish a significant goal in the biomaterials field.” If this sounds like a broad citation, perhaps that is because West has made important contributions to a wide variety of biomedical fields. A few of her research pursuits include using gold nanoparticles to battle cancer, creating patterned surfaces to control the physical interactions of cultured cells, and engineering biomimetic hydrogels that approximate soft tissues in the body, making them idea substrates for many cell and tissue applications.

“Dr. West has not only defeated the impossible; she has made a significant impact in healthcare management through innovative biomaterials technology,” said Martine LaBerge, PhD, who nominated West for the award, in a Society for Biomaterials news release. “In the past 19 years, she has passed the torch to more than forty PhD graduates and post-doctoral fellows in addition to hundreds of undergraduate students.”

“This is the fourth Clemson Award for Duke’s Department of Biomedical Engineering in the past five years,” said West. “This demonstrates the depth of excellence in biomaterials research here in Pratt.”