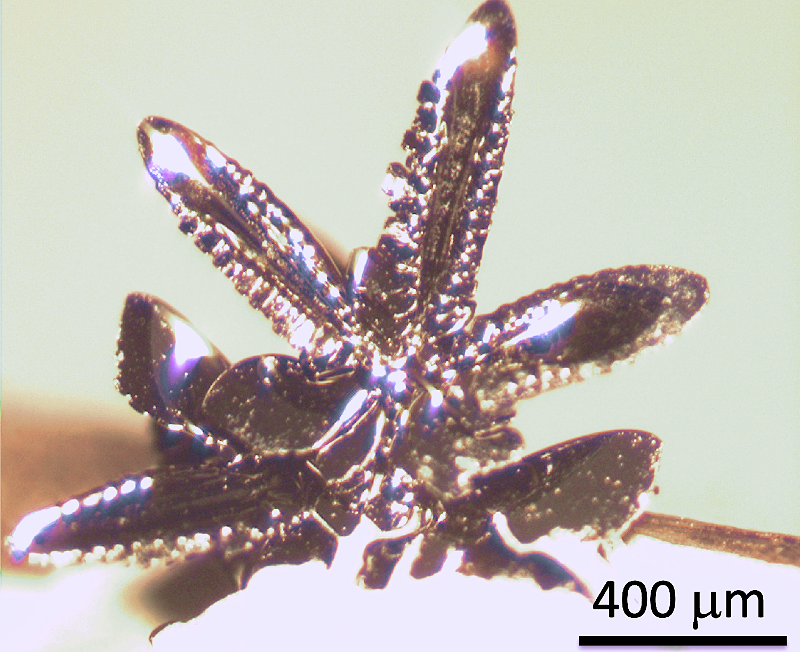 Materials scientists at Duke University have shown the first clear example that a material’s transition into a magnet can control instabilities in its crystalline structure that cause it to change from a conductor to an insulator.

If researchers can learn to control this unique connection between physical properties identified in hexagonal iron sulfide, it could enable new technologies such as spintronic computing. The results appear April 13 in the journal Nature Physics.

Commonly known as troilite, hexagonal iron sulfide can be found natively on Earth but is more abundant in meteorites, particularly those originating from the Moon and Mars. Rarely encountered in the Earth’s crust, most troilite on Earth is believed to have originated from space.

Despite its relative rarity, troilite has been studied since 1862 without much fanfare. A recent theoretical paper, however, suggested that there might be novel physics at play between the temperatures of 289 and 602 degrees Fahrenheit—the temperature range at which troilite becomes both magnetic and an insulator.

“The paper theorized that the way the atoms shift in their crystalline structure is impacting the mineral’s properties through a pretty complicated effect that hasn’t been seen before,” said Olivier Delaire, associate professor of mechanical engineering and materials science, physics and chemistry at Duke. “The most important aspect is this interaction between magnetic properties and atomic dynamics, which is a subject that has not been investigated a lot before but is opening up new possibilities in computing technologies.”

To get to the heart of the material’s odd behavior, Delaire and his colleagues turned to Haidong Zhou, assistant professor of experimental condensed matter physics at the University of Tennessee, for the difficult task of growing perfect crystals of troilite. The researchers then took samples to Oak Ridge National Laboratory and Argonne National Laboratory to blast them with neutrons and x-rays, respectively.

When particles such as neutrons or x-rays bounce off the atoms inside a material, researchers can take this scattering information to reconstruct its atomic structure and dynamics. Because neutrons have their own internal magnetic moment, they can also reveal the direction of each atom’s magnetic spin. But because neutrons interact weakly with atoms, x-rays are also very handy for resolving a material’s atomic structure and atomic vibrations in tiny crystals. The researchers compared results from the two different scans using quantum mechanical models created on a supercomputer at Lawrence Berkeley National Laboratory to make sure they understood what was happening.

“This is the first clear example that the alignment of magnetic spins can control the instabilities of a material’s crystal structure. This is the type of material that’s exciting in terms of enabling new types of devices.”

After watching the changes that occur through troilite’s phase transformations, the researchers discovered previously unseen mechanisms at work. At high temperatures, the magnetic spins of troilite atoms point in random directions, making the material non-magnetic. But once the temperature drops below 602 degrees Fahrenheit, the magnetic moments naturally align and a magnet is born.

The alignment of those magnetic spins shifts the vibration dynamics of the atoms. That shift causes the entire crystalline atomic structure to deform slightly, which in turn creates a band gap that electrons cannot jump across. This causes the troilite to lose its ability to conduct electricity.

“This is the first clear example that the alignment of magnetic spins can control the instabilities of a material’s crystal structure,” said Delaire. “And because these instabilities lead to a connection between the crystal’s magnetic and conductivity properties, this is the type of material that’s exciting in terms of enabling new types of devices.”

The ability to tune a material’s magnetic state by applying electrical currents, and vice versa, would be essential for the realization of technologies such as spin electronics, Delaire said. Known as spintronics for short, this emerging field seeks to use an electron’s intrinsic spin and associated magnetic moment to store and manipulate data. Combined with an electron’s traditional role in computing, this would allow computer processors to become denser and more efficient.

Through this paper, Delaire and his colleagues have identified the magnetic controls of the distortion mechanisms of the crystal structure, giving researchers a handle to manipulate one with the other. While that handle is currently based in temperature changes, the next step for researchers is to look at applying external magnetic fields to see how they might affect the material’s atomic dynamics.

Whether or not troilite becomes the new silicon for the next generation of computing technology, Delaire says finding this unique mechanism in such a well-known material is a good lesson for the entire field.

“It’s surprising that, even though you have a compound that is relatively simple, you can have this fancy mechanism that could end up enabling new technologies,” said Delaire. “In a sense, it’s a wakeup call that we need to reconsider some of the simpler materials to look for similar effects elsewhere.”