Duke engineers are working with NASA scientists to develop an inflatable heat shield to decelerate spacecraft entering the Earth’s atmosphere—and prepare for a manned mission to Mars.

*Crackle* "Houston, this is Mars One. We are at the insertion point. Permission to enter the atmosphere and descend to the surface?" *Crackle*

"Mars One, this is Houston, copy. Permission granted to deploy the HIAD. Proceed as planned. Godspeed."

Thanks in part to the research of Benjamin Goldman, a fourth-year PhD candidate in Duke’s Department of Mechanical Engineering and Materials Science, this scenario may one day become a reality. As a NASA Pathways student trainee in the aeroelasticity branch at NASA’s Langley Research Center in Hampton, VA, he has been running an aeroelastic evaluation of the NASA Hypersonic Inflatable Aerodynamic Decelerator (HIAD) as his graduate research.

According to NASA, the HIAD is an “inflatable device to slow a spacecraft upon atmospheric re-entry to Earth or other planets.” In other words, it’s an inflatable braking system and heat shield that could help humans travel to Mars.

“The HIAD was developed to deliver larger and heavier payloads to the surface of Mars, which may eventually help bring people and infrastructure to the surface,” said Goldman. “The inflatable aeroshell is necessary because current rigid aeroshells are limited by the size of the rockets that launch them—thus limiting the payload size.”

One of the hardest parts of exploring our solar system is not the actual space travel, as most may think; it is the insertion of the spacecraft into the atmosphere. When a spacecraft hits an atmosphere, it is traveling at supersonic speeds through the extremely cold temperatures of space. The moment it enters the atmosphere, air molecules start to bombard the spacecraft, which acts as the spacecraft’s brakes but also causes its skin to heat up and expand. Because of this physical constraint, NASA has been searching for a way to pack a larger aeroshell into the tiny constraints of the launch vehicle shroud.

Because the larger the aeroshell, the better the brakes. 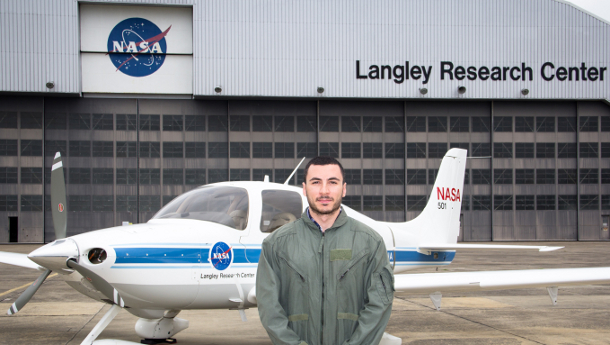 Over the past few decades, agency scientists have been investigating new ideas and methods to slow down spacecraft at the point of atmospheric insertion. Previously, NASA used thermal tiles for the Apollo and Space Shuttle missions (and also with the upcoming Orion missions). While these thermal tiles are efficient and work well, they are extremely costly and incredibly fragile. Scientists working on the new inflatable HIAD design hope it will be cheaper and more durable than the old thermal tiles and eventually replace them on most future space missions.

HIAD is the brainchild of Dr. Neil Cheatwood of NASA’s Atmospheric Flight and Entry Systems division at Langley Research Center. The HIAD project is part of the THOR (Terrestrial HIAD Orbital Re-Entry) vehicle, an equipment test that scientists are hoping to launch sometime next year.

According to Goldman, the Aeroelasticity group at Duke is “developing fluid-structure interaction models for the HIAD vehicle.” Goldman’s background as a physics undergrad and experience as a Navy contractor helped prepare him to work with the fluid dynamics, structures and numerical modeling needed for this project.

The design that the team came up with uses aerogels and woven fabrics as the HIAD’s Thermal Protection System (TPS). In the summer of 2013, Goldman and his NASA mentor, Robert C. Scott, performed physical testing of the materials in the TPS in NASA’s 8’ High Temperature Tunnel. Their goal was to make sure that the flexible materials used on the vehicle are stable in-flight.

The results showed that the stability of the HIAD will be affected by the pressure differences of both the static and dynamic flow. They also determined that aeroelastic flutter was present, meaning that more research would have to be done in order for the HIAD to remain stable during flight.

Goldman is currently working on modifying NASA’s FUN3D computational fluid dynamics code to solve the nonlinear structural dynamics of the aeroshell TPS material. The future looks promising for both Goldman and HIAD as HIAD is a part of NASA’s 2016 Budget Request. The current proposal calls for conducting a high-energy reentry test on a small-scale heat shield using existing flight hardware from a previous test. If successful, the results would verify the heat shield’s capabilities, helping near-term missions with the International Space Station and, perhaps someday, making human missions to Mars more affordable.

Stay tuned to the skies for the HIAD launch!

Caleigh MacPherson is a graduate student in the Master of Engineering Management Program at Duke with a bachelor’s and master’s degree in mechanical engineering from the University of New Hampshire, where she previously worked on the NASA Magnetospheric Multiscale satellite mission. In her spare time, she attends NASA launches as a social media journalist and she is a 2015 NASA Solar System Ambassador.