Hurricane season is fast approaching. Here’s what you should know about flooding, floodwater contaminants, and those baffling spaghetti models

Are hurricanes going to get worse?

Most projections say that our climate is on a trajectory that will continue to grow wetter and warmer. According to scientists at the National Center for Atmospheric Research, that suggests that future hurricanes could dump even more rain where they hit.

For many communities in North Carolina, still recovering from an onslaught of storms that made 2018 the wettest year on record, the start of another hurricane season on June 1 is disheartening.

How can these vulnerable areas prepare? How well can we estimate where flooding will occur the next time around? And why can't we make better predictions about where hurricanes will hit?

Experts in Duke University’s Civil and Environmental Engineering department answer some of these critical questions.

Q&A: Why Hurricanes are So Unpredictable

In this day and age, why can’t we accurately predict where a hurricane will make landfall, or how strong it will be?

There are basically two answers to this: the first is associated with our imperfect knowledge of the initial hurricane conditions, and the second is our imperfect hurricane models.

In predicting the path of a hurricane, you need to know information about, say, the initial humidity, temperature, wind speed and so on—and you can never know those perfectly, because measurements that come from instrumentation always have some kind of uncertainty associated with them.

However, weather systems like hurricanes are not at all like that, because they are chaotic. For a chaotic system, tiny errors in the initial conditions are amplified with time, so that your prediction for the long-term behavior of the system can be in enormous error, despite the fact that errors in your initial conditions were miniscule.

Since we can never know exactly what the initial conditions are for hurricanes, then even in principle it's impossible to perfectly predict the behavior of hurricanes, including their path and strength.

The second thing that makes hurricanes so difficult to predict is that they are incredibly complex and therefore very difficult to model. Hurricane models are very imperfect since they do not fully capture all of the complex physics associated with this kind of weather system. So even if we did know the initial conditions perfectly—which we don't—we still would not be able to perfectly predict hurricanes, because of imperfections in the models we have.

With every hurricane, forecasters show “spaghetti models” that show a number of projected paths. How are we supposed to interpret all of these possible outcomes?

You could also make an ensemble using a single set of initial conditions, but using a multiplicity of weather models.

The key point is that hurricanes are so complex that we can never make perfect, precise predictions, but using these ensemble predictions we can make meaningful and important probabilistic predictions. 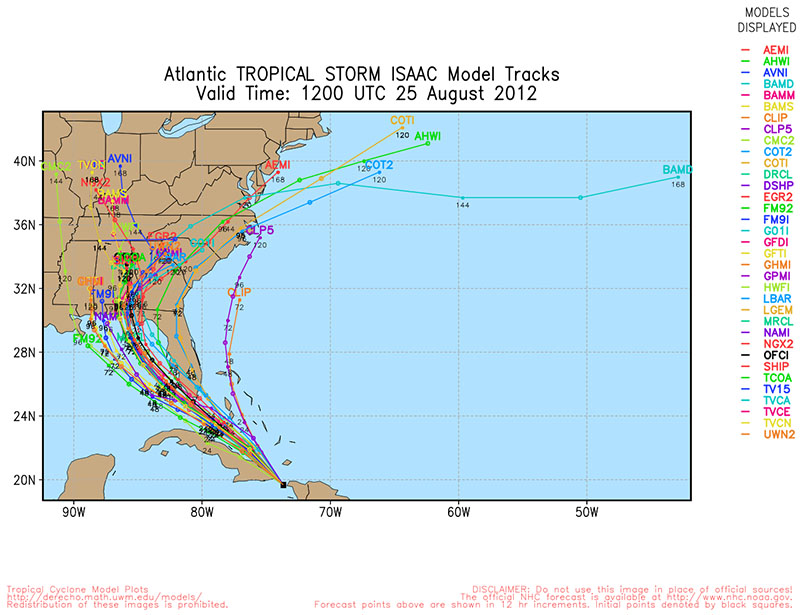 Can the models be engineered to improve accuracy?

Yes, one of the ways models can be engineered to improve accuracy is to improve the representation of the so-called "unresolved physics."

A typical weather model will be solved on a grid whose resolution is several kilometers, which is a million times larger than the scale at which some of the key hurricane processes take place. For example, one of the things that drives the behavior of hurricanes is the condensation of water vapor, and that's a process that takes place on a scale of micrometers and is affected by really complex phenomena such as small-scale air turbulence.

The small-scale processes that are not resolved in the simulation therefore have to be parameterized, and the parametrizations are, quite frankly, often very crude.

The more powerful the computer, the smaller the grid resolution you can use, and therefore the less reliant you are on these parameterizations. So, the development of computational resources is one of the things that will improve the degree to which hurricanes can be accurately modeled.

However, it's going to be a long time before computers are powerful enough for us to be able to resolve all of the physical processes governing hurricanes. As a result, improving the parametrizations in the models is crucial. A key point here is that in order to model something faithfully, you really have to first understand it, and the fact is that many of the key processes that happen on the small scales aren’t understood very well at all. For example, the air in the atmosphere is very turbulent at the small scales, and that can cause large fluctuations in the temperature of the air, which affects the rate at which these condensational processes take place. But that process is not very well understood, and the current model parametrizations used for it therefore may be very imprecise—we just don't know. This is one of the areas that my lab focuses on: understanding and modeling turbulent flows.

So, another way we can develop better improve the models is by understanding these fundamental, small-scale processes better, and that will then allow us to parameterize them more faithfully. And then the goal is that we can use these improved parameters in large-scale weather forecasting, with the end goal that we improve the predictions from the models.

Andrew Bragg is an assistant professor of civil & environmental engineering at Duke and runs the Duke Theoretical and Computational Fluid Dynamics Group, which works to better understand and model the motion of turbulent fluids in the environment.

Q&A: Why We Flood Inland, Too

It seemed that every time it rained here in Durham last fall, long after the hurricanes had passed, there was another flash flood warning. Why?

Overall, last year was very wet in Durham. What made matters worse was that Hurricane Florence thoroughly soaked the soils, setting the stage for what seemed to be the incessant storms that followed. Here in North Carolina, especially in the Piedmont, our soils are mostly clay, and water infiltrates at a much slower rate through clay than through sand. Basically, the soil doesn’t soak up water as well. The water runs into streams, the streams overflow their banks and rush into the floodplains, thus enhancing the flood risk. Add onto that the ever-increasing urbanization in the Triangle and the region’s high clay content soils and you had all the ingredients for the persistent flood risks that we faced.

Are urban areas more or less likely to flood?

In general, urbanization will increase the chances of flooding since paved areas are not nearly as effective at absorbing rainwater as soils are. As a result, it is much easier for the falling rain to make it into the stormwater drainage system and streams in a shorter time period, thus enhancing the flood risk. That being said, this is one of the reasons why flood control infrastructure such as retention ponds is built—since it helps slow down the release of rainwater into the streams and thus decreases flood risk. For example, in my own home, we have a rain garden that helps temporarily hold the water that runs off from our driveway, roof, and lawn into the local stream.

Is there a way to predict how badly different areas will flood?

Scientists use computer models to predict flooding, but the models rely on detailed maps that describe the types of soils in a given region, where the streams run, and where paved areas lie. Knowing that information is necessary for computer models to be able to take the predicted rainfall from weather models to help determine where flooding might occur. One of the areas of my research focuses on compiling all the different types of environmental data, such as soil, vegetation, and elevation—information that can be used for these computer models. And then I use machine learning algorithms and available satellite information to merge all these different data sources to provide the best possible spatial maps that describe the land characteristics—for example, the clay content in the soils. These data are necessary to predict where and when it is going to flood. 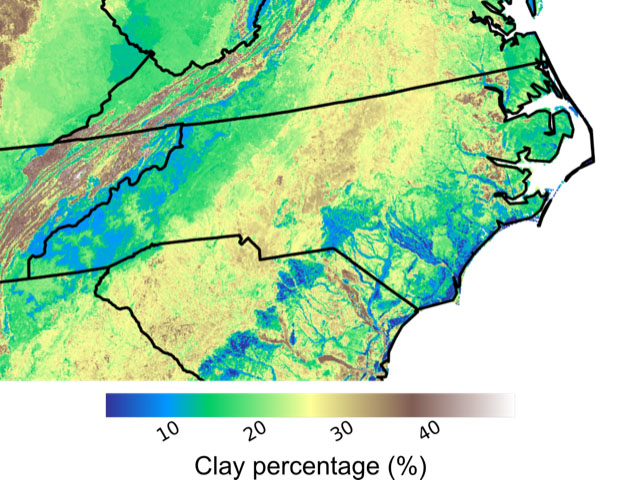 The soil at active or closed industrial sites can be contaminated with toxic metals or organic compounds that don’t degrade. When there’s a flooding event, like a hurricane, the water can pick up the contaminated soil and move it to other places, and then the contaminants leach out. Basically, flooding distributes pollution. It brings contaminants out of isolation, to places where they could be a danger to people and animals. Those contaminants can travel as far as the soil particles travel—so, as far as the floodwater goes.

When Hurricane Harvey came through Texas we saw this happen. There are a lot of petrochemical industries in that area of the country, and some closed sites are contaminated with chemicals, like hydrocarbons and other kinds of solvents, and metals, like chromium, mercury, or lead, that could be hazardous to people. 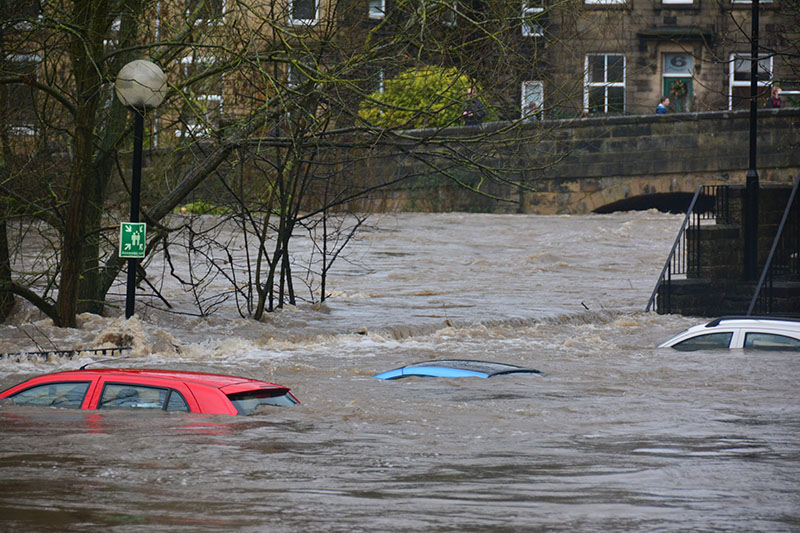 Boiling water can kill microbes and pathogens, but it can’t get rid of chemical contaminants, or make them less hazardous.

Won’t the floodwaters wash away the contaminants as they recede?

With a flooding event, everything is diluted. With the flooding that occurred with Florence last year, the water overtopped a coal ash dam and mixed coal ash into the surrounding environs. From what I remember of seeing some of the measurements taken, the contaminants associated with coal ash—let’s take arsenic, for example—was very really low in concentration because it was diluted by water. The problem is that the flooding brought all this coal ash out of the storage basin and into the environment, and we don’t know how much ash is now in an uncontrolled place, re-depositing and re-concentrating in other locations.

Over the long term, that is a problem because when the floodwaters recede, the volume of water goes away but the mass of the contaminant is still there. It becomes more concentrated.

In my lab, we have done a lot of work looking at coal ash storage ponds and release of contaminants, focusing on what chemical forms they take. For example, we ask what form of arsenic is in coal ash? The answer really matters because how much of the contaminant leaches off depends on the chemical form the arsenic takes. Some forms are more toxic than others.

What effects could these contaminants have?

The chemical exposure risks are not limited to people. They also create risks to wildlife. For example, coal ash contains a lot of selenium, and selenium is an ecotoxin. It isn’t as much of a problem for us, as humans, but it’s a teratogen for fish, meaning it causes embryos to be malformed. Selenium from coal ash ponds can affect fish populations in neighboring bodies of water—this has been known for decades. And when you disrupt a major component of the food web, you cause a lot of damage to the ecosystem. It takes a while for that ecosystem to recover.

Heileen Hsu-Kim is an environmental engineer who specializes in environmental aquatic chemistry and geochemistry. She is an expert on pollutant metals and the biogeochemical processes that alter their distribution in water, soil and air. She has performed extensive research on coal ash, studying its environmental impacts and developing techniques for rare earth metals extraction.

"When there’s a flooding event, like a hurricane, the water can pick up the contaminated soil and move it to other places, and then the contaminants leach out. Basically, flooding distributes pollution."