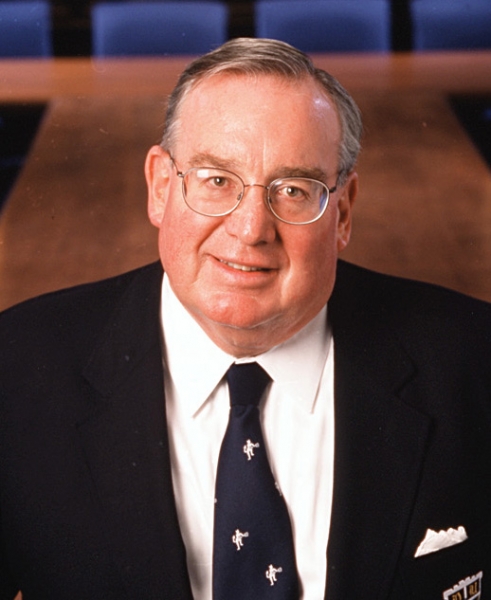 As a result of my time at Duke, I learned how to work with smart people and listen to what they had to say. That way, you get stimulated, you get stretched, and you get the job done well-with real team spirit.

In his hometown of Philadelphia, Harold "Spike" Yoh is a native son who made very good indeed. Fresh out of school, he joined Philadelphia-based Day & Zimmerman, Inc., one of the nation's largest technical services organizations, as director of his own subsidiary company, H.L. Yoh Company. Yoh was soon rising steadily through the ranks of the parent organization, becoming its chief executive officer in 1976 and chairman in 1980. By the time Yoh handed over control of Day & Zimmerman to his children in January 1999, the firm had grown 1,000 percent under his leadership. It now employs more than 24,000 personnel, comprises 25 subsidiaries, and performs $1.5 billion worth of professional services for clients in 45 states and 15 countries.

While technically retired, Yoh now stays extremely busy with his responsibilities as chairman of the Duke University Board of Trustees, as well as a full plate of charitable activities that have won him numerous awards and kudos within the Philadelphia area and on a national level. Yoh credits Duke in large part with helping him develop the philosophy that served him so well in business.

"One of our engineering professors gave us an open-book PhD-level exam in aerodynamics just to challenge us," he recalls. "None of us did well, but all of us learned an important lesson about the complexity of the discipline. As a result of my time at Duke, I learned how to work with smart people and listen to what they had to say. That way, you get stimulated, you get stretched, and you get the job done well – with real team spirit."

With a perspective informed by 45 years overseeing the development and marketing of a broad spectrum of technical services worldwide, Yoh is a compelling advocate for both the University and the Pratt School of Engineering.

"I see engineers taking the lead in our increasingly technological society-particularly those who have people skills," he says. "At Duke, you learn engineering within a strong liberal arts setting. That differentiates Duke's engineering program from most others-and is a real asset when it comes to being able to demonstrate a critical mass of talent to prospective corporate partners."

Even though he's reached what many would consider a pinnacle of achievement, Yoh is never content to rest on his laurels.

"I'm always happier when I'm making something better," he says. "And it's a very exciting time to be involved with the Pratt School of Engineering. The current strategic plan is designed to build on the momentum that will take it to the next level of excellence."