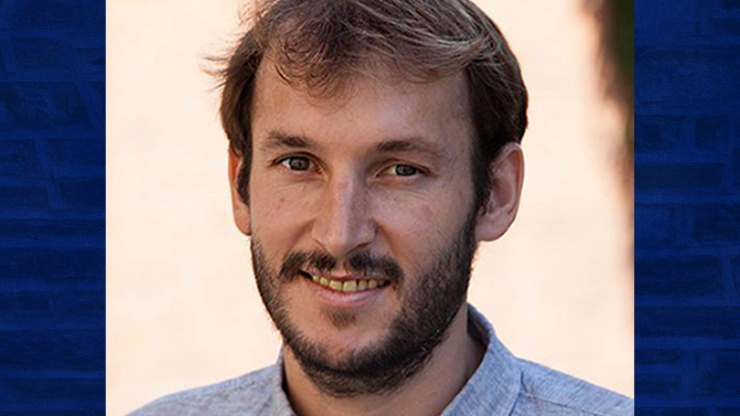 The original version of this story appeared on the Giving to Duke Health site.

One centimeter doesn’t seem very deep. But when you’re talking about shining light into the brain, it might as well be 20 leagues under the sea, Horstmeyer explains. Brain tissue scatters the light, obscuring the view.

“You can imagine putting a flashlight up to your hand then looking across the room,” he says. “The light is dim, you can’t crank up the light too much because otherwise it would damage the tissue.”

Horstmeyer has invented processes that enable him to control light deeper in brain tissue (a centimeter or two beneath the skull), and has turned this technology into a new, non-invasive device for mapping crucial areas of the brain.

The ultimate goal is to accurately map brain function with a test that is as simple and non-invasive as shining a light on the surface of the head.

Success could help improve outcomes for children with refractory epilepsy. Epilepsy affects about 470,000 children in the United States, and about one third of those don’t respond to medication and need surgery to provide relief from seizures.

Success of surgery depends on precise mapping of brain areas that control vital functions such as speech and movement. Currently, non-invasive mapping is performed through Functional magnetic resonance imaging (fMRI), which requires lying relatively still in a noisy machine for anywhere from 10 to 45 minutes while performing tasks such as filling in sentences or tapping fingers together.

But anyone who has young children (including Horstmeyer, who has 18-month old and 3-week old daughters at home) knows that it’s hard for them to sit still for very long.

If Horstmeyer’s portable, non-invasive device is just as accurate at measuring brain function as fMRI, it could enable children with epilepsy to undergo accurate surgical planning and have surgery at a much younger age, which would likely lead to better outcomes, he says.

The device uses a very sensitive optical sensor called a single photon avalanche diode array. One of these sensors answers a basic question in minute detail—has a photon of light arrived at one single point, or not?

Measuring single photons at one tiny point of light doesn’t tell you much, but measuring at thousands of points can, Horstmeyer says. These sensors have been around for a while, but only recently have manufacturers been making them in large arrays. “You can have thousands or millions of these detectors all in a little tiny chip,” he says. This array technology will soon be used in next-generation smartphones and tablets, and they are already being used in self-driving cars.

Horstmeyer’s innovation is putting such a chip into a small probe, configuring the sensors, and writing algorithms to process the data so that he can create images and eventually video showing how small changes in blood flow scatter light.

Horstmeyer’s team has tested the device in adults in the lab, and the results were promising. Now he will test it for the first time with children in the clinic, thanks to The Hartwell Foundation grant of $300,000 over three years.

The probe itself is as small as a flashlight, but it is connected to two boxes with fiber optic cables for sending and receiving signals and will be wheeled to the clinic on a cart, much like portable ultrasound machines.

Horstmeyer’s team will conduct tests of brain function with 16 children who are having pre-surgical evaluation for refractory epilepsy, using the new device as well as fMRI, to then compare with the resulting measurements.

The tests to validate the accuracy of his new device as well as refine the portable setup for real-world clinical conditions wouldn’t be possible without the Hartwell Grant, Horstmeyer says.

Collaborators Muhammad Zafar, MD, MBBS, Assistant Professor of Pediatrics, and Melanie Bonner, PhD, Child Clinical Psychologist and Professor in Psychiatry and Behavioral Sciences, will play a crucial role in providing their clinical expertise for the tests.

For each of the last 15 years, The Hartwell Foundation has provided financial support of innovative, early-stage biomedical research with the potential to benefit children of the United States.