Hacking into a Bionic Ear

These are questions familiar to anyone who has ever gotten a prescription for glasses or contact lenses. Even with new technology to automatically detect your prescription, clients usually end up behind one of those face-covering devices that look better suited for a futuristic steampunk horror flick.

Finding the best prescription that fits each individual’s eyes has been routine for decades. For individuals who need prescriptions for their ears, however, no such standardized set of rules exists.

Cochlear implants are surgically implanted electronic devices that gather sounds from the world and transmit them to the brain through electric signals. Over the past 30 years, these devices have been steadily improved, giving deaf individuals the gift of hearing—most can even use a telephone. There are many nuanced adjustments that can be made to a cochlear implant, however, and finding the best set of parameters for each person is tricky.

Vinay Nagaraj, a recently graduated mechanical engineer from Duke University, is attempting to fix this shortcoming of an otherwise transformative technology. By creating software that “hacks” a cochlear implant, Vinay is allowing people to adjust their own settings to maximize their auditory experience. The project has also helped Vinay in return by giving him valuable research experience and an internship opportunity that could help shape his career. 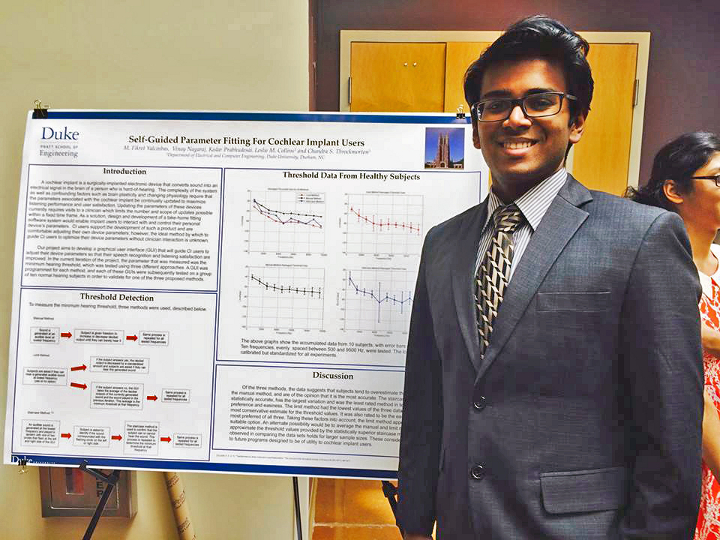 “Duke has this program called Bass Connections that funds projects formed between different departments, which is how I got started with cochlear implants,” said Vinay. “It’s a fantastic program for someone like me without much of a background in research. I got a lot of experience and got to work closely with graduate students and Professor Leslie Collins. I’d say it was my defining experience as an undergraduate at Duke.”

During his Bass Connections project, Vinay used a computer coding program called MATLAB to develop an interface that could adjust the minimum threshold and maximum comfort levels of a cochlear implant. That work went on for a semester and a summer, coming to an end before his senior year.

But Vinay wasn’t ready to give up on the project just yet.

“Vinay really wants to solve the problem in front of him,” said Collins, professor of electrical and computer engineering and biomedical engineering. “He’s engaged, focused and good at what he does. If he got stuck, he was quick to ask for help, and you never had to track him down.”

Vinay continued his research into his senior year as an independent study, which eventually became his senior thesis. His work began focusing on the frequency allocation of cochlear implants.

Each cochlear implant has a fixed number of electrodes that can send signals to the brain, and each electrode responds to a specific range of frequencies. For example, electrode 1 might cover 200-400 Hertz, while electrode two responds to 400-600 Hertz, and so forth.

How the spectrum of audible frequencies is divided between the device’s electrodes comes preset from the factory. Vinay, however, wondered if changing those ranges on an individual basis might provide some improvement in speech recognition, so he developed a program that would allow individuals to experiment with different setups.

At the end of his senior year, Vinay tried out his program on people with normal hearing by simulating how frequency allocations affects audio signals—and it worked. Now he is hoping to get the chance to try it out with people that actually have cochlear implants, as he is coming back to Duke for another year to complete a 4+1 Master of Engineering degree in biomedical engineering.

In the meantime, Vinay has kept busy by listening to the world from the perspective of a baby.

“I went to a startup networking fair toward the end of my last semester, and came across VersaMe,” said Vinay. “They have this interesting idea of using wearable devices for children to increase the quality of engagement that they have with their family.” 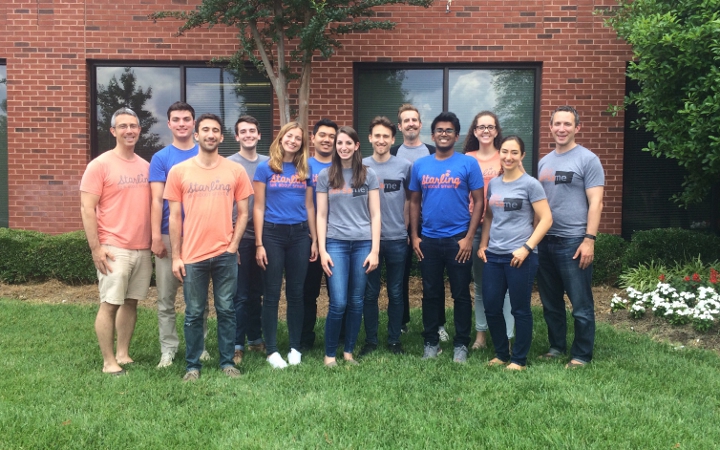 Research shows that the more children interact with and hear speech from their parents, the quicker language skills will develop—an advantage that continues into schooling and adult years. VersaMe’s idea is to have a device—called the Starling—that counts the number of words that a baby is hearing from his or her parents, so that certain goals of interaction can be met.

The challenge is that not every noise that a baby hears is speech from a family member. A listening device is constantly bombarded by noise from the outside world, conversations from the television and, as the child gets older, speech from the wearer.

Distinguishing which noises count as influential words for a child from the background noise is a difficult task. But it’s a task that has a lot in common with the challenges raised by cochlear implants.

“As it so happened, the recruiters from VersaMe have worked with Professor Collins before to improve their speech recognition algorithms,” said Vinay. “One of their first hires was even a doctoral student in Professor Collins’s lab. I was able to land the internship with her strong recommendation.”

As a mechanical engineer, Vinay has spent the summer on the hardware aspects of the Starling, like designing how it is attached to children. With his experience working with cochlear implants, he’s also analyzing audio to process it in real-time more efficiently. And because VersaMe is a startup with only a relatively small number of employees, Vinay has also had the chance to do some marketing and other various jobs.

Vinay isn’t exactly sure what his final year at Duke will bring while he’s earning his master’s degree. He could build on his research experience and pursue a PhD in a biomedical engineering field, perhaps working on cochlear implants. His internship with VersaMe might evolve into something more.  Or his education in business leadership might push him in a new direction entirely.

But whatever his path, those who have worked with him know he’ll succeed.

“It will be interesting to see what Vinay does,” said Collins. “He has that curiosity and drive that would be perfect for somebody enrolling in graduate school. But I could also see him getting really captivated by something else and wanting to graduate and go save the world.”