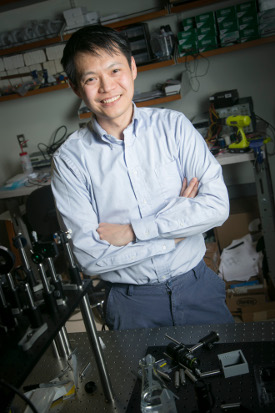 Yiyang Gong, assistant professor of biomedical engineering at Duke University, has been named a recipient of a 2017 Sloan Research Fellowship.

Awarded annually to 126 early career researchers in recognition of distinguished performance and a unique potential to make substantial contributions to their field, the award provides a two-year, $60,000 grant to support each researcher’s work. Candidates must have received their PhD on or after September 1, 2010, and work in chemistry, computational or evolutionary molecular biology, computer science, economics, mathematics, neuroscience, ocean sciences, physics or a related field.

Since the beginning of the program, 43 Sloan Fellows have earned Nobel Prizes, 16 have won the Fields Medal in mathematics, 68 have received the National Medal of Science, and 15 have won the John Bates Clark Medal in economics.

Gong will use the award to continue his research probing neural activity with high spatial and temporal precision using genetic sensors that glow in response to neural signals. Bits of DNA are delivered to neurons through a virus and encode a protein that sits on the cell membrane and responds to voltages coming from the neuron.

Gong’s goal is to target specific types of neurons and directly record the various types of voltage waveforms that different neurons create. The past few years have seen Gong improve the sensitivity of these genetic sensors and successfully demonstrate their use in cell cultures, intact tissues and a live mouse.

Read more about Gong’s work in his faculty profile.