From Grand Challenge Scholar to Forbes "30 Under 30": Q&A with Scott Martin E'14 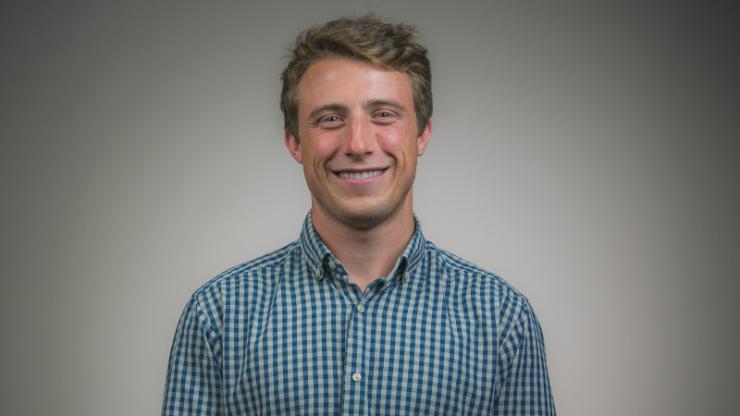 After graduating through the Katsouleas NAE Grand Challenge Scholars Program, Scott Martin was one of 14 Duke alumni recently named to the 2017 Forbes "30 under 30" list. Martin majored in mechanical engineering, minored in chemistry and completed the energy and environment certificate. After graduating in 2014, Martin now works for 8 Rivers, a Durham-based technology commercialization firm.

What does your current job entail?

My job at 8 Rivers entails looking at big problems, particularly in dormant fields that need change or innovation but are somewhat slow to attain that change. We come up with ideas to solve these big problems, develop patents, and then go out and find large corporations to invest in our ideas.

What's an example of a project you've worked on recently?

One of the main companies we've spun out is called NET Power, which is a new type of natural gas power plant that inherently captures all greenhouse gas emissions at the same cost as power plants that do not capture any carbon dioxide. We're building a pilot plant in Houston right now that I've been working on for the last three and a half years that is starting to be commissioned.

How did you come up with the idea for this power plant in Houston? How does it work?

The genesis of the idea was before my time [at 8 Rivers], but most carbon capture mechanism designs to-date use post-combustion carbon capture. Burning in air produces carbon dioxide, carbon monoxide (if it's an inefficient burn), water and a ton of nitrogen. Water condenses out really easily, so the exhaust then becomes nitrogen and carbon dioxide.

Most of the removal costs in post-combustion capture are in separating carbon dioxide from nitrogen, and then compressing the carbon dioxide to put it into a pipeline. There are lots of chemicals and processes that do this, but they are very energetically intensive and lead to a 10-15 percent drop in efficiency.

NET Power's solution is to capture carbon dioxide pre-combustion by separating air into its constituent parts to get pure oxygen and use that to burn fuel. So now, only water and carbon dioxide comprise the exhaust and no nitrogen needs separating. This process hits the same efficiencies as natural gas plants, but inherently captures all emissions.

What was the process like in going from the drawing board to actually building this power plant?

When I started working on the project in 2014, our team had just received major funding to build the demonstration plant, which is one-tenth of the scale of a full plant. It runs on natural gas, but the technology could be applied to any carbon-based fuel like biomass or coal. I was one of the process engineers that was tasked with figuring out how to take this investment and build a power plant with it, and we are now almost at the proof point of the project.

How did Duke help get you ready for your current job?

Duke gives you enormous opportunities. One of the things I was a part of was the NAE Grand Challenge Scholars Program. It was actually through the Grand Challenge Scholars Program that I got a scholarship to attend a conference in Boston, which is where I met the folks at 8 Rivers. I stayed in touch with them and, a few months later, they received their funding and hired me after graduation.

What sorts of skills did the NAE Grand Challenge Scholars Program give you?

The foundational point of Grand Challenge Scholars, which I think is a very "Duke" thing, is that students find ways to develop a project outside of the silos of academics. Part of it is getting involved in many different parts of the campus, which is something Duke engineering students excel at. They know how to get across campus and use the resources available them. And if they don't at first, Duke really teaches and motivates them to learn.

Duke students really excel when they're self-motivated, and Duke does a really good job of supporting those types of students. If you're looking to get involved, there's enormous diversity on campus in terms of academic interest and background, and as an engineer you can use that to your advantage, which is something that other engineers from purely technical schools don't really get.

What was your favorite part about Duke?

There is just such an array of interest and so many people are doing so many incredible things on campus. Your access to knowledge and opportunity is unparalleled. There's no other point in your life where you're going to have that ease of access to so many brilliant people, and it's really humbling. That's something I really miss about Duke.

What advice would you have for people who want to enter your line of profession?

It can be really difficult being a young person in the energy field, and I think it's important to not get discouraged by the other (often older) people in the room. I think one of the most important things that a young engineer brings to the table, especially when companies are dealing with new ideas, is that boundless optimism and motivation to make something work. A lot of companies want that, and it's important to not lose sight of that and not get discouraged.

These problems are really, really hard. People have been working on some of them (like water for example) in some capacity for millennia, and the problems just continue to get harder and more complex. The more optimism and hope we have in the industry, and the more people are motivated to sit at the table and bring their new ideas, I think the better things will get going forward.

It is easy especially when you are taking classes to think that rote experience is all that engineering is. But engineering is ultimately about how you take really difficult problems and distill it down to something human. How do you take a really difficult problem, or science that seems meaningless, and make it something that can have a purposeful solution. Equations and math are part of that, but ultimately engineers are tasked with taking science and making use of it. And often, making use of something means improving life for the people around you. So don't get discouraged!

The other difficult thing about being an engineer is that sometimes you develop ideas with knock-on consequences. It's easy to self-select ideas and creativity because you can see where the next steps go. But that doesn't mean something shouldn't be pursued because people will still learn a lot from your missteps.

Can you tell us about an experience where you faced a challenge you didn't see coming and how you dealt with it?

I've found that one of the most difficult challenges is simply understanding. You may think that we engineers speak this common language; we know math and can make things happen with numbers alone. That's just not true. What happens when someone doesn't speak the same language as you? Or they come from a different culture or their business etiquette is different from yours? Now on top of that, consider trying to teach an already complex problem using your own culture and language. This project has been difficult by having to be able to switch gears from one culture to another.

People say engineers aren't social, but how do people build the Golden Gate Bridge or the SpaceX rocket? That involves the mobilization of thousands of people – and when you consider the greater public, millions or more. You can't say engineers don't know how to be social, don't know how to teach, or don't know how to present, when they must communicate these really difficult issues. Language and culture is something you have to take really seriously. The world demands us to be global now. Find yourself a way to get out into the world because this experience is so important.