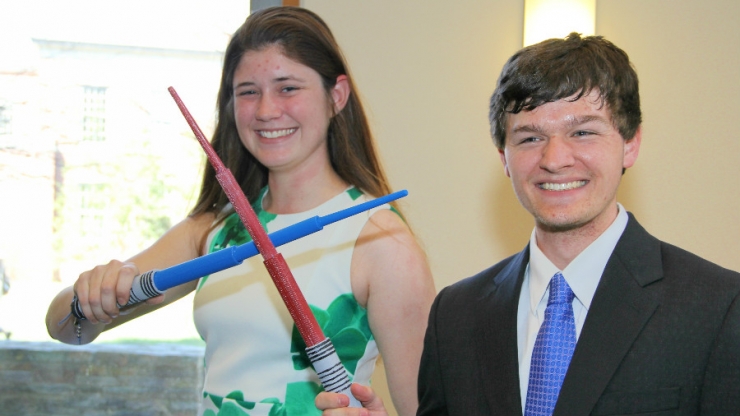 Even before they came to the Pratt School of Engineering, first-year students in the EGR 121 class knew the best thing inside a McDonald’s Happy Meal is the toy – but now they also know how they might design one.

The major project of the Engineering Innovation course in Pratt's Department of Mechanical Engineering and Materials Science is to work in a two- or three-student team to design a toy that will fit in a Happy Meal box. It should be safe and fun, and come in at a reasonable cost. Prototypes are created and, in the end, the proposal is pitched in a few short minutes to a committee of professors and teaching assistants.

This year, students received an inside look at the process from Michael Edelstein P’20, a father of a student in the class and a vice president at the firm that designs toys for McDonald’s Happy Meals – a fact which makes that company one of the largest manufacturers of toys and premium products in the world.

For their proposal, students Barbara Groh and Samuel Lester drew inspiration from a galaxy far, far away: toy lightsabers to promote the next film in the Star Wars saga.

In a dramatic flourish at the top of their pitch, Groh and Lester flicked their wrists and the cylindrical toys, at first short enough to fit in McDonald’s iconic paperboard Happy Meal box, telescoped to more than a foot in length.

“The prototypes are 3D-printed ABS plastic, but we think the final product would be made in polypropylene,” said Lester, noting the low cost and known food safety of that material.

In a dramatic flourish, the students flicked their wrists and their toys, at first short enough to fit in a paperboard Happy Meal box, telescoped to more than a foot in length.

Even though they liked what they saw, their instructors wanted to know the numbers. Groh had answers ready. She said the team had calculated sales in the millions, with each one costing an efficient 38 cents to make.

They had a marketing plan, too – the toy, they said would come with interchangeable empire and rebellion symbols, allowing a child to start their play story by choosing a side in the fight to control the galaxy.

Other proposals included a McDonald’s-branded enchute inspired by Central American cup-and-ball toys, a spring-loaded ball shooter and soccer goal, and a rubber band-powered airplane made up like a bird of prey.

“The purpose of this project and the class is to introduce first-year students to design thinking and the design process through hands-on work,” said course instructor Rebecca Simmons, an assistant professor of the practice in the Department of Mechanical Engineering and Materials Science, who teaches several introductory engineering classes focused on design and analysis. “It all comes together in the pitch, where students not only have to bring their prototype and their data, but their enthusiasm and energy for the idea they have developed.”

Edelstein, vice president for brand partnerships and retail product for The Marketing Store, the Chicago-based company that helps design and make Happy Meal toys for McDonald’s restaurants around the world, spoke to students the day before they made their project pitches. He phone-conferenced colleague engineers into the classroom who work every day through problems much like those the students were tackling. They discussed the fast-paced and complex two-year process from design concept to manufacturing and distribution.

“Engineers have a lot they have to balance and get right,” said Edelstein, whose son Ben is a Pratt first-year student. “They have to make sure each product is fun and fits its marketing purpose, but they also have to consider safety, cost and the limitations of materials and manufacturing processes.”

The students appreciated how closely their project matched industry experience, said instructor Greg Twiss, an expert in product development and an adjunct associate professor in the Pratt School of Engineering.

“It’s hard to replicate that exactly in an academic environment, but this project comes very close,” he said. “Importantly, it also shows that in the product design process there is creativity, but there is also ambiguity and factors to balance. There is no one ‘right’ answer. That’s the biggest lesson.”