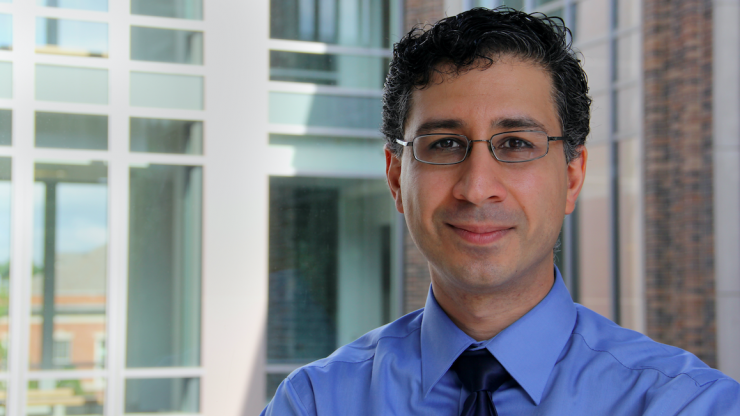 Sina Farsiu, the Paul Ruffin Scarborough Distinguished Associate Professor of Engineering, has been named a Fellow of the Optical Society of America (OSA). Farsiu was cited for his “outstanding contributions to optical image processing and biophotonics.”

Farsiu is the director of the Vision and Image Processing Laboratory in Duke’s Departments of Biomedical Engineering and Ophthalmology, where he has been instrumental in introducing modern image processing and computation methods into the field of ophthalmic imaging.

He is a pioneer in development of artificial intelligence (AI) systems that can automatically detect multiple diseases of the eye based on optical coherence tomography images of the retina. He has also developed AI algorithms that can tailor treatment to specific patients afflicted by diabetic macular edema, a leading cause of blindness in working-age Americans.

Farsiu has been recognized for helping to produce the first portable adaptive optics scanning laser ophthalmoscopy (AOSLO), which allows researchers to see neurons in the eyes of young children in the clinical setting. He furthered this work by developing the first AI algorithm that can autonomously locate difficult-to-spot photoreceptors on AOSLO images.

“I’m humbled to be elected as a Fellow of the Optical Society,” says Farsiu. “Considering that I have no formal education in optics or biophotonics, OSA’s recognition of my scientific achievements is also a testament to the intellectual generosity of my colleagues, and the interdisciplinary collaboration opportunities at Duke.”

OSA Fellows are nominated by their peers as members of the society who have served with distinction in the advancement of optics and photonics. Founded in 1916, The Optical Society is the leading professional organization for scientists, engineers, students and business leaders who fuel discoveries, shape real-life applications and accelerate achievements in the science of light.