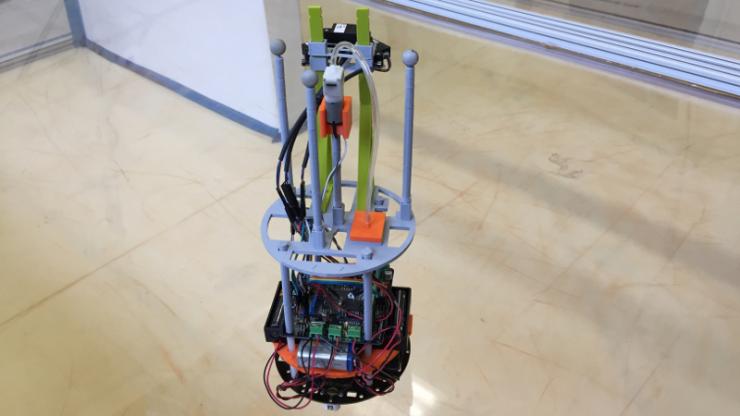 Engineers at Duke University are developing a smart robotic system for sniffing out pollution hotspots and sources of toxic leaks. Their approach enables a robot to incorporate complex calculations of airflows in confined spaces made on the fly, rather than simply guide the robot to 'follow its nose'.

“Many existing approaches that employ robots to locate sources of airborne particles rely on bio-inspired educated but simplistic guesses, or heuristic techniques, that drive the robots upwind or to follow increasing concentrations,” said Michael M. Zavlanos, the Mary Milus Yoh and Harold L. Yoh, Jr. Associate Professor of Mechanical Engineering and Materials Science at Duke. “These methods can usually only localize a single source in open space, and they cannot estimate other equally important parameters such as release rates.”

But in complex environments, these simplistic methods can send the robots on wild goose chases into areas that contain no sources of the leak but where the concentrations are artificially increased by the physics of the airflows.

“If somebody is smoking outside, it doesn’t take long to find them by just following your nose because there’s nothing stopping the air currents from being predictable,” said Wilkins Aquino, the Anderson-Rupp Professor of Mechanical Engineering and Materials Science at Duke. “But put the same cigarette inside an office and suddenly it becomes much more difficult because of the irregular air currents created by hallways, corners and offices.”

In a recent paper published online in the IEEE Transactions on Robotics, Zavlanos, Aquino and newly minted PhD graduate Reza Khodayi-mehr instead take advantage of the physics behind these airflows to trace the source of an emission more efficiently.

Their approach combines physics-based models of the source identification problem with path planning algorithms for robotics in a feedback loop. The robots take measurements of contaminant concentrations in the environment and then use these measurements to incrementally calculate where the chemicals are actually coming from.

“Creating these physics-based models requires the solution of partial differential equations, which is computationally demanding and makes their application onboard small, mobile robots very challenging,” said Khodayi-mehr. “We’ve had to create simplified models to make the calculations more efficient, which also makes them less accurate. It’s a challenging trade-off.”

Khodayi-mehr built a rectangular box with a wall nearly bisecting the space length-wise to create a miniature U-shaped hallway that mimics a simplified office space. A fan pumps air into the corridor at one end of the U and back out of the other, while gaseous ethanol is slowly leaked into one of the corners. Despite the simplicity of the setup, the air currents created within are turbulent and messy, creating a difficult source identification problem for any ethanol-sniffing robot to solve.

But the robot solves the problem anyway.

The robot takes a concentration measurement, fuses it with previous measurements, and solves a challenging optimization problem to estimate where the source is. It then figures out the most useful location to take its next measurement and repeats the process until the source is found.

“The physics-based models are not perfect but they still carry way more information than just the sensors alone,” added Aquino. “They don’t have to be exact, but they allow the robot to make inferences based on what is possible within the physics of the airflows. This results in a much more efficient approach.”

These physics-based planning algorithms aren’t yet faster than heuristic methods, but they can still be run onboard small robots and are much more robust. They can also handle situations with multiple sources, which is currently impossible for heuristic approaches, and can even measure the rate of contamination.

The group is still working to create machine-learning algorithms to make their models even more efficient and accurate at the same time. They’re also working to extend this idea to programming a fleet of robots to conduct a methodical search of a large area. While they haven’t tried the group approach in practice yet, they have published simulations that demonstrate its potential.

“Moving from a lab environment with controlled settings to a more practical scenario obviously requires addressing other challenges too,” said Khodayi-mehr. “For example, in a real-world scenario we probably won’t know the geometry of the domain going in. Those are some of the ongoing research directions we’re currently working on.”