If you asked Ivonna Dumanyan just five years ago where she’d be today, starting a running tech company at Duke University would never have crossed her mind. But thanks to a lot of hard work and the entrepreneurial resources provided across Duke’s campus, her present-day reality has outstripped her imagination.

Born in the Ukraine, Dumanyan immigrated to the United States with her family when she was five years old. She spent the next twelve years growing up in the southern New Jersey city of Vineland, attending a large but academically challenged school district. Without expecting much to come of her dedicated hard work, Dumanyan envisioned starting out at the local community college for two years or following her passion for rowing to an athletic scholarship at a larger university. 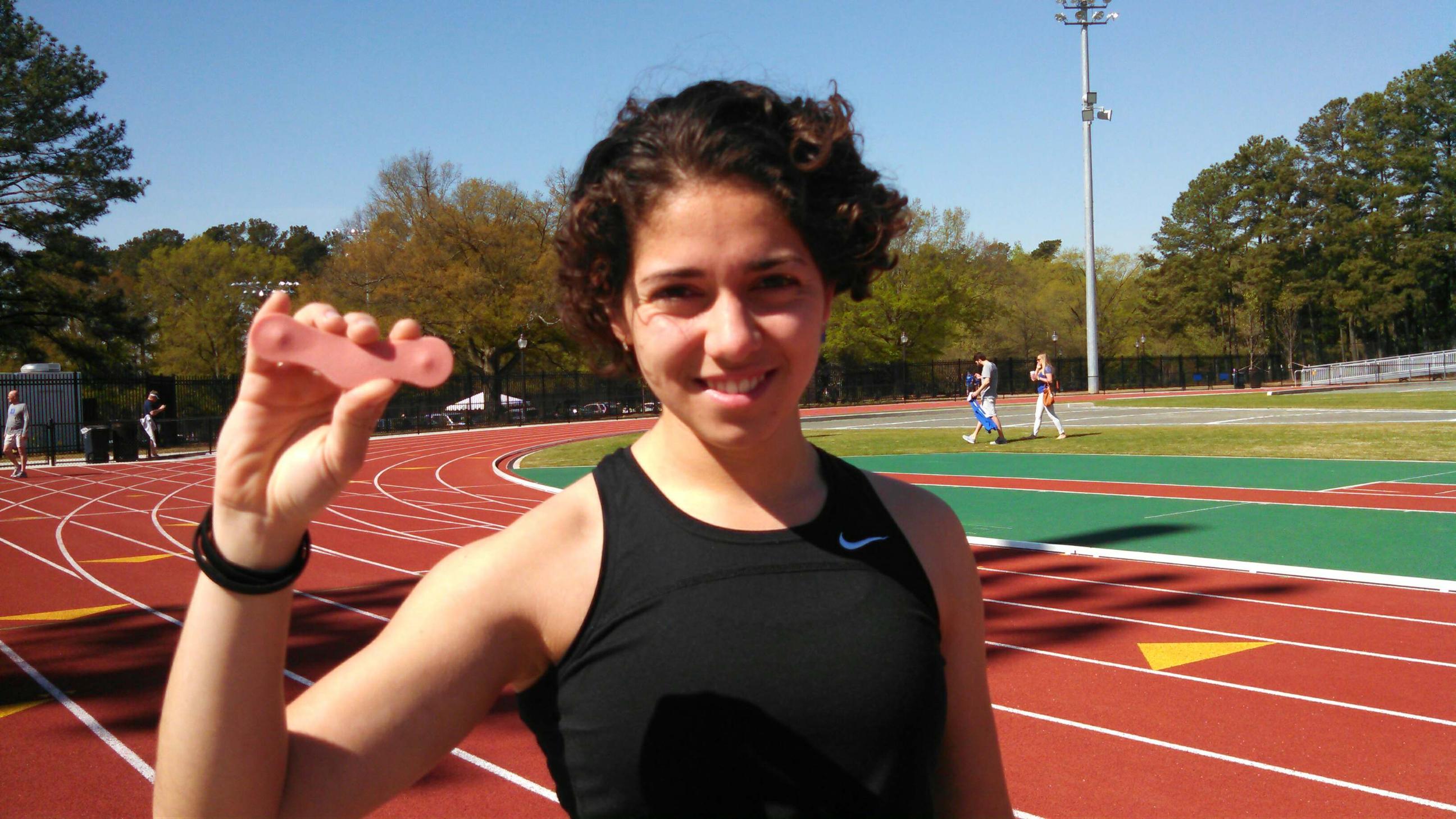 “I honestly didn’t think that I’d ever be coming to such a prestigious university, but Duke has proven me wrong in a really good way,” says Dumanyan, who received a full academic scholarship to attend the school. “Duke has given me everything I need to make it here, and as soon as I got here all the doors just seemed to open for anything that I tried to do.”

Dumanyan joined the crew team and pursued a degree in the Department of Mechanical Engineering and Materials Science in Duke’s Pratt School of Engineering. But just a year into her education, her path took yet another detour when she befriended Gabrielle Levac. 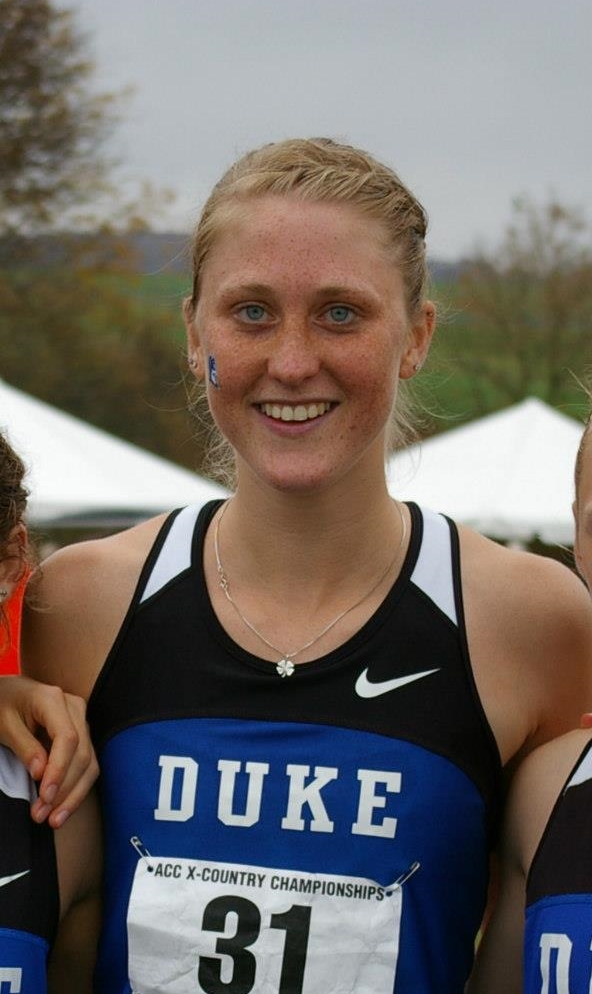 Levac was two years ahead of Dumanyan and an accomplished athlete on Duke’s track team majoring in statistics. She also had a history of injuries, having had multiple surgeries before she even turned 21. The two lamented that there were few—if any—resources outside of the training room for athletes to monitor their form with.

So they decided to do something about it.

“At the beginning of last summer, I thought to myself, ‘Why not go for it? Let’s give it a try,’” recalls Dumanyan, now a junior. “We decided to build a device to detect abnormalities in running form.”

Levac, who graduated from Trinity in 2014, had plenty of experience running and knew what competitive athletes could use in such a sensor. But as statistics and mechanics buffs, neither had any experience at all with electrical and computer engineering. The pair would have to look outside of their own curriculum to pursue their ambitions—a prospect that proved to be no problem at all.

Dumanyan applied for a fellowship through Duke’s Smart Home Program, which enables students to do project-based design research in their engineering major and receive independent study course credit. With the fellowship’s support, she began testing different ways of tracking heel stability through pressure sensors, accelerometers, and gyroscopes.

She also received financial and technical support through Duke’s Innovation Co-Lab, which offers a grant program for building the next wave of technology for the Duke Community. Her grant provided funding for materials like sensors and batteries for prototyping, and the Co-Lab’s office hours provided vital technical help.

She also knocked on a lot of doors.

“Quite honestly, I just popped into office hours for some of the Electrical and Computer Engineering classes and asked questions,” says Dumanyan. “I’ve been warmly received everywhere I’ve asked for help, which has been a fantastic experience.”

The device that has evolved from the project uses gyroscopes and accelerometers adhered directly to the skin of a runner’s heel to measure its displacement, which is a metric for measuring pronation. Pronation is the inward or outward motion of the heel that causes a collapse or outward bowing of the foot’s arch. 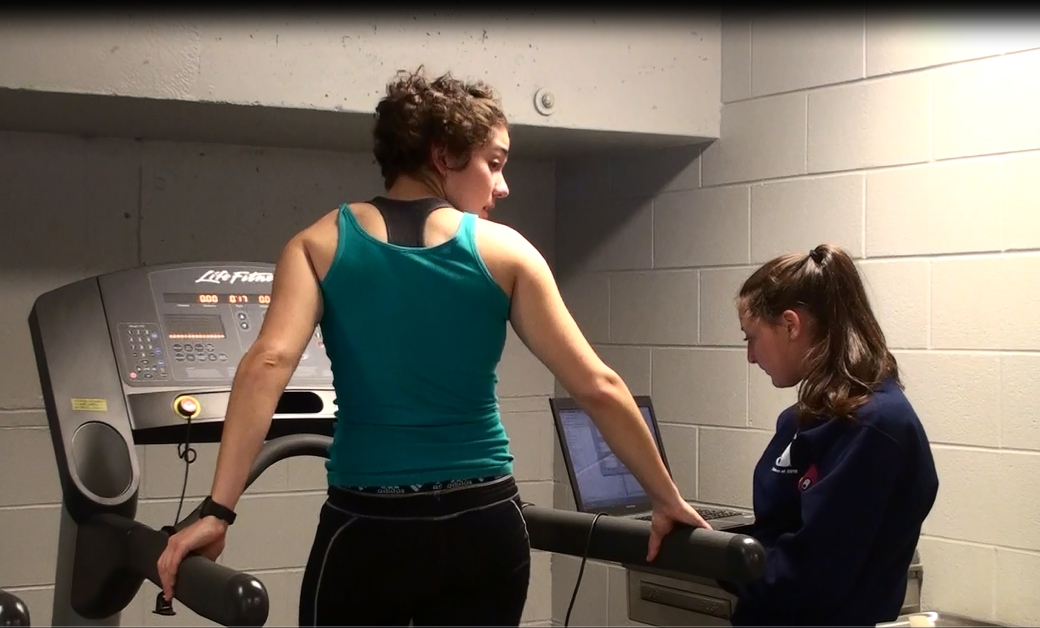 Since pronation is an inherent instability, it causes a lot of problems elsewhere in the body—in the knees, hips, ankles and back. And over pronating or under pronating can be quite painful on the foot. It’s been linked to planar fasciitis, one of the most common causes of heel pain involving inflammation of a thick band of tissue. The goal of the sensor system is to detect when a runner’s foot is pronating incorrectly and warn the athlete so that he or she can correct their form or even stop and strengthen before an injury occurs.

In mid-March 2015, Dumanyan and Levac were ready to formally test their working prototype by putting it on some actual athletes and gathering real data. Their plan is to compare their data with traditional running mechanics analytics taken from video to prove their device is accurate. Once the data and device are independently certified by two separate physical therapists, an angel has already committed to shepherd the budding company through the manufacturing of beta devices, the development of an integrated app, and the launching of a Kickstarter campaign.

If all goes to plan, the company they’ve dubbed BioMetrix could have its funding campaign launched by November 2015.

“The whole process has raised my self-confidence quite a bit,” says Dumanyan, who has since left rowing and become more serious about running with Levac’s support and training. “I’ve realized that, while we’re getting a degree from Pratt, we’re not confined to the major we’re in. We’re not in a box—we’re in a fluid system where the exchange of ideas and talents is free-flowing.”