Science isn't short on laws, but here's another to consider: When you spend time with Libby Bucholz PhD'08, you're learning something.

We're studying ultrasounds—specifically, the mechanics of ultrasounds and how to optimize their energy transmission. By "we" I mean Bucholz's Biomedical Engineering (BME) 303: Modern Diagnostic Imaging Systems class that I'm observing, one of four BME courses she teaches each year. Never an engineer, I expected to be drowning in labyrinthine concepts today. But a half-hour in I find myself—like the rest of the students here—trying to solve equations like a nascent Will Hunting, nodding as she highlights the importance of using matching layers to maximize energy transmission. 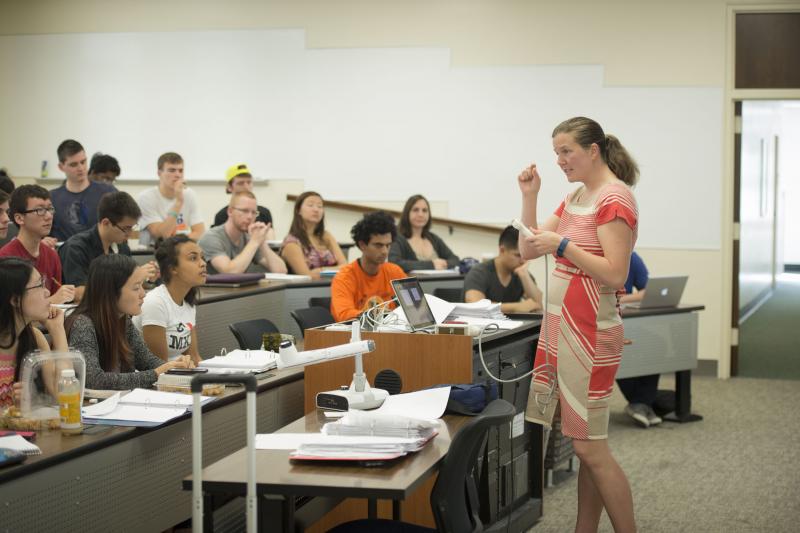 "I was worried—you came to not a very exciting [class]," Bucholz says the next day, a strange comment given her energy and presence in the lecture. But then she describes her other lessons, which eschew the traditional chalkboard setup for more eccentric implements.

Flashlights, wooden blocks, bicycle tires and Tic-Tacs are all mainstays of Bucholz's teaching kit, helping to create analogies that explain concepts like computerized topography (CT) scans, magnetic resonance (MR) signals and piezoelectric transducers. The repertory of hands-on comparisons, which Bucholz has built out during her five-plus years of lecturing, proves essential in enabling students to comprehend the material.

And her toolbox is ever-expanding. Recently, she has begun having classes play an adapted version of the word-guessing party game Taboo — "MRI Taboo," as she describes it. The goal? Help her students understand nuanced terms (e.g. "transducer") by relating them to other key concepts covered in class. Even her "not exciting" class is steeped in concrete, peer-validated examples to inform her audience of the curriculum's real-world applications.

"It's sort of my philosophy, I think. I want to create connections to the material and make sure the students care about it," says Bucholz, who’s also the associate director of undergraduate studies in BME. "That’s my goal, to make them excited and interested. And, hopefully, that will help retention."

Creativity has always permeated her teaching, although committing to her methods required some willpower. When she first shared with other faculty her idea to explain CTs using flashlights, she received a lot of questioning looks.

Shrugging off her embarrassment, Bucholz went through with her plan and found it made class engaging for students and herself. Now, whenever she sees or brainstorms a relatable demonstration, she doesn't hesitate to use it. Which explains the bike tire she borrows from the Physics department each year, rotating it to mimic an MR signal for her students.

"Some kids are like, 'Why are you bringing your [bicycle tire] in?'" she says. "And then I show them, and they're like, 'Oh my gosh, that's really cool.'"

The proof is in the participation: Even though the semester is nearly over, the 54-person lecture hall is almost at capacity. Bucholz peppers the students for input, checking their intuition by soliciting guesses via iClickers, asking trick questions to make sure everyone is following, and having individuals outline their reasoning on the board in front of the class. She knows everyone's name, unsurprisingly, but what's striking is the variety of names in play—the input isn't springing from one or two all-star students, but rather all over the room.

After class, she seeks a volunteer to compile a one-minute summary of core concepts to share during the next lecture. Nearly a third of her students respond.

"I have never been more compelled to do research beyond the scope of a class and ask questions as I have during her classes," wrote Lauren Heckelman ’16, one of the students who nominated Bucholz for the ADUTA. Heckelman credited Bucholz with inspiring her to pursue teaching, adding that "if I can one day impact a single student the way that she has influenced me, I will consider my career a success."

The ADUTA, first awarded in 1971, is the only teaching award sponsored by the Duke Alumni Association. This year, 93 students submitted nominations of 73 different professors. Bucholz was chosen by a student selection committee.

The nominations are touching, Bucholz says, as they’'e coming from her "really awesome" students. Moreover, the award further validates that her style works for all parties involved. Given the fun Bucholz is having teaching, and the response she's eliciting from her students, the flashlights and blocks aren't going anywhere.

"I know a lot of students—they're learning, they're engaged, they're present, they come to class," she says. "Who cares if it's a little silly or different?”